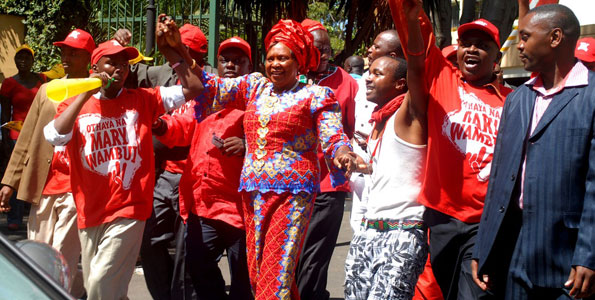 Mary Wambui, I feel for her so much. This is a woman who has been the wheeler-dealer in chief in the entire Narc/PNU administration. Â Where Lucy destructs, she constructs- a checkmate of the presidentâ€™s conscience.

She has fixed myriad things including hosting Artur brothers thus shielding mzee from shots fired at him over the saga. Actually she had been the defacto Â Othaya MP being the mzee point man on the ground.

But now, due to Uhuruâ€™s arrogance or do I say ignorance, the De facto mother of the nation has been kicked out of the TNA list which comprised predominantly of men. Now because of Uhuru playing liar, Othaya is on fire.

He lied that TNA nominations would be fair, only to end up shambolic- the worst party nominations than even the KANU mlolongo days. Most chaotic in the nationâ€™s history. They used Kasuku tins, when he promised it would be digital. Not surprising though, since Uhuru is analogue old and in his 50s.

Kimunya, the tribalist PNU-Secretary General wasnâ€™t a TNA candidate but got a TNA certificate. Windows 8 cannot run on a 1985 computer, canâ€™t happen. UK is chewing more than he can bite.

Uhuru the dictatorâ€™ game plan in the TNA primary was to midwife a process that produced yes men type of Central Kenya parliamentary group without independent minds like Mary Wambui who can challenge his thinking.

Instead he opts to give direct ticket to karusiâ€™s proxy Gichuki Mugambi- a lazy drunkard technocrat who Jimmy wants as MP so he can puppeteer, then dislodge in 2017. That would save him the trouble of running against a step-Mom in 2012. Let it be known thatÂ  Jimmy is positioning himself for a cabinet secretary position.

Purveyors of the truth like Mary Wambui are being kicked out of TNA and being replaced by peddlers of liers. Reason? Because the media has been associating Wambui with the â€œShetani initiativeâ€ that saw Mudavadi being rammed down the Jubilee throat.

She told Uhuru to his face that he cannot beat Raila Odinga, unless he joins her in crafting a project MM. Take this to the bank, her prophesy will come to pass. The shetani FulaniÂ  will become a prophetess, because she is.

Thanks to The Othaya activist, Mudavadiâ€™s UDF had been swallowed into Jubileeâ€™s belly but was vomited midstream through the swallowing process. Whether the puke has been flushed down the toilet will be known on March 4th when colorless Kioni and MaDVD will only end up behind Karua, and slightly ahead of Kingwa Kamenchu.

Wambuiâ€™s TNA woes have huge implications on Amani, because as she concentrates her finances in surmounting her TNA fiasco, campaign cashflow checks to UDF will continue to diminish. Wambuiâ€™s goal was to hang on in TNA as she prepares a presidential run in 2017- in the footsteps of Nana Rawlings- former Ghanaian first lady.

A political love triangle pitting Uhuruâ€™s TNA, against UDF and Mary Wambui/Kioni(State House) has been public knowledge for some time.

As the architect and key financier of the UDF Mudavadi project, TNA naturally developed cold feet towards her. Also the psychological blow it had on the â€œlegalâ€ Kibaki family in making it look like she was Kibakiâ€™s preferred political heir at the expense of the erratic and unpredictable official first lady who invaded Nation and Standard media houses in pyjamas right in the middle of the night.

Mary Wambui has been a cornerstone of Kibakiâ€™s success not just in politics, but also in business, being the handler of the toughest of assignments. She has been a woman whose word you can trust, you send her to mzee and itâ€™s like a tweet sent to Mzeeâ€™s huge desktop.

As man married to a nagging and drama queen woman, Kibaki seeks solace and confides in Maria as he fondly calls her. And she hasnâ€™t disappointed, she has fixed things that only people like Mark Too could fix during the Moi government.

Uhuru underrates Wambuiâ€™s influence in the greater Central Kenya, but if she could flex her muscle, TNA could be in for a rude shock. To Nyeri County residents, sheâ€™ s like a goddess, generous to the have-nots, no wonder she defeated Jimmyâ€™s candidate in the shambolic TNA primary, despite numerous rigging attempts by Uhuruâ€™s proxies. Mary is the only politician with a spine and umph! To take on Uhuru in Central, and where she goes, so will Nyeri County.