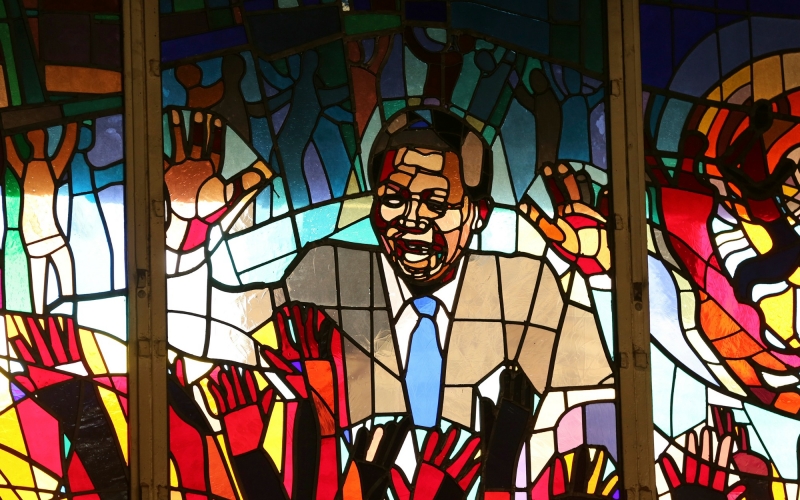 Nelson Mandela lived one of the great lives of the twentieth century. He was a political prisoner who became a free man, a freedom fighter who achieved reconciliation, and a president who fought for equality and development. “Mandela showed us that one man’s courage can move the world,” U.S. President Barack Obama said on his recent trip to South Africa. For many, Mandelaâ€™s life is an enduring reminder that hope and activism can change history for the better.

Yet South Africa is hardly an unqualified success story. The unemployment rate hovers just under 30 percent, and nearly a quarter of South Africans live at or near the poverty line. A United Nations report recently revealed that 1.4 million South African children live in homes that rely on dirty streams for drinking water, 1.5 million do not have access to flushing toilets, and 1.7 million live in shacks with neither washing nor cooking facilities. Almost six million South Africans have HIV/AIDS, and the countryâ€™s young population is growing rapidly: nearly 40 percent of the population was born after Mandelaâ€™s release from prison in 1990.

Outside observers often try to separate Mandelaâ€™s past from South Africaâ€™s present. If things have fallen apart, the argument goes, it is only because Mandelaâ€™s political party, the African National Congress (ANC), failed to follow him to the promised land. Even in his mid-nineties, Mandela was aloof yet omnipresent: a constant reminder of the nobility of South Africaâ€™s anti-apartheid past and a yardstick that implicitly measured the shortcomings of todayâ€™s ANC leaders.

Would another Nelson Mandela cure South Africa of its ills? This question is at the heart of the debate about Mandelaâ€™s legacy and South Africaâ€™s future. But it is the wrong question. Although Mandelaâ€™s story has had many chroniclers, his grand strategy — specifically, his role in the international fight to define what South Africa was and what it might become — has been curiously underappreciated. It raises a fundamental and more important question: What is South Africa? It is impossible to understand South Africa today without appreciating the effects of Mandelaâ€™s complex answer.

Mandelaâ€™s genius stemmed from the way in which he talked about South Africa.

Mandelaâ€™s genius stemmed from the way in which he talked about South Africa. As a young activist in the ANC in the 1950s, he belonged to a community that was rife with disagreement. African nationalists sought black primacy within the freedom struggle, communists wanted capitalismâ€™s end, and liberals hoped for true democracy. Mandela navigated these ideological landmines with unusual dexterity. In historian Tom Lodgeâ€™s words, his approach was â€œprimarily about enacting stories … and only secondarily about ideological vision.â€ Mandela did not proselytize a viewpoint so much as build partnerships among different groups that wanted to end apartheid.

Pulling this off was not an easy task in mid-twentieth-century South Africa. Located at the meeting point of the Atlantic and Indian Oceans, the country was an unusually diverse place, shaped by the historic confluence of African peoples, European settlers, and Asian migrants. This diversity made the country a microcosm of the human condition for some, a dynamic investment opportunity for others, and an entrepÃ´t that sharpened the debate about colonialism and nationalism for still others.

In the face of this diversity, Mandela blended storytelling and politics brilliantly. As early as 1962, he articulated a strategy that focused as much on psychology as it did on combat. Mandelaâ€™s stated objective was not to terrorize white society but to â€œdestroy the legality of the government,â€ principally by shaping the consciousness of the masses and creating bridgeheads in the international arena. As a means toward this end, he wrote, the ANC had to cultivate itself as a â€œparallel authority in the administration of [South African] justice,â€ which meant different things to different audiences and required a message that smoothed the disagreements among apartheidâ€™s critics.

Mandelaâ€™s dexterity was especially obvious abroad. During his travels in the early 1960s, he preached nationalism across decolonized Africa, celebrated the Cuban revolutionary Fidel Castro in conversations with Third World leaders, and lauded liberalism to audiences in London. He maintained this flexibility after his return to politics in 1990. Mandelaâ€™s anti-apartheid movement was simultaneously a bulwark against neoimperialism (in Havana) and an extension of the U.S. civil rights movement (in New York). The â€œnew South Africaâ€ would be a â€œunited, democratic, non-sexist and non-racial country,â€ he assured the Swedes in 1990. â€œFirmly aligned with regard to the fundamental and universal issues of human rights, the right and possibility of every individual to full and unfettered development, the right of every country to determine its future, protection of the environment and peace in a world that should be free of regional conflicts and the threat of a nuclear war.â€ It was a vision to satisfy everyone — and a performance that cultivated the ANCâ€™s international legitimacy.

This strategy required a large support network. And indeed, Mandela relied on an expansive group of supporters throughout his political career. After his arrest in 1962, for instance, the ANCâ€™s president-in-exile, Oliver Tambo, rallied international audiences with speeches and activism, carefully employing Mandelaâ€™s story to bolster the ANCâ€™s pluralist message. Within South Africa, Mandelaâ€™s second wife, Winnie Mandela, an influential organizer in her own right, tapped into youth sentiment by recasting her husband as a champion of black consciousness in the 1970s. In the early 1990s, as Mandela sparred publicly with F. W. de Klerk, the last president of apartheid South Africa, his subordinates within the ANC, Cyril Ramaphosa and Thabo Mbeki, negotiated South Africaâ€™s first multiracial elections with the Nationalist government. By the mid-1990s, Madiba — the clan moniker that followed Mandela into public life — was merely the outward face of an operation moving in several directions at once.

This strategy led to inevitable problems when Mandela took the reins of government in 1994. As the journalist Patti Waldmeir has noted, local newspapers were not completely unjustified when they asked, â€œWill the real Mandela please stand up?â€ The president contradicted himself often in the mid-1990s, in part because he faced an impossible task. Having designed a strategy that purposefully reflected the viewpoints of so many different groups, Mandela came to preside over a constituency that included unemployed squatters, wealthy businessmen, liberal intellectuals, and young nationalists. As a confidential ANC report admitted in 1991, the organization ran the risk of being â€œpigeon-holed within the confines of populist rhetoric and clichÃ©.â€

Turning Mandelaâ€™s pluralism into a coherent governing doctrine was difficult. Mandela is remembered today mostly for his symbolic acts, gestures that â€œmade South Africans feel good about ourselves,â€ in the activist Desmond Tutuâ€™s words, such as embracing the countryâ€™s national rugby team, the Springboks, during the 1995 Rugby World Cup. Mandela developed actual government policy slowly as he negotiated his countryâ€™s constitution between 1994 and 1997, taking a hard line on multiculturalism while relinquishing his commitment to wealth redistribution. In Mandelaâ€™s words, it was at a World Economic Forum in Davos, Switzerland in 1992, when he â€œrealized, as never before, that if we wanted investments . . . we had to remove the fear of business.â€ Storytelling could only go so far.

South Africa today is a reflection of Mandelaâ€™s presidency and the grand strategy that preceded it. By cultivating such a pluralist stance toward anti-apartheid activism, Mandelaâ€™s ANC successfully ended the legitimacy of South Africaâ€™s minority white government. These efforts, however, cultivated unusually high expectations among the supporters who embraced the ANC for reasons as diverse as South Africa itself. The resulting dissonance has made South Africa a paradox: imbued with a rich vocabulary of civil, political, economic, social, and human rights, the country remains plagued by pervasive income inequality, structural unemployment, and widespread poverty.

Another Nelson Mandela would not cure South Africa of these ills. To thrive in the twenty-first century, the country needs not hope and activism but technocrats and engineers who can develop workable solutions to the messy realities of urban blight and rural poverty. This perhaps would be Mandelaâ€™s message to the generation born after 1990. â€œThere are good men and women in all communities,â€ he reflected shortly after his retirement in 1999. â€œThe duty of the real leader,â€ he asserted, is not only to bring these people into the fold but also to â€œgive them tasks of serving their community.â€ Modern South Africa needs a leader who can do the latter.