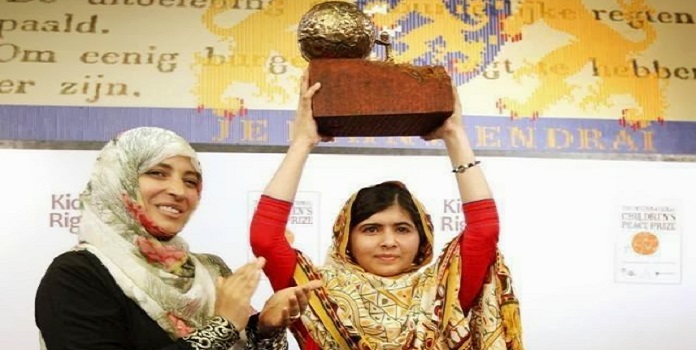 Let’s be Objective- a little!
By George Morara
Malala of Pakistan is a perfectly ordinary girl – definitely growing up in a tough country with religious extremism… She defies the death threats and keeps going to school- like all the other girls! Many of whom are her friends and still doing the same!

She gets shot! Many others are killed! She gets singled out, given state-of-the-art care- recovers and suddenly she’s at the UN giving a speech… Before we know it- Malala wins the Nobel Peace Prize! The youngest laureate ever! For what?

I mean there are surgeons the size of Dr Ben Carson- leaders like JosÃ© Mujika who donates 90% of his salary and leads an ordinary lifestyle no different than his fellow citizens – better still scientists pioneering in many fields in the Sciences and Arts!

Once the West realised Independence would surely come in South Africa, they moved quickly and created the ‘icon’ Nelson Mandela’! For decades he was on the terror list in the secret service agencies- business went on as usual with the apartheid regime!

When Mandela took over, it was mass forgiveness for the evil regime and all former collaborators and business associates in the West- and massive poverty for the very people that Mandela was supposedly fighting to free from the manacles of racial segregation, poverty and injustice! By the time of his death, South Africa, and indeed Africa whose platform for the statesmanship that he’d used, was in a worse off situation than he checked into his much published room in Roben Island. We were more hopeful then! Needless to mention, Mandela along with de Klerk were recognised as far as Scandnavia for their mutual fight for freedom… Of course I want to pause to laugh!

Some would say am jealous… But for what precisely because young beautiful Malala is just an ordinary girl who until very recently was just achieving perfectly ordinary milestones- she did absolutely nothing special that girls her age in her country weren’t doing! She’s obviously been singled out for a purpose!

The West being proactive they want to prepare a leader to serve their interests. Former Mr 10% now likely 50 or more % Zardari is perfectly serving the interests of America and has his son Bhuto Jr. in the pipeline having sacrificed his beautiful wife and made a deal with the previous equally corrupt dictator Pervez Musharraf… Malala is in the queue somewhere in the line. Right now she’s in the brainwashing process! By the time it’s time, nobody would question the historical ‘youngest’ Nobel peace prize winner ever!

The losers are the unwittingly rich but in reality the poor who live in the remote valleys where America loves to blow innocent people in the name of ‘fight against terrorism’- killing at least a 1,000 innocent people for every real terrorist- and with no Zardari questioning it!

Malala would be a perfect instrument in convincing the masses that American means well. It’s a powerful tool in winning the hearts and souls of young Pakistanis who’d be easily confused as to who the real terrorists are!

Let’s face it! The ‘war on terror’ is here to stay! Iraq or Syria aren’t going to recover tomorrow, nor the day after! The West is loving it! Today they’d be arming the terrorists. Tomorrow they have reason when all other legal avenues have failed to intervene. When you study the intervention carefully- you suddenly come to the realisation that you are indeed the fool!

Since the air strikes on ISIS began for example- The Iraq Army a little gained control which boosted morale! Morale to push into a trap! ISIS has since reached the outskirts of Baghdad- as close as 10 miles! And gaining more ground in Syria where permission wasn’t even sought …
Turkey joined in and whoever wishes to sponsor the terror, be it Jerusalem or Mecca, they are at Liberty! Old enemies are suddenly allies on this one!

The day terrorism Hussein Obama won the Nobel Prize with his tongue only, the whole thing lost meaning! Among the last genuine winners were the ranks of Wangari Mathaai and Mother Teresa- people who for decades had been unbreakable in their quest for freedom from poverty and hunger for and with the ordinary poor! Tangible reasons for any recognition!

I did actually write voice my opinion that Barack Obama’s prize be withdrawn. I am now asking the the Nobel Committee be disbanded altogether- it’s becoming a nonsense!

By all means Britain and America can sponsor Malala through school and college- but for goodness’ sake, we aren’t fools! And for the BBC. Am not saying anything!

All the problems we are seeing on the planet right now would be resolved if those in position of leadership everywhere especially the West were honest!

Did you know the President Sirleaf of Liberia is regarded as the 70th most powerful woman in The World! And one of the handful of Africa Nobel Prize Laureates… Then watch Ebola ravage her country! And the BBC won’t tell you about Botswana- it’s a success story there…It’s really not adding up everywhere you look!

If only Africa was equally proactive- we wouldn’t let Obama urinate on us by opening an African Leadership Initiative! The con is in the name! It’s just little more Malalas in the making!

Colonialism never ceased, just mutated and we are in it for a long time so long as our leaders are engrossed in squandering the public purse! But don’t worry- some of us are stirring from our slumber- slowly but surely!

The truth is we won’t live to see freedom and justice, in Africa or elsewhere already infiltrated- but we must teach our little ones true history and inspire them to carry the mantle… Even if just to shine the light, in this dark world!

Sorry folks I haven’t got time to go through this post- please edit it as you read through….that’s the beauty of facebook- thank goodness, it’s not some academic journal!