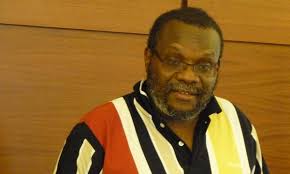 Of Mr. Macharia Gaitho history shall chronicle on his epitaph, ”here sleeps a man who was consistently inconsistent”. Proverbially, Mr. Gaitho wants to have his cake and eat it.

That’s because heÂ set out to be propagate the same. In one of theÂ ChineseÂ mythologies, the character yin yang presents to contrasting personalities: evil and good. I do not know what Mr. Gaitho’s motivations are; but I do see aÂ man attempting to balance the absurdities which his State houseÂ media breakfast visited on newsrooms a year ago.

Daily Nation, which Gaitho is a senior editor, runs an opinion editorial titled Â “Is there Western conspiracy to end Jubilee rule before its five-year term?”.

In it, the newspaper conjures up an image of resources laden virgin Kenya really wanted by the Americans. A Kenya slipping away from the West and a Kenya at the precipice of ‘opposition excesses’ and ‘university students vigilantism’.

In this Kenya, Gaitho’s reporters constructs Â half-baked innuendos meant Â to ‘mobilize the faithful (jubilee supporters) against external enemies’ including ‘communities sympathetic to terrorism’ and ‘a man in Boston’. As you read along, assuming you gather the courage to do so, you realize everyone in Kenya not dancing the Tom Tom beats of theÂ Jubilee Alliance drums is in a grand ‘conspiracy’ with the West to ‘topple’, or, end, the Jubilee rule.

Is the debate over about pluralism in Kenya? Are all voices, needed for the progress of a society that aspires to be Â democratic and prosperous, found in the officialdom of the Jubilee Alliance? Is ours a benevolent dictatorship or a thriving democracy?

The fragmentation of the Kenyan society depicts , in part, a schism in the very basics of journalism. In theory, the media sets the agenda, informs, educates, entertains and transmits culture. For the advancement of democracy and rule of man, the media, if independent and professional, ‘exposes’ the failures and fallacies in the facts and figures of all that governments do.

By consistently blamingÂ the West, the opposition and, now, university students of some nefarious ploy to topple the Jubilee Alliance, even without any iota of evidence, the media of Gaitho and others have set us in a one way trip to hell.

Gaitho’s media does not see why university students are rioting. May be, he left the university before the ‘boom’ vaults were depleted. He left, may be, when assignments were still being handwritten and all that the students needed were pens, papers and a good brain. He left, may be, when university students were still being served boiled or scrambled eggs by the government. This man, it seems, left the university before the invasion of cockroaches and bedbugs and the exit of professors from undergraduate lecture halls to post-graduate classes and, or, to the commercial world.

So they write, that a professor things that there isÂ aÂ connection between the university riots and the advisories [for those visiting Kenya] and then the assertion by the Opposition that Jubilee is failing.

To claim that university students are protesting because the Jubilee Alliance is showing the West world the regime’s middle finger Â is to live in utopia. It takes extreme courage to do so, yet a ‘respected’ Daily Nation, in, Is there Western Conspiracy to end Jubilee rule? did just that!

Yet, writing a day after this incredulous journalistic yellowism, Gaitho disses online blogs as the the purveyors of rouble-rousing propaganda.

The Jubilee Alliance propaganda has a full bungalowÂ in Nation Media Group. It is in front of the editorial swivel chairsÂ Â of Mr. Gaitho that we’ve seen a consistent, intentional and well-orchestrated attempts to sanitize some of the macabre policy failuresÂ of the Jubilee Alliance, by blaming the opposition, or students, or the West but not the regime itself.

On the pages of Gaitho’s paper, including his own column, we’ve seen the massive magnificent castles built using blocks of conspiracies and counter-conspiracies, of all those ‘enemies’ of the ‘nationalistic’ Jubilee government.

In fact, if you were to ask self-respecting online political bloggers, they’ll tell you no blog sensationalises, bastardizes and trivializes politics of Kenya more than those of the so called ‘mainstream media’.

Of course, Gaitho conveniently avoids stating openly this fact. But facts are stubborn things. Facts will point to Â Is there Western conspiracy to end Jubilee rule before its five-year termÂ as the lowliest dishwater that a self-respecting media could ever do. But that’s NMG for you.

He labours to warn of an ’emerging’ Jubilee propaganda by stating, affirmatively, the breadth and depth of the propaganda. In his piece, Gaitho spends his juiciest paragraphs, over half of the write-up, discussing, like his reporters did, the western ploy to overthrow the alliance.

Just when he’s fed you with the same conspiracy rubbish of the Jubilee Alliance in Daily Nation, he then tells you, belatedly, that this ‘asinine narrative spun by the jubilee propaganda mill’ is “scary stuff”.

Interestingly, Gaitho does not say anything about the ‘truth’, or what in media school we were told is the ‘objective truth’ – the journalist’s daily hunt – in all these. You finish off reading Gaitho very very bewildered.