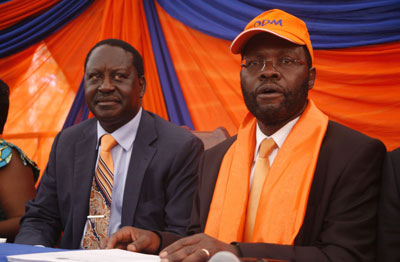 The clock is ticking towards ODM party elections slated for 28th February, 2014. It is billed as the most critical party elections that will undeniably decide the future of the party as it embarks on a journey many party members refer to as â€œrebranding and rejuvenating the party.â€

Mobilization of delegates has taken a tribal lane, boardroom deals, threats and counter threats have emerged from different quarters. However, the post that has elicited controversy is the Secretary General. This is the most strategic post after that of the party leader. The office bearer has the key to party success or failure.

Recently, a group of Luo MPs held a secret meeting to strategize on the upcoming party elections. Apparently, they came out of the meeting guns blazing demanding that they must be â€œgivenâ€ the secretary generalâ€™s post. One of the MPs â€“ Hon. Augostinho Neto â€“ was quoted saying â€œthe head and the heart must go togetherâ€, referring to the Party Leader and the Secretary General.

For Netoâ€™s twisted logic, the party leader and secretary general can only work in harmony if both are from the same tribe and in this case, the Luo. Methink this is nonsense, outright lie and barbaric sentiment.

The current holder of the position â€“ Prof. Anyangâ€™ Nyongâ€™o â€“ is a Luo who happens to bear the brunt of blame for the partyâ€™s failure. Interestingly, Nyongo bowed out of the race due to cowardice. I know why these Luo MPs want to cling to this post and I will tell you why.

Over the years, these conmen have used this powerful post to seek political relevance in Nyanza state, secure their uncertain political future and protect their political interests. Through this post, they have championed corruption, impunity and politics of exclusion in that region. They have made it practically impossible for anyone to benefit from the party unless your bank account favors you.

We know of how nomination certificates were sold to the highest bidders and their cronies. There has always been blatant and deliberate attempt by this club of â€œRailaâ€™s hungers onâ€ to lock out potential competitors. The secretary general; who happens to be their ring leader, has always abused his powers to grant his allies political immunity â€“ at a fee.

Most of them grapple with the reality that once an â€œoutsiderâ€ gets the position, their political lifeline will be at stake. They have a genuine but imprudent worry which must be blocked at all cost. At this point, I need to remind you of Niccolo Machiaveliâ€™s quote; â€œMen rise from one ambition to another: first they seek to secure themselves against attack, and then they attack others.â€

In justifying his theory of â€œthe head and the heart must go togetherâ€, Hon. Neto referred us to some parties; Wiper and Ford-Kenya. Interestingly, he never mentioned ODMâ€™s arch rivals TNA. This was a deliberate attempt to justify an illegality. The Mheshimiwa must be told that ODM is a national party which must only be compared to ANC of South Africa and the Democratic party in USA.

The process of rejuvenating the party starts with the coming party elections. The peopleâ€™s mood must be clearly read and properly interpreted. Any damage caused in the upcoming elections will be perilous and irreparable. ODM enemies are keenly watching the activities of the party. They will employ all manner of schemes and dirty tricks in order to infiltrate the party with the aim of bringing it down to its knees.

A positive change in the party is a slap on their hate filled faces. They want the party to give its supporters what their supporters donâ€™t deserve. That way, the Jubilee mandarins would have succeeded in their attempt to â€œburnâ€ the party down after several desperate and shameful attempts to coerce the RT. Hon. Raila Odinga to retire from politics.

Luo Nyanza has handled Hon. Raila Odinga for some time now. Itâ€™s logical for a change of guard to take place. What we need is a charismatic, innovative, vibrant and trusted â€œoutsiderâ€ to handle Jakom in the position of secretary general. For the sake of the future, the party doesnâ€™t need desperate sycophants or a political despot who will use the position to advance his/her own selfish political interests.

This man or woman must have won public trust, tried and tested. He/she mustnâ€™t be under the payroll or direction of any political desperados or enemy. The position must also not be used as â€œlab testâ€ for someoneâ€™s managerial skills. Nyanza politics must be reformed and the best person to do that is an â€œoutsiderâ€ SG.

Look at the contestants for this post mainly those from the Nyanza region. Any guarantee that they wonâ€™t carry on perpetuating impunity and Nyongoâ€™s style of leadership is highly in qualm. The blowing wind of change is precisely giving them nightmares. They are in an anxious hopeless effort to hang on anything and everything that they think can save their skin.

Jakom, there are so many things at stake here. The wind of change is blowing and it canâ€™t be ignored. There are many able young men and women out there who are ready to serve the party with great loyalty. These men and women want a chance to handle you and the party in a different way so as to deliver victory.

It is therefore important for you to ignore the reckless noise from those â€œhangers onâ€ from Luo Nyanza who want you to taint your image and that of the party by lending one of their club member support. I ask you to keep your hand clean and ignore these pundits.

For the greater Luo Nyanza, your eyes are on the price and no matter who delivers the â€œcrownâ€ to the king; you must keep your hands safe. Remember, â€œThere is nothing more difficult to take in hand, more perilous to conduct, or more uncertain in its success, than to take the lead in the introduction new order of thingsâ€. Niccolo Machiaveli.

Jim Bonnie is a prolific writer on governance and socio-political issues affecting Kenya, Africa and the world. He has a lot of interest in politics and history.