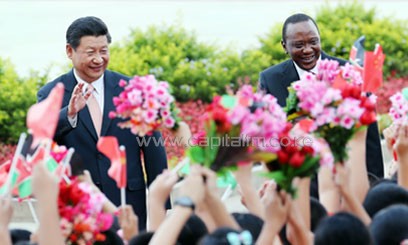 Just of recent before and when Mr Obama paid a visit in Tanzania, Kenyan frenzy media insinuated if not engineered the “Turning East” plot, policies from nowhere may be from Thika if not Gikombo then Mt Kenya. Non researched, Uhuruto government; slippery on every tree that tries to climb blatantly gulped on them to cover their shamed faces from being ignored by Obama, immediately announced a trip to Russia and China only to end up being not true since the representatives of those two countries openly rebuked any arrangement of those two official visits by Uhuru. What a public stunt from Jubilee coalition propaganda?

As if the signs of unwanted by international community were not seen or trying so hard to fit in Tanzania’s shining star or letâ€™s say testing waters of Tanzania diplomatic prowess of early 1960s, 70s to 80s. The Jubilee government forged an informal quick trip (though announced official) to these two countries just to demonstrate that Kenya is official leaning East on policies probably trying to imitate the famous Nyerere’s Mao visit when the country turned his back away from the UK and West allies.

Unfortunately, things are not the same and their plot is crumbling fast, uncharacteristically of state official visit and unannounced prior, Uhuru ended up visiting the Moscow’s IAAF games posing for a picture with Kenyans athletes and offering a dinner with them while buying time to know whether he will have a chance to meet Putin for what was meant to be a state’s official visit.

And at last disgraced he ended up having a meeting with local business persons from a local business council! I call it local cause those mega rich Russian billionaires were not in attendance and out of the fact the reception of the CORD’s Governors’ trip to the US was more galant than Uhuru’s to question who is superior and in charge in Kenya to be accorded a treatment reserved for a head of state at foreign land . What a snub from a president a country that is known to brag of her prominence at World stage?

To make matters worse the Kenyan media is trying so hard to hide the truth of what is happening to their president on his tour branded “Turning East” of course only till when “East turned West” on Kenya proving irrelevance of this stubbornly bragging nation when it comes to seeking glorification. What a shame… Bwahahaahahhhh

At least Xi Jinping made a breakthroughÂ  for Uhuru and his entourage and one can only hope the treatment will be better! So far Mr. Uhuru had been snubbed at home (By Obama) and away (By Putin). A record set by any African leader so far because even Mugabe is very smart to know the no go zones for his nose! What a diplomatic mess by a seating Government that proves to be in total shambles. As a challenge ahead, the GOK should at least try to smell the coffee to know what is out there in the International coffers for them to gather before the title “Mr. snubbed” becomes catchy on Uhuru’s Presidency.