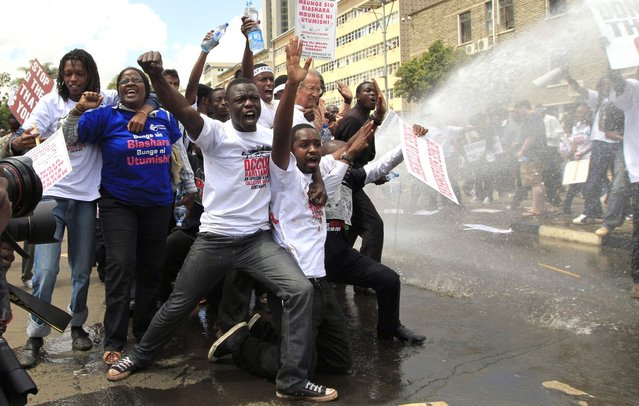 This week, Kenya will mark the first anniversary of the controversial elections that brought the Jubilee government into power. To many, those elections, and the manner in which the country’s affairs have been managed since, left a bitter taste in the mouth, and were a betrayal of the 2010 constitution and the more than two-decade long fight for political and economic justice.

On the other side of the world, in the Ukraine, a thieving tyrant has just been been deposed and a mobilization for war is under way. The events happening thousands of kilometers away in a part of the world few of us know about and even fewer have actually visited, carry important consequences and lessons for us here.

A very brief outline of events: Ukraine has seen off and on political crises and revolutions for close to a decade with the main sticking point being whether it will remain in Russia’s sphere of influence or move westward.The country is ethnically divided and split down the middle on the issue. The current crisis was sparked by President Viktor Yanukovich’s decision to abandon a trade agreement with the EU, and seek closer ties with Moscow. This precipitated three months of demonstrations in the capital, draconian anti-protest laws, occupation of government buildings and street clashes in which over a hundred demonstrators died. At the end of it all, Yanukovich had been stripped of the Presidency and had fled to Russian, a new pro-Western government had been formed and Russian troops had invaded the province of Crimea amid talk of, and mobilization for, war.

Predictably, the West has reacted with howls of outrage at Moscow’s actions, cancelled a meeting with Moscow and done little else. If it came to a fight with Russia, it is abundantly clear that the Ukraine would be on its own. There may be talk of economic sanctions, perhaps asset freezes and visa bans, but the fact is Russia will probably escape with little more than a pat of the hand courtesy of it’s nukes and the West’s hypocritical “morality of the hedge-fund.”

What does this mean for us? The main lesson that our elites will undoubtedly draw is one of Western hypocrisy and weakness. This will reinforce the idea that despite its rhetoric, the West is not much more than a paper tiger and, when push comes to shove, will quickly abandon hifalutin principles and allies. Above all, realpolitik rules.

It has not been a good year for Western prestige, having been forced to swallow its words on the consequences of Kenyans electing indictees of the International Criminal Court to the highest office in the land as well as having to back down on the issue of presidential impunity. A crackdown on homosexual rights across the continent is also being painted as a thumbing of the nose to the Occidentals.

On the other hand, the Easterners, particularly the Russians and the Chinese, are increasingly being seen as viable patrons, powerful, flush with cash, if not exactly moneyed populations, and who will not ask too many uncomfortable questions about the uses to which their money is actually put. Since no one really believes in communism anymore, least of all the self proclaimed communists, there’s little danger of ideology intruding into relations.

For the rest of us, a resurgence of East-West rivalry will also mean that they all once again needs allies. As was the case with the war on terrorism, countries that were on the brink of becoming irrelevant are once again becoming “strategic.” That was the designation craved by elites but that meant doom for many African countries during the Cold War, that turned them into arenas of perpetual misery and conflict as unaccountable elites essentially were let loose to loot, murder and maim in the service of either side. Words like transparency and accountability and democracy were emptied of all meaning. Today’s do-gooder West was not only providing safe havens for ill-gotten wealth but financing coups against legitimately elected governments, propping up genocidal dictatorships and kleptocracies.

Thus the stage is set for a return to the heady days of independence when African rulers faced few international constraints in their dealings with their populations. In Kenya, we have already seen moves towards consolidation of state power and silencing of dissent. Laws clamping down on media independence and threatening the viability of civil society organisations have already been mooted and the former actually passed. Government propaganda rules the airwaves, courts are routinely ignored and corruption and the theft of public resources are once again a way of life.

As in the 60s, we are today urged to sing the praises of our government and its leaders; to stay silent; to keep the rot hidden; that dissent is somehow unpatriotic; to forget how the dreams of “development” and social justice floundered on the rocks of sycophancy and a wilful ignorance. We are being lulled into a false sense of security.

Yet,, as we cast our eyes at Ukraine, it is important we realize that no one will come riding to our rescue. Like them, we will ultimately be alone in the fight against the oppressions and predations of the big brother in State House. And, therefore, we need to mobilize. We need to form alliances and create platforms and forums where the dangers can be articulated to the society.

Like the Ukraine, Kenya has seen a political revolution betrayed by greedy elites. If we do not stand up to them today, if we do not insist on accountability, then their promises of “development” tomorrow will be so much ash in our mouths. We’ve rid ourselves of a thieving tyrant once before and we can do it again. The question we really need to ask ourselves is whether we are truly ready to play our part in demanding that Kenya is run for the benefit of all Kenyans, not just for those who can afford to steal elections.