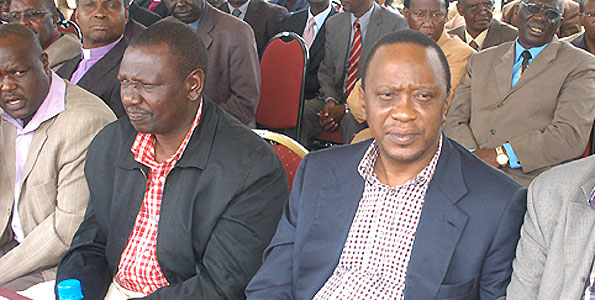 “The solidarity exhibited between the Kikuyu and Kalenjin during the last elections, which propelled Uhuru Kenyatta to the presidency, and William Ruto to the deputy presidency should behove historians and political commentators to relook at the real cause of the 2007/2008 post- election violence”. – Lee Njiru.

This is my take:

Reading through Lee’s opinion piece, he attempts to deconstruct the 2007 post poll violence as a consequence of the first Kibaki regime systemic removal of Kalenjins from the government, including the military, after the 2002 elections.

Interestingly, the use of ‘kibaki regime’, not ‘kikuyus’, interchangeably with ‘kalenjins’ continue to hide the fact that the regime ‘side’ which dealt brutally with Kalenjins was wholly Mt. Kenya in ideology and plot.

Conveniently, a decade of deliberate distortion has led us to the shameless denial of the fact that while 2002 was a victory of all tribes, except Kalenjins in a larger sense, the spoils, and their attendant excesses, were quickly grabbed by the Kikuyu.

Njiru gets one thing right though: that the 2007 violence, as perpetrated by Kalenjins, wasn’t about Raila’s stolen victory. It was about the post-2002 purge of Kalenjins after Moi.

That purge, Njiru notes, was epitomised when the then Head of the Civil Service Dr. Sally Kosgei (whom Raila would later dust and restore to glory) cried bitterly of her treatment as early as the day Kibaki was sworn in.

However, Njiru, in his attempt to blame the “first” Kibaki regime,ironically, removes any blame from Kibaki. Why this falsification, always?

Then, Njiru claims Kalenjins were victims. Of course they were, but they were also villains. The Rainbow regime was to ‘correct’ 24 years of Kamatusa!

There was no sin in ‘nationalising’ the government and the armed forces from the then Kalenjin stranglehold.

And there was no need to send all Kalenjins home. It was wrong!

For every Kalenjin sacked there was a Kikuyu appointed. Two examples; when then NSIS chief Wilson Boinett was fired after the 2005 referendum, appointed in his place was one Michael Gichangi. When Dr. Sally Kosgey left the helm of Public service, that powerful slot was taken up by Mt. Kenya. . .it has never left the mountains. Earlier, Joseph Kibwana, who replaced Daudi Tonje, was himself replaced by Jeremiah Kiangi.

In fact, the expulsion of Kalenjins increased exponentially after the 2005 referendum. Between 2002-05, the presence of the Liberal Democratic Movement [LDP] ‘slowed’ down this trend.

For all the Kalenjin rubbish of betrayals and claims that Raila Odinga is a traitor, by 2007, history will record that Raila re-established the place of the Kalenjin in national politics in ways that shocked even the Luos.

Literally, all those Moi era kalenjin politicians who had been ‘defeated’ in 2007 got a new lease by gravitating around Odinga. How could they have not ‘noticed’ this Uhuru? Remember, in all his dalliance with the Kalenjin nation, the Kalenjins have NEVER accused Raila of ‘witch-hunting’ and sackings of its professionals.

The 2007 violence, however much it is being sanitised to have been a ‘violence to put Raila to power’, was not about Raila. Conveniently, Kalenjins used it to cover up their own ‘historical issues’ to settle with the Kikuyu in particular, and, others in general.

The thing with politics of ‘deals’ is that it never organically solves the history of usurpations that one community feels about the other.

Today, a national newspaper reported on new leaflets being directed to the Kikuyu community to leave Rift Valley.

These leaflets have been part of the Kikuyu-Kalenjin socio-political settlement in the Rift Valley way before 2007. From 1992 onwards, the cyclic violence against the Kikuyu by the Kalenjins isn’t academic.

So, to continue with the usual dishwater that the 2007 post-poll violence was instigated by Raila for Raila is to take your own intelligence for granted. And, even more egregious, is to believe that 2007 was an ‘isolated’ event.

The ‘solidarity’ in Lee’s opening paragraph between Kalenjins and Kikuyus in 2013 indeed dumbfounded many. However, it succeeded in part because Raila didn’t aggressively countered it, and, because the ICC ‘Siamesed’ the two communities.

This though you can take to the bank: there ‘is’ nothing like ‘solidarity’ among these two groups. Their alliance has a sell-by date and their hour of reckoning is nigh.