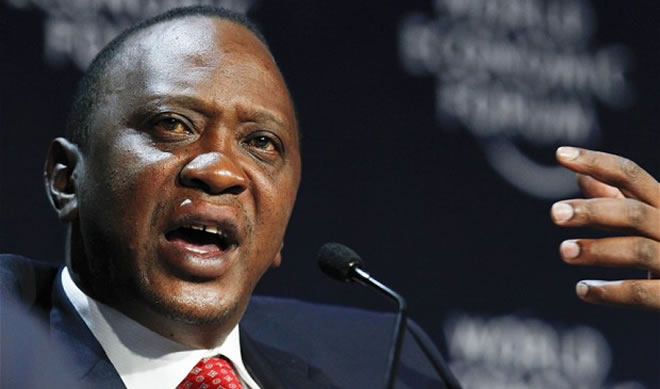 By P W
President Kenyatta has been exposed as having engaged in double speak even as more than 90 civilians and a few security officers losts their lives to marauding attackers in Mpeketoni and Hindi. This is an embarrassment to all Kenyans.

Such careless talk was was orchestrated by Jubilee government most likely to score political points after the political pressure became too much to bear following the #BabaWhileYouAway campaigns! IN parliament, Duale led parliament in condemning those who want to attain leadership using the blood of Kenyans.

Apart from MP Mr Julius Kariuki Ndegwa of the Kenya National Congress (KNC), all the other victims, eyewitnesses, and local Lamu residents agree on one thing> It was Al-Shabaab who even chillingly promised to come back, and come back they did!

Dennis Itumbi now introduces another incredulous spin. That even Al-Shabaab was likely to have been hired by local political networks to commit such heinous acts.

Such reckless talk is what creates problems in the grassroots and makes Kenya a global laughing stock. You can imagine Obama blaming GOP networks for Boston Marathon bombings, then coming to Kenya and telling KBC it was actually militants. Would he last a day longer in White House?

If indeed Kenya government has proof of involvement of local political networks in MPeketoni and Hindi attacks, how come no arrests and no one charged in courts?

Itumbi should tell the country that other than Governor Issa Timamy who is yet to be charged, which are these other political networks involved? In the clip, the Deputy President clearly says some people who lost elections and want to make the country ungovernable were responsible, while Lamu west MP Julius Ndegwa specifically mentioned Cord.

In parliament meanwhile Duale was pointing an accusing finger at Raila, why then cant the state arrest all the suspects including Raila and Cord politicians? Mr. Itumbi, my only worry is either you, the state or someone else is mean with the truth and resorted to get political capital from the Lamu attacks by linking political networks, who appear to be so complicated that they can not be unearthed. Was this was perhaps done to create a ‘siege’ mentality among Jubilee supporters?

Here is what the president says through his director of Digital Media Denis Itumbi
The President did not contradict himself on the issue of Lamu attacks. He was clear that local political networks masterminded the attacks, and as such they were not AlShabaab attacks.

The President and in deed anyone else who follows events beyond the news knows that AlShabaab is a rental terror group.

The political masterminds hired AlShabaab for the attacks.

But of course it is always easier to believe the simpler story. It does not change the facts

One day, because of article 34 of the Constitution, the entire and real story of Lamu will be told and published.

Unfortunately, it is all I can say for now