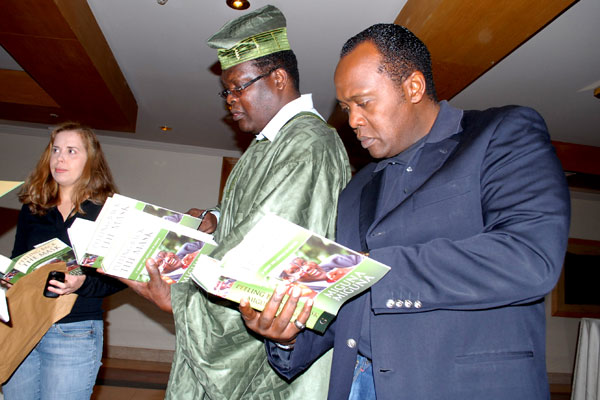 The irony is that Jeff Koinange who interviewed Miguna Miguna SEVERAL TIMES over the same story, same sound bites, same script during the prime of Peeling Back the Mask is having his book serialised by The Star, Kenya and no one is bothered to comment.

I have been skimming through the comments section to get the gist of the book (which my friend Shem Beverton would deridingly refer to as a ‘ludicrous pamphlet’) to no avail. There are no comments.

First, for a ‘journalist’ of Jeff’s pedigree to have his book on the Star and not the front pages of Daily Nation or Standard Newspapers is both a professional and intellectual indictment worse than what his cousin is escaping from at the ICC.

As a countryman, I have one advise for him. It all depends on what he wanted to achieve. However, everyone writes to communicate with others, meaning, Jeff thought he had a story worth sharing.

Who should be the audience of Jeff’s book? I do not know but if you are like myself whose grandpa did not grab anyone’s land or has no close connection with colonial homegauards and, or, Indian coolies, Jeff’s book is the least to get inspiration from.

“Through my African Eyes” is the title of Jeff’s book, or booklet. Its launch reminds me of the Mitumba launch by his other nephew at the exclusive millionaires hotel Villa Rosa Kempenski not long ago.

Trying to search anything ‘African’ in Jeff Koinange’s eyes is like attempting to locate the parcels of lands grabbed by Jomo Kenyatta. In real sense such lands exist. But, really, or, as the Bible writer aptly interjects: ‘assuredly, assuredly I say unto you, Old Jomo did not grab any land’.

Who should be the audience of Jeff’s book? Who has read it? Lessons?

I hear he is an award winning journalist. Also, he also holds some head of sate commendation, a Moran of the Burning Spear? Imagine.

So why is Jeff’s book launch and serialization such a common news event? Simple. Jeff has no story. If he does, it is an underwhelming story.

I am frustrated. I love reading. I love thinking. But Jeff’s book can’t cure my frustrations. I can’t read it. I can’t love it.

Tarry. Don’t give me that ‘second name betrays me look’. I have read Mejja Mwangi. I remain a great fan of Binyavanga Wainaina. But Jeff?

The only time Jeff’s book can be of ‘life value’ to me is say I get abducted by Kiambu diaspora at Sabina Joy and I really must take all energy from my loins.

Some men don’t have stories so they really should stick to telling other men’s stories. Oxymoronic? May be.

If Jeff wants his book to ‘go viral’, maybe he should call on the Bench a guest list of David Matsanga and Ngunjiri Wambugu to blame the pamphlet on CORD. Innovatively, he can send a copy to those great friends at Ghafla to publish it as a preamble to the latest mugshot of Verah Sidika’s ass or Corazon Kwamboka’s boobs.

Having informed you on what to expect from Jeff’s book – nothing – it is now my pleasure to invite you to buy it and read it.

Through my African Eyes.