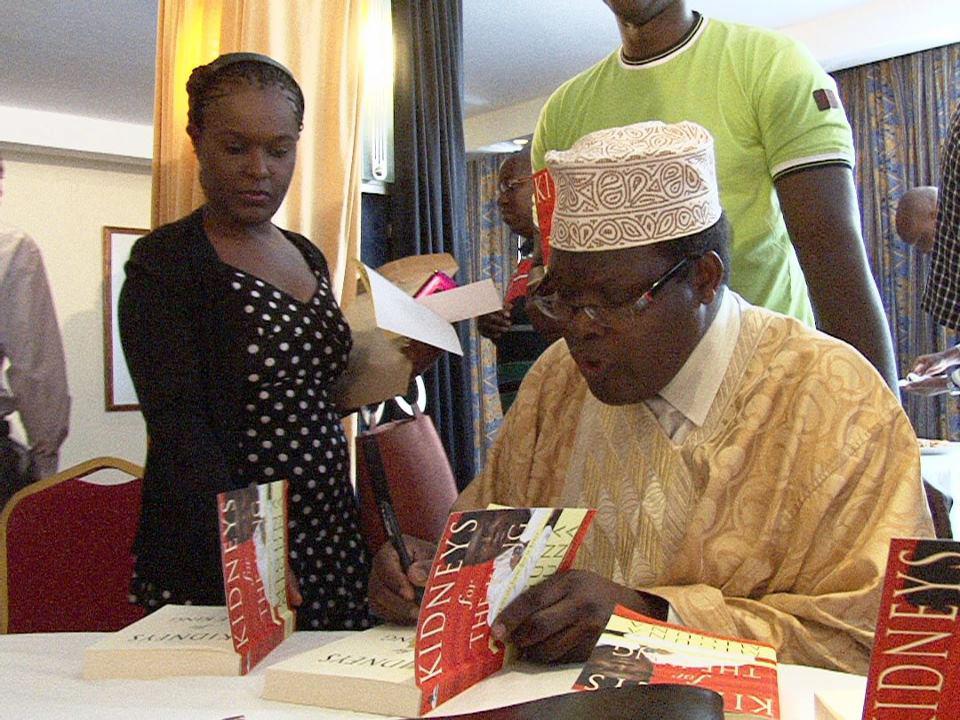 Miguna Miguna launched his second book on Saturday in Nairobi, the book is titled Kidneys for the King; deforming status quo. The launch was low key despite spin by bloggers trying to capitalize on the occasion to spread propaganda.

Like his first â€œvolcanicâ€ collection of tales small and big that was anything but and flopped as we predicted, this one too shall be a flop for several reasons.

To begin with, Miguna lost his credibility as a truth teller when he promised so much ahead of the publication of his first book only to deliver nothing but a hatchet job on Raila that did no damage to the man even close to what Miguna had hoped.

There is no doubt in any objective personâ€™s mind that the first book Miguna wrote was a vindictive, seething at the mouth shouting of things that were either not true or simply exaggerated with the sole intention to damage Raila while trying to prop up Miguna as the savior of the world, neither of which succeeded.

This attempt did not succeed because Kenyans, save for those who hate or canâ€™t stand Raila are a fair people and know a hatchet job when one is delivered and dismiss accordingly as was in this case.

Not much is remembered about this book other than perhaps that Miguna is bald.

It was noted by astute observers that Miguna could not have possibly had any secrets of the government he could reveal, given his relatively junior position he held as advisor to Prime Minister Raila Odinga.

The other reason those predicting Migunaâ€™s failure to deliver on his lofty promise in the first book and now proven right was based on the fact that Miguna basically told us all about what was in the book before it was released, leaving nothing to look forward to in reading the book.

Miguna put the final nail on the coffin when he shamelessly peddled sex stories in the book that have no place in any serious book or narrative.

This writer recalls talking to someone not a supporter of Raila at the time who told him he was not interested in reading the book after what he heard Miguna said in it about these sex stories. This is a view many held who never bothered to buy or read the book other than those prone to salacious and made up slanderous gossip.

For these and many other reasons, not the least of which was the arrogant, chest-thumbing manner in which Miguna conducted himself during the bookâ€™s launch, Migunaâ€™s first book was a flop as predicted.

Again, as noted above, this second book, too shall fail for some of the same reasons the first one failed.

For example, itâ€™s obvious Miguna is still a man with an ax to grind against Raila; he thinks of nothing and dreams of nothing better than to damage Raila for having unceremoniously terminated him.

It should be remembered, however, that even as Miguna was trashing Raila and accusing him of all manner of corruption and incompetence, Miguna actually agreed to return to work for the same man when Raila was prevailed by others to do so.

That act alone shattered any credibility Miguna may have had in â€œpeeling backâ€ the purported mask of Raila.

As noted at the time, the only mask Miguna ended up peeling was his own as a vindictive man who thought too highly of himself than he is or ever will be.

Miguna once again places himself at the highest level of importance he is not in his second book by claiming in the book that he and only he has the evidence to have Raila charged at the Hague but in his warped view, the ICC is not interested in this evidence, which is such a stretch and self-elevation to high importance only Miguna can muster.

It also begs the question; if Miguna is this important a witness and has had this evidence, why did he hold on to it until he was unceremoniously shown the door to bring it up?

Does this not tell you everything you need to know about this man that he is either a big liar or one quite ready and willing to say or do anything so long as he believes it would damage Raila?

The answers are obvious and more so the reason no objective person can ever take Miguna seriously in anything he says about these things, especially as they relate to Railaâ€”the man Miguna is trying to damage but will not succeed.

Besides once again elevating himself to high importance, Miguna also suffers the same credibility problem as in the publication of his first book on grounds he purports to authoritatively speak of things he really knows very little about or has no basis to know more than any average person observing these things.

It is reported in the news that Miguna intends to portray Raila as not being the reformist everyone knows him to be.

The problem is, everyone knows Raila to be the reformist he is and there is nothing only Miguna is privy to that changes that fact and this is true even considering Miguna served as a junior staff at the PMâ€™s office.

There are hundreds of others with access to the same information and access Miguna had but none of them can claim as Miguna has that Raila is not the reformer he is based on that knowledge, access or information.

None because itâ€™s a fact and truth that Raila is a proven reformer unlike any of those vying for the presidency the only thing Miguna can attempt to do, is to smear and tell tales in the hopes they can damage Railaâ€™s image as a reformer.

Miguna then tries to depict Raila as having ill-gotten his wealth. This is laughable besides not being true.

If there is anyone in Kenya who has legitimately gained his wealth and not by looting, itâ€™s Raila Odinga and this is not disputed even among some of his critics.

Finally, but not least, Miguna claims in his new hatchet book that Raila never graduated from intermediate school and that therefore his academic qualification, including his earning his degree as an engineer is somewhat suspect.

The only thing to be said about this nonsensical assertion other than itâ€™s shameless one can go down that far in another manâ€™s schooling history going more than 50 years, is that Raila is an engineer by profession and his academic qualifications meet the constitutionally mandated criteria for one to run for president and that is, he graduated with a degree from a recognized university.

To sum it up, Migunaâ€™s second book is much ado about nothing and as in the first book, it would be fodder only for those who for whatever reason donâ€™t like Raila therefore a non-factor politically as these people would not have voted for Raila anyway.

Those who support Raila/Cord will continue to do so regardless of what fiction Miguna tells in his so-called book; those very few undecided and even some of those who donâ€™t support Raila/Cord will chose to support Raila because they know this man has suffered a lot all for the sake of our country and these efforts to damage him with these useless books serve no purpose other than the selfish, vindictive quest by the authorâ€“if you can call him that; more like a gossip narrator and unfounded allegation peddler than an author.

That being said, let me take this time to encourage Kenyans with no ax to grind with any information about our leaders and the functioning of our government to share freely for the people are empowered if the proper information is shared and not bar gossip, innuendos and other equally unreliable tales this Miguna seems to specialize in notwithstanding the title of these collection of tales small and big.