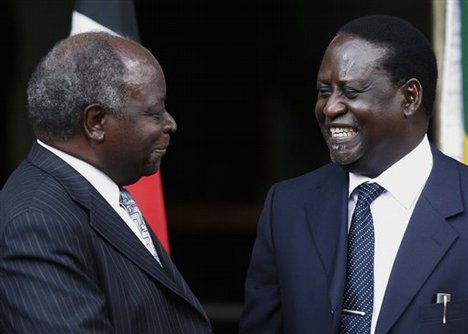 Ever since the 2002 Kibaki Tosha declaration, Railaâ€™s rise and rise and riseâ€¦..to political prominence began, by 2005 referendum only Kibaki Â could rival his ratings. He had curved himself a new niche as not just the â€œtop dawgâ€ but also the master tactician of Kenyaâ€™s political stable.

The pre-election Memorandum of Understanding which though not fully honored by the NAK wing of the NARC Coalition Government, was still well written in the hearts and minds of Kenyans.

Actually had it not been for RAOâ€™s declaration of Kibaki Tosha, Kibaki would have gone down into the dustbins of political history as this man who retreated to his Othaya home after he tried to be president 3 times unsuccessfully- something akin to The Ron Paul or Ross Perot of Kenyaâ€™s political scene.

Raila in just 2 words, made history and changed Kibakiâ€™s destiny and saved him from the dustbins of political oblivion.

I wish someone would do that to me- hand me the presidency on a silver platter, by putting on hold his ambitions. Then again in 2008, give up his hard-won presidency to settle for a power-sharing arrangement with me! I would never betray him!

Even Kings and Queens die on the throne rather than lay the reins on the laps of their own begotten children. But President Kibaki is not a President Rashid Wanjala. He is a Thank less man.

If a man puts his own ambitions aside for you and says Kibaki Tosha, then itâ€™s only human and prudent that you respond in kind and support their ambitions in return. That is what gentlemen do.

That is what Ronald Reagan did in return to George Bush who himself was a candidate in the battle for The Republican ticket in the 1980 presidential election.

This goes true also for Al Gore 2000 Campaign which- though he tried to distance himself from President Clinton due to â€œLewinsky baggageâ€- Clinton never wavered in his support of his support for Gore 2000 candidature.

Kantian moral philosophy teaches us to have a set of principles around which a rational being should operate and that regardless of how politically expedient it is, we should abide by those principles.

I wonder if Kibaki has read Kantâ€™s Groundwork of the Metaphysics of Morals. Most if not all of the DP days Muthaiga Club patrons have been rewarded with appointments.

However, they never delivered in his two time attempt at the presidency. Infact some to them like the late Njenga Karume, May God rest his soul in eternal peace, dumped him for Moiâ€™s 2002 Uhuru project.

Yet Raila did it in two words, and dedicated his financial resources and international networks and exposure, to install Kibaki into the throne. But Ngâ€™o! Kibaki has never even said thank you in a public address.

Every appointment that Raila has obtained in his political career was hard earned. He got it by merit and deservedly so! In all his political arrangement itâ€™s been about domination by the numbers by attracting the masses to any political arrangement that he has engaged in. Go back the last 20 yrs, and you will find that every political project that he has put his hand on has prospered. That takes a gift from God, and not from man!

Because if Kibaki read Kantâ€™s treatise, he would understand that people like RAO, who came to his rescue in his hour of need and incapacitation, should not be viewed as a means to the end, but as an end in themselves.

However God works in mysterious ways and Kibakiâ€™s thanklessness built Raila into a formidable force. It helped him broaden his support base to being the undisputed leader of the Reformist Movement in Kenya.

People began asking themselves, who is this man, who gives up his own presidential ambitions for another, when he stands a very good chance at winning the presidency? Citizens are very intelligent people; they can tell genuine people who put the interest of the nation before self.

They can tell people who conned themselves into the presidency, from those who mean well for the nation. Because people, who had for 2 elections rejected a leader and were about to reject him for a 3rd time in a row, were assured that their interests and aspirations that were embodied in Raila were addressed in the MOU that Kibaki himself had signed on to.

Only Mandela, Jaramogi and maybe Nyerere have showed this level of magnanimity and generosity by bequeathing an opportunity for power with the hope of accomplishing a good for their country.

However that was not the first time that RAO had demonstrated valor when confronted by a suffering of a people that he felt he had a calling to lead.

Despite losing out on his family stability during his teens and 20s as his father fought for independence, Raila still went ahead to dedicate his 20s, 30s and 40s to the trenches of the liberation struggle- when he earned himself 8 years of detention, gaining a place in history as Kenyaâ€™sÂ  longest detained man.

Add to the 8 years of detention, Â the anxiety and emotional trauma that,(like the family of a soldier fighting Alshabaab in Kismayu) his wife, and little children had to endure- unsure of whether hubbie and daddy will come backÂ  home safe and alive.

Infact this is corroborated by the widely read American Huffington post which describes Ida Odinga as the woman who â€œfor more than two decadesâ€, she â€œcame to be known as the face of defiance to injustices and the intolerance that was witnessed during the one party state regime and came to be known as the longest political widowâ€. Â http://www.huffingtonpost.com/lady-ida-odinga

As his cohorts (age mates) hang out in clubs, and dancehalls, the young Raila found it honorable to shoulder the burden of a nation- which was to take down the hydra-headed single party monster because he is an optimistic man, who saw light, even where like in a tunnel, no-one else saw hope.

All this time, Kibaki was comfortable in government, being celebrated as one of the youngest Ministers in Kenyattaâ€™s government- the era when the largest swathes of land was grabbed in Kenyaâ€™s history. To him Uhuru had been won. That the mzungu had gone -thatâ€™s all that mattered.

In Kibakiâ€™s distorted philosophical thought, the single party dictatorship was like a Mugumo tree, that couldnâ€™t be cut with a razor blade- To him Kanu was the shrine under which â€œMwene Nyagaâ€ is worshipped- a habitat of god!

And thatâ€™s huge for a London School of Economics graduate to not have the inner conscience to tell a repressive and oppressive regime from what a progressive regime should look like.

Education is supposed to instill a conscience in us, so that we can show our people direction, when itâ€™s obvious that they are being oppressed.

History presented Kibaki of the 70s and the 80s with a Mosaic opportunity to do that- deliver Kenyans froms the yoke of bondage, but he chose not to. And that explains why Kenyans for a third time in a row, Kenyans were about to reject him, until the enigmatic and indefatigable RAO came to his rescue.

In the 70s and the 80s, Even though the nation seemed as an irredeemable de jure single party banana dictatorship Raila never gave up on the Jamhuri as a nation that could not just be reformed and transformed but also one whose economic and infrastructural development could be transformed to join the league of the Asian Tiger type of nation- Singapore, Malaysia etc.

If you listen to him articulate his vision and strategy, Raila endeavors to drive Kenyaâ€™s economy to be in the league of South Korea and Singapore which were in the same league with Kenya in the 60s.

That is why when he endorsed Kibakiâ€™s candidature in 2002, the succession game was over. Kenyans listened and overwhelmingly listened to a man they trusted to offer direction.

Kenyans have continued to be in appreciation of his selflessness; more than 60% of voters in all Provinces save for two solidly supported his NO campaign in the orange referendum almost to a man.

This same scenario repeated itself in the 2007 elections, in which Railaâ€™s ODM- both locally and globally is believed to have defeated Kibakiâ€™s PNU.

All opinion polls in the period preceding the elections showed he won. Exit polls too vindicated Railaâ€™s superiority in the 2007 elections.

Now over to my point;

Raila’s performance credentials, are self evident- locally and internationally. That explains why he was entrusted with delicate assignments mediation of the Ivory Coast disputed elections.

Locally, it is only after he had entered into a grand coalition agreement with Kibaki that major road projects had begun to move forward.

Raila is a man who follows up on his vision. We can all recall that while the Roads Minister, Raila wasted no press conference to display road designs of the bypasses, the Thika Road Super Highway, Museum Hill Round About, Mombasa-Busia-Malaba Road, Kisii- Chemosit,Â  Nakuru -Eldoret, Nairobi â€“NamangaÂ  among other projects that were very key, dear and very central to his heart.

By the time his tenure was cut short by the betrayal of the peopleâ€™s 2002 revolution following the 2005 referendum, all plans of the current road projects were in place.

During his break from government most major roads had come to a halt because most major development partners had lost trust in a government that had lost the peopleâ€™s mandate.

Itâ€™s after he re-joined the government as the Prime Minister of the Republic of Kenya that these major projects have been accomplished. Â In 2008, while negotiating for the 50% share of the cabinet positions, Raila ensured that the roads docket was in his side of the coalition, and therefore, he had the express responsibility to pick the holder of that portfolio. As such he has been the engine of infrastructural transformation that is tangibly being experienced across the country.

Internationally, he is respected as the few African political superstars whose vision and standing on weighty matters touching on the economic emancipation and social transformation of the African continent has never been in question.

Raila Odinga has always reiterated that Kenya, if he would have a free hand, and an overwhelming mandate- and which from all indicators on the ground he will- he would transform and reformÂ  Kenya into a model of what can go right in an African nation where the leadership is focused.

Raila is a frequent high level participant at the annual World Economic Forum – a club of the worldâ€™s most influential government and business leaders.Â  An engineer by training and a successful entrepreneur, he understands the importance of infrastructure in enhancing the countryâ€™s competitiveness.

The vision to transform Kenya to a logistical hub in Africa can best be realized by a Raila presidency, he understands that to drive the economic growth agenda of this country forward we must we fix infrastructure. Rapid economic growth will uplift millions of Kenyans who survive on less than a dollar a day.

Railaâ€™s would be a model, I can conclude, of how a nation can be transformed from obscurity and mediocrity to prosperity and Kenya would for the first time be on the path to unprecedented progress and economic growth.