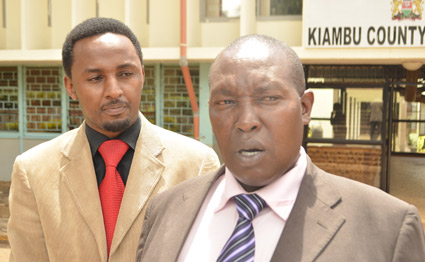 What’s wrong with some people?
By Phil Wesonga
In very distressing news, KIAMBU county assembly has rejected the appointment of Bernard Kipkemoi Ng’eno as chief officer for Transport. Although they give the flimsy claim it is because Kipkemoi is unfamiliar with local infrastructure, the true reason lies in the fact he is not a local. Even at national level Transport CS Kamau cannot claim to be familiar with infrastructure in the entire republic. Matter of fact, cabinet members deal with policy issues. Kiambu County makes us all bow down our heads in shame.

The MP for Suna East (Migori County where president was heckled ) in so-called Luo Nyanza is an indigenous Somali. He previously served as Mayor of Migori Town.

The MP for Kisumu East Constituency (where Moses Kuria is intent on holding an harambee after deeply insulting Luos) is an indigenous Indian Hon. Shakeel Shabbir. This MP was divorced by his Indian wife for marrying a Bukusu from Western Kenya.

Not to be left behind, and in total violation of pre-election pact to distribute elective seats with locals, Hon Julius Kariuki Ndegwa (a Kikuyu) of the Kenya National Congress (KNC) became the first non-indigenous MP from Lamu County when he clinched the Lamu West parliamentary seat voted in by local Bajuni community. Previously, Ndegwa was former Bahari ward councilor in Lamu County.

Not so far away in Nyali, Hon Hezron Awiti Bolo (a Luo) was elected member of parliament in a predominantly Miji-kenda and Arab region.

And in Kisii county the chief officer in charge of labour is Ms Njeri Mwangi – a Kikuyu by tribe.

In the last general elections, the people of Meru County introduced fresh and new impetus in the politics of the previously fortified Mount Kenya region. They not only elected two MPs on ODM ticket, they also rejected on of their own in Imenti MP Silas Muriuki who lost his seat to an indigenous Indian Abdul Rahim.

The rejection of a Kalenjin to serve in an appointive as opposed to an elective position in Kiambu Government on grounds of his ethnic origin is truly sad and unfortunate. It means some attitudes in the year 2014 still remain stick in unhelpful and uncivilized 1960s. Kiambu County is the nearest to the capital city of Kenya and should for all intents and purposes be the most diverse of all counties.

To make matters worse, TNA which dominates Kiambu is in a coalition government with URP with both sourcing their core support from Kikuyu and Kalenjin communities.

For good measure, the Kalenjin have demonstrated they mean good. Not only did they vote for Uhuru as president almost to man, but in the run-up to the last general election, Eldoret business woman TNA’s Jane Wangui Muriithi – a Kikuyu – was elected the market ward MCA in the heartland of Kalenjinland.

My question to Kiambu MCAs is, when will you accept that this country including Kiambu County Government belongs to all Kenyans?