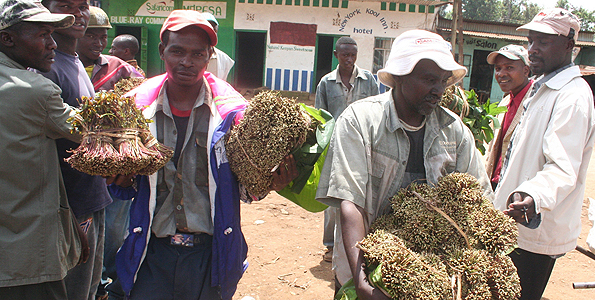 Why I write this note is that the miraa ban by the Netherlands is a pilot project intended to give Kenyans a glimpse into how vulnerable the lives of people in certain regions would be made miserable by sanctions.

Itâ€™s a learning experience to the Meru farmers that sanctions would indeed be painful, and would slay the very heart of The Meru Economy.

Now, itâ€™s so sad, Merus are living advance sanctions even before Uhuru has been sworn in, and can tell us, how it feels now. A bunch of pain. It feels like visiting hell before you are even dead, doesnâ€™t it? Under Uhuru, businesses and Tea estates in Meru would collapse.

Uhuru who ironically claims Kenya can do without The European Market, was at pains to explain how he would grow Miraa trade into Somalia, Sudan, Syria and Iran who can purchase the miraa through the black market- which essentially means half-price, selling at a loss.

Uhuru forgot that Yemen supplies to those other markets, unless we sale at half price and may be teach Chinese people how to chew miraa the cluster will be extinct.

Well, he may offer to talk to Bashir, Assad, Somalia, Ahmadinejaad, but these bad guysâ€™ currencies are useless.

But the promise UK can sure deliver is to teach Kim Jong Un to chew miraa. That he can promise. But here is the catch, North Korea is sanctioned, and canâ€™t even move a plane or ship between Kenya and the Korean Peninsula.

And then Bashir, Assad, Ahmadinejaad, are like Uhuru, sanctioned, and canâ€™t move money through the banking system like Visa, MasterCard. So what happens- move miraa payments in ships, which is a logistical nightmare? Plus those ships would be bombed by the West because we cannot trade with sanctioned nations. Uhuru would subject the Meru Nation to unfathomable pain that the Amerus can circumvent by supporting Raila Odinga.

The Merus havenâ€™t known nothing about the Opposition since the advent of multiparty. But didnâ€™t you see how they missed Opposition by a whisker in 2007. Infact they were headed there, until Kibaki got sworn in at night. Guess who they sacrificed for the middle-by night ritual ceremony- a Meru son, Muthaura.

And they sent Muthaura to Hague and also submitted evidence against him then fired him. Otherwise, how would ICC get NSIS dossiers, a government top secret agency? How would they get telephone transcripts of secure phone conversations and real-time NSIS intelligence logs if they didnâ€™t spy on him? And as if thereâ€™s no capable Meru son, they replaced him with Kimemia.

Hey what happened to Mwiraria- made him carry the heavy Anglo-leasing scandal that got him rejected in 2007. And whose voice do you send to do a dirty assignment in the Githongo tapes, Kiraitu. Misusing Meru sons, as they share the loot among themselves. Every time thereâ€™s a major scandal, ICC, Angloleasing etc, the evidence always point to a Meru son. That was a set up.

Then Miraa relies heavily on a good transport network, due to the high speed of miraa pick-ups. Potholes worse than the 90s would grace Kenyan roads under Jubilee sanctions, the planned Isiolo Airport would stall. Vote in Raila like your life depends on it, for it does!

Uhuru is a persona non grata in Europe. Thatâ€™s why its laughable when Uhuru fallaciously mentions that his government would talk to the Netherlands to reinstate miraa by talking to The Dutch Govt, how will he – via Osmosis, Telegram, Skype, At The Hague Lobby? The dude canâ€™t even be allowed beyond The ICC compounds.

Uhuru would wipe out the Miraa plant as we know it. The next phase of The Hague case requires him to be in chains and 24hr surveillance while in The Hague. So will he meet the Hague officials, in chains?

Raila who has multiple entry visas and overwhelming international goodwill continue to engage the Dutch to avert a Miraa ban using his network of friends from the influential World Economic Forum in Davos, UN-WTO to European Commission.

UHURU is making false promises when its public knowledge that he cannot deliver, which further demonstrates ignorance of a candidate who until the election season only viewed the Meru region as a rich source of raw material for the Brookside dairies whose monopolistic practices had for long impoverished dairy farmers through cheap purchase of milk- until Kibaki and Raila revived KCC.

But Cord can definitely do something. Raila with the help of the Diplomatic Kalonzo have the diplomatic capital and international goodwill to diplomatically open up the miraa market, and diversify its uses to include medical reasons.

Marijuana was recently authorized for medicinal use in Colorado and Washington states, USA.Â  Miraa is even a safer stimulant, and with its extraction, intense research and product developments, it can be acceptable to the world if properly branded and marketed.

And for the Prime Minister to have taken a photo holding Miraa, means that he is passionate about miraa being a source and symbol of national pride. Raila, a businessman himself, believes in miraa, not just as a pass-time stimulant, but also as a plant that has untapped potential that can be a source of revenue streams enhancement for this great nation.

As an Engineer and Industrialist, Raila believes that research is key, and an International Miraa Research Center in Meru to research in patented better miraa harvesting technologies, packaging methods, preservation and moreso, product diversification is worthwhile for a region that has the greatest interest in the product.

Numerous research projects done and published by Meru Scientists like Nkunja Mâ€™Imaana and Prof. Kaberia of tissue culture banana fame about diversified industrial and medicinal use of MiraaÂ  or Catha edulis continue to gather dust at JKUAT, UoN and Egerton and that is what CORD intends to actualize and implement into multibillion dollar business projects that would put Meru counties onto the path of global economic play.

Under Raila, miraa demand would even grow domestically and revolutionize Medicine. Maoka Maore, Mpuri Aburi and Gitobu Imanyara have clearly worked with Raila to develop a blueprint that will revitalize the Meru region, infrastructurally and agro-economically.

APK is not the first Meru party; ODM is, founded by Mugambi Imanyara who donated it to Raila in 2007.

Under Raila and Cord, the Meru economy would be diversified as opposed to Uhuru who is not offering a single alternative and diversified solutions to the Miraa based economy. Due to miraa, Merus future depends more on international goodwill and dynamics than geopolitical reasons.

Miraa has predestined the Merus to be an integral part of global community where politics is not tied to the Gema geopolitics, but global dynamics that Miraa trade depends on. That is why an Uhuru presidency would obliterate the Meru economy.

The Meru community which is highly reliant on an export product cannot afford a Jubilee sanctioned president, thatâ€™s my free advice. Merus are few, and can easily get extinct through uncalculated moves.

A diplomatically superior ally in State House is paramount for the survival and perpetuation of the land of Njuri Ncheke.

TNAâ€™s mistreatment and disrespect towards Kiraitu and APK leaders are also public knowledge. Kiraitu begged to work with them, but TNA spit on him. Reason? Merus have no numbers, no place in Jubileeâ€™s quantitative game. Cordâ€™s is a qualitative driven alliance building that has national unity as its foremost agenda.