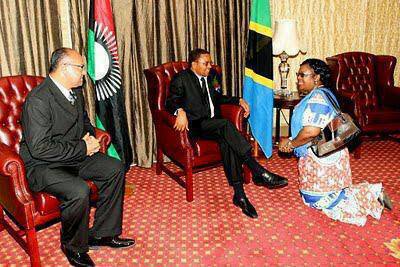 ARE AFRICAN WOMEN LOSING GROUND IN THIS PATRIARCHAL CONTINENT?
By Dikembe Disembe
This week was a long one in my life. Three unrelated events occurred right in our continent. These three events involved, or were around and about women. African women. Powerful Women.

I argued earlier, elsewhere in this platform, that Kethi’s loss, punctuated with the sickening indifference among working class kenyan women-both in political life and private sector, has rolled back gains which womenfolk of Kenya has fought for since the days of Mekatelili. This was not just a CORD loss.

To understand the wider cultural meaning of Kethi’s loss is to put it out of the current context of CORD verses IEBC/Jubilee political supremacy wars and pause the question: Why did people want Kethi to run? What did she represent? And what is her absence now representing?

Joyce Banda, only one of the two women presidents, in a photo widely circulated in the social media, is seen kneeling before some two African presidents, all men. She claims that she knelt to show respect to men in accordance to African tradition of ‘respecting men’.

Was the kneeling worth it in a continent where complete submission to the male chauvanist has constricted both the place and opportunities of women in social life? Is Banda saying that it does not matter what you symbolise in the African society and that so long as you are a woman, you have to pander to the man? Being the student representative to the Moi University Disciplinary committee; many are the times I saw female students who trembled with fear before male administrators simply because in their cultures, addressing a man on ‘personal issues’ was a no go zone. Often, I had to ‘psyche up’ these female students-some extremely bright in their classes, that it was ‘okay’ to open up and speak.

Thing is, when such images as those of Dr Banda get into the villages and bushes where Africa’s crudeness still lives; it justifies a lot of things. It justifies taking young girls out of primary schools to marry them off to old men who can barely ejaculate. It justifies office sexual assaults by men who know no boundaries. It justifies exclusion of women from most senior decision making roles in communities where the man is god. It justifies wife battery as a tried and tested final solution to domestic conflicts at home.

Finally, let me get to Dalmas Otieno; a man who recently Philip Ochieng’, arguably the best public intellectual still trading his brain and brawn in the kenyan media scene, saw as a possible replacement of Raila Odinga in Luo politics.

Dalmas is not worth my vote! To me, he is a sexually lousy Luo who is a threat to my younger cousins and female friends, especially the Luo ones.