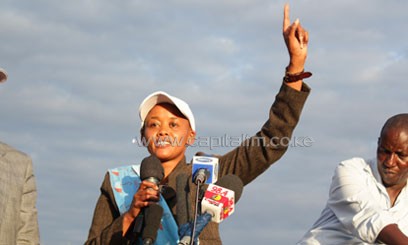 The continued scrutiny on the peoples’ senator lawyer Kethi Kilonzo is not new in our political scene, its only few months ago that Senior Counsel Ahmednassir Abdullahi underwent a near similar scrutiny though it did not generate much interest.

The overwhelming public interest on Kethi Kilonzo is turning out to be bigger than even the ICC criminal charges against president Uhuru Kenyatta and his deputy William Ruto.

In the 2012 Ahmednassir saga, a Nairobi debt collector, Mr Bryan Yongo, Â filed a complaint seeking for Abdullahiâ€™s removal from the roll as a senior counsel, a member of LSK and also from Judicial Service Commission. He claimed Abdullahi never attended pupillage or was not issued with a Certificate of Completion of Pupillage as required by the Advocates Act.

In the complaint, which was copied to Attorney General Githu Muigai and Chief Justice Willy Mutunga, Yongo alleged that the Certificate of Completion of Pupillage dated November 26, 1992 upon which the advocate petitioned for admission bears a signature that is not of the claimed pupil Master Peter Simani.Â He further alleged that there was â€œcredible evidence that Abdullahi committed forgery, making false documents, forged judicial documents and made documents without authority in making and submitting the said Certificate of Completion of pupillageâ€.

In so doing, he justified his belief that Abdullahi was not qualified to practise as an advocate, to be a member of LSK, to be a senior counsel or to hold any public office, in particular the JSC of which he is a member elected by the LSK on grounds that his admission to the roll of advocates was based on a forged certificate of completion of pupillage.

Well, the allegations trended for two weeks and as usual with our short memory nobody remembers or cares though observers note that Ahmednassir somehow coiled to the conformists cocoon and his â€œunderwhelmingâ€ performance at the supreme court of Kenya during the presidential petition may have been a result of the saga.

If we base the argument on Ahmednassirâ€™s U-turn then we can only extrapolate that the scheme to do unnecessary “due diligence” on Kethi is geared at getting her to offer her legal prowess to the Uhuru Kenyatta regime, just like the framers of Ahmednassir wanted him to support pro-Kibaki judges and later pro-Uhuru agenda which has paid off, as Abdullahi, once famed for taking on the establishment for the general good of the society is today a fully fed reactionary using his legal skills to defend and protect dubious companies accused of some of the grandest public theft in the recent years-Erad! Back to Kethi.

As one leading blogger noted â€œKethi lived in the shadows of his father and only came out after the March 4th General Elections to subtly announce to his dad and the country that her time had come. Little did we know that the old man was on his last stretch and the gods were lifting his daughter to the level of the Mutula name. This is very good; Kethi came out a pure girl, shielded from the vagaries of this world. Like a poster child, harmless and beautiful she was liked by people from both sides of the political divide. Kenya had welcomed herâ€.

Kethi is now a phenomenon, there is always something special with individuals whenever they are seen to be fought by powerful dark forces, just like Raila Odingaâ€™s incarceration by the Moi regime made him an enigma or UhuRutoâ€™s crimes against humanity charges at the ICC that propelled them to galvanize their tribes to back up the fraud tyranny of numbers, Kethiâ€™s saga is set to do the same -propel her to higher heights, may be our truly fairly elected first female president?

Otherwise how do you explain the fact that the moment the details of her registration were out, the IEBC tribunal findings were rendered subordinate to the court of public opinion. In Makueni the electorate was up in arms heckling with threats of bodily harm on the Jubilee candidate Prof Kaloki while on the campaign trail.

In this evolving episode, IEBC is coming out as an institution that cannot be trusted. As long as they did not report loss of registration slip, they cannot pin Kethi, to many Kenyans the burden of proof is with IEBC and not Kethi. After Kenyans accepted and moved on while cohesion was expended at the expense of justice, the demand that IEBC come out clearly and clear its name is overwhelming.

Whichever way mudslinging goes, the dark forces – â€œmonstersâ€- will only register a short term win, in the long run they are in for a rude shock. Kethi is set to step into politics full swing and teach the dark forces a lesson right from her nursery classroom. The saga is just a booster as it has jolted her muscles into action mode!

Just like Aung San Suu Kyi of Burma, Kethi’s star will continue rise the more they continue targeting her.