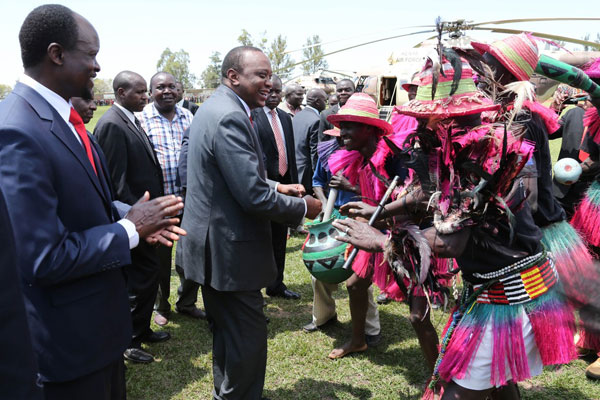 The Kenyan voter is one of the most politically informed and politically conscious of any voter. He ranks highly on that front compared to his counterparts in most developing world democracies. Interestingly, he also wins top prize for irrational decision making. You could call it rational decision making depending on your philosophical bent. In Kenya today, any thinking concerning any issue is done on the bedrock of ethnic interests. Logic and reality take back stage and are instead substituted with tribal emotion and short term score settling.

The political awareness amongst most Kenyan voters stems from the media that is full of political diet on the front page. The ubiquity of political news on Kenyan newspaper is as a result of a society that is highly politicized.

Yet, it is difficult to understand why Kenyan awareness of political affairs has not resulted into an effective democratic society. One wonders why this politically-aware electorate keeps voting into office a political class that does not even pretend to care for their (voters) interests.

We have metamorphosed into a society that allows the political class to get away with crappy policies that they pass without much thought, indeed without any sober debate – if there’s a debate at all. In some cases, the decisions that are made directly impact our daily lives in very acute ways but still, political as we are, we remain quiet. We always rubbish voices of dissent in the strongest ethnic terms. We are a confused society.

The thinking was that Kideroâ€™s actions were suspicious. The leaders, although denying this argument, felt that Kidero was preparing himself as a potential rival to the de facto leader of the â€œLuoâ€ community. Now, let’s look at this argument.

The concept of communal resource pulling – what we commonly call harambee – was conceived with the sole objective of improving the welfare of the people.

One could make a valid argument that Nyanza as a region has been left out of previous governments’ development agenda. They could, perhaps, also go ahead to add that things do not look any different with this goverment. Granted this argument is true, what would be more important to the people of Nyanza now, development or politics? A question to the cabal of leaders castigating Kidero’s actions: what alternatives do you have to Kidero’s harambees?

You mention that government should come up with policies that would make harambees unnecessary. Agreed, but you conveniently forget that that is your duty as a representative of your people in parliament. If the policies you allude to haven’t been made already then it means you are not doing your work.

Someone needs to remind you that it is precisely because you have not created policies that would make your people not have to resort to harambees that gives Kidero the room to even come in in the first place. All being said, Kidero’s contributing to a harambee in Nyanza should not be an issue at all.

Making it a top agenda in any forum is petty and distateful, even insensitive considering that the people that these harambees are intended to help are poor folk who would otherwise have no means of getting by (or building schools, dispensaries etc) if they were to wait for government to create the said policies that these politicians allude to. They would wait forever, for all we know.

A section of Nyanza residents on social media debated this issue, most of them younger than 35 years, jobless, college students or high school students. You would be ashamed how a section castigated Governor Kidero for his actions. Kidero was their enemy and the likes of Kajwangâ€™, Mbadi, and Jakoyo were the friends.

One would think that even if Kideroâ€™s actions were political, then it was the right thing to do. ODM prides itself as a champion for democratic ideals, and this means that it should encourage healthy competition. No one elected Raila as the leader of the Luoâ€™s. The Luoâ€™s have never had a King; the society has solved its problems on democratic platform and constitutions commonly known as â€œChikeâ€ since time immemorial.

Another example of emotionalism is demonstrated by supporters of President Uhuru Kenyatta and his foes alike. Our president is loved and hated in equal measure.

I have an indifference feeling towards the son of Jomo. As a president, I think he has the record of one of the most ill- performing president of Kenya in the first 2 years of office. Moiâ€™ did much better. Facts speak. Yet, this reality is often a subject of great debate lying on self-destructive ethnic base. When Uhuru â€œgagged the mediaâ€, most Kenyanâ€™s felt it was too much. However, a few Jubilee supporters actually felt it was the right thing to do.

The Media was bad. The president term is only 5 years, what happens when the president leaves office, and another president come, will the same people still support a society with limited press and media freedom? It is right if our Man does it, it is wrong if someone else does it. What kind of country are we building? Will our children be proud of us?

I donâ€™t think I have an answer, but I think Kenya is graduating to the level of collective psychopath syndrome. We are becoming a self-destructive society, and ethnic politics is the cancer that is consuming our middle class, academia, and Minds. Yes, an immediate change is the chemotherapy that we need. Uhuru Kenyatta, William Ruto, Raila Odinga and Kalonzo Musyoka are not the cancer doctors that we need.