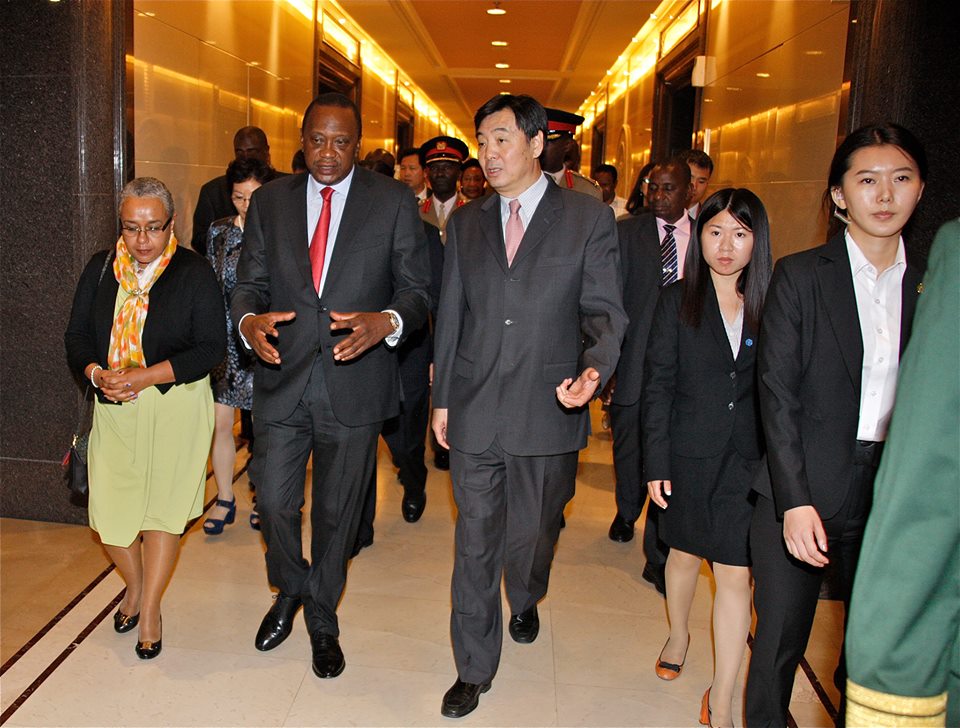 In China visit, after the quintessential debacle that the Moscow tour was, President Uhuru Kenyatta will lead the biggest delegation of Kenyan-Africans ever witnessed in the history of international trade tours by begging African presidents. Dubbed the “Tyranny of Business Numbers” show of might, the China visit is meant to overshadow, and distract the support base from the Russia miscarriage of presidential state visit.

According to the latest presidential press release by the Esipisus of this world, at least 50 “business and industry people” from Nairobi, Nyeri and Murang’a are in the Beijing Entourage; a number which our sources in China said the People’s Republic officials found so alarming.

Here is part of the dispatch from the Presidential Strategic Communication Team:

“A business delegation of more than 60 people â€“ who are paying their own bills in full â€“ will be at hand to join the President on this leg of his tour. It includes some of the most prominent personalities in industry.”

If in Kenya today you sample a list of 60 most prominent personalities in the business industry in Kenya, what you come up with is a list which reads like standard class attendance register of a primary school in Gachie village, Kiambu County.

Be the list as it may, what shocked Kenyans is the now self-evident fact that a clique of well-connected Mt Kenya wheeler-dealers in Nairobi, many of them being beneficiaries of the last 10 years of Kibaki’s voodoo strangleship andÂ Mt Kenyanization of all possible and probable strategic public resources of the country, have at last openly come out to show their faces, names and interests.

Let’s say it for what it is; no sane private enterprise individual would wish to accompany a president on a fiesta tour of an emerging world economic power. It also happens that on the table are the biggest tax-havens of Kenya: electricity and power generation.

“The problem with these business people accompanying Uhuru is that they look at opportunities in terms of their on tribal, selfish gains, not the public good,” a source privy to these characters’ itinerary said, adding that “one of them recently snubbed this same kind of meeting by US President Barrack Obama when he visited Senegal”.

The “Look East” policy of President Kenyatta is premised on the illogical foreign policy of sidelining the Western world while opening more opportunities for the Chinese to do business with Kenya. It was a campaign gimmick which ought to have ended after elections but the Chinese, believed to have funded the Jubilee campaigns in the billions, have kept their guns blazing.

Meanwhile, noisy TNA politician Moses Kuria, known for writing long paragraphs in mainstream newspapers has been awarded for all his sweat, verbiage and rantings.

Kuria, who established himself as a “Raila fear-monger” per excellence during the last elections and after, will be attached in the trade department at the Ministry of Foreign Affairs currently under madam Amina Mohammed. However, a feud is already developing in the ministry as confidants of Ambassador Mohammed claim Kuria brings with him the negative media baggage reminiscent of what another propagandist took to the presidency.

“The guy is rancorous and combative; they would have better left him in the (TNA) party,” said the new source at front desk of Ambassador Mohammed who openly dislikes everything Kuria cherishes, like writing long paragraphs with little content in newspapers.

Our further inquiry at the Ministry of Foreign Affairs indicated that the position was specially created for him, it has never been in the MFA structure, usually all trade/commerce attaches are under ministry of trade, which was jumbled with that of East Africa and thrown to another lady Cabinet Secretary.

For this century, moderation is what we can urge Kuria, because after the near fatal deployment of another of his type- one Muthui Kariuki – the kenyan public are unanimoius those surrounding President Kenyatta must act, behave, and carry themselves in a presidential manner.

Here is part of the reason we urge moderation. This is what the arrogant but less bright Kuria posted on his facebook page.

â€œEconomic Diplomacy: For the next one week its happening in China. The Kenya-China Business Forum will be held on Tuesday 20 August in Beijing chaired by President Uhuru Kenyatta. I will depart Nairobi Saturday 17th August at 23.00 hrs to join the Look East team for the next one week. If they take advantage of my abscence kuleta nyokonyoko call me on the other lineâ€