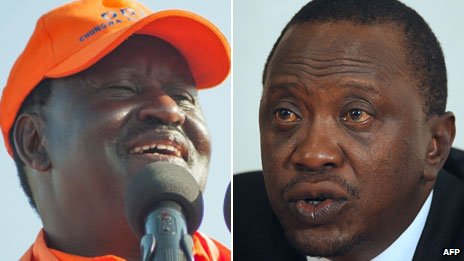 The news of Uhuru Kenyatta withdrawing his commitment to attend next week’s presidential debate will perhaps rob Kenyans an opportunity of the best debate zinger ever.

In the first presidential debate, candidate Dida pulled a series of funny lines but none was as funny and serious as that by Prime Minister Raila Odinga, who in good faith and out of concern wondered how Uhuru Kenyatta will govern Kenya from the confines of the International Criminal Court where he is facing trial.

Kenyans were left to speculate why Uhuru Kenyatta pulled out of the presidential debate, reasons given by his presidential campaign secretariat were not convincing especially to his supporters.

“If anybody was to pull out of the presidential debate it should have been Raila Odinga, the three Mt Kenya candidates (Karua, Muite and Uhuru) ganged up against him, but he came out just fine”Â  Nephat Kinyua a media critic based in Nairobi said.

“Uhuru is scared of Raila pulling another zinger that may send a strong message to the electorate; can you imagine how damaging it could be for Uhuru and Jubilee if Raila for examples accuses him of accepting a bad inheritance of 500,000 acres of land from Jomo?â€ Wondered Trish Njeri an advocate practicing in Nairobi.

Uhuru had a choice upon attaining age of majority to reject such a bad inheritance, but he instead kept it and now he is using it to buy votes. I can imagine Raila in his element asking UhuruÂ  Â â€œOf what use are the 500,000 acres of land, part of which is lying idle while thousands of his own people are living in IDPs for years, others are dying of hunger for luck of arable land to farm? that could be a debate zinger of our life time” noted Ms Njeri

Another probable debate zinger will be â€œmy brother Uhuru is alleged to be the patron of Mungiki, they have come out and teamed up with Kimemia to threaten the chief justice and what did he do? He immediately defended Kimemia, I wonder how he will implement and respect the letter and spirit of the constitutionâ€ Ms Njeri observed.

In the USA the most famous debate zinger is the Lloyd Bentsenâ€™s devastating put-down of Dan Quayle during the 1988 vice presidential debate after Quayle compared himself to John F. Kennedy: â€œSenator, I served with Jack Kennedy. I knew Jack Kennedy. Jack Kennedy was a friend of mine. Senator, youâ€™re no Jack Kennedy.â€

You have to watch it to appreciate how funny and heavy it was.