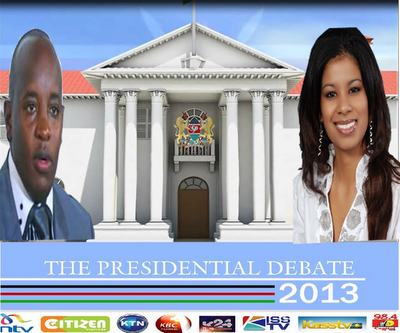 First and foremost, we must commend the organizers of the presidential debates for the initiative and courage. Â For years, Kenyans have elected public officials based on all other considerations than competitive articulation of vision and ideas.Â  With the debates, it is no longer a matter of euphoric rallies, manipulation and obfuscation. Kenyans will have a unique opportunity to observe their aspiring leadersâ€™ demeanor, command of the issues, defense of their records and vision for the country they seek to lead. In other words, Kenyans have stepped into the arena of democratic political processes.

According to press reports, thousands of questions have been submitted to the organizers of the debate. We have no knowledge of their contents or motivations. In this piece, we seek to suggest possible outlines of critical public policy issues for every presidential aspirant based on their record and published manifestos.

Obviously, the list is by no means exhaustive and does not represent any particular view-point, only seeking information that would help ordinary wananchi make an informed choice come March 4, 2013. It is predicated on the unrealistic imagination of the author being one of the moderators.Â  Â They are listed in alphabetical order.

1. How would rate your performance and effectiveness as member of Parliament for Gichugu? Specifically, how do you explain the unaccounted for CDF moneys according to the National Taxpayers Association report?

2. During the disputed general election of 2007, you played a key role as a PNU point-person. As a legal expert and political operative, can you shed light on what your specific contributions were to the outcome of the election?Â  Do you have any regrets about any positions that you may have taken at KICC and thereafter?Â  How do you respond to those who argue that you should also be part of the ICC process?

3. As the only female presidential candidate in the race, are you trying to make a statement about gender equity in Kenya? Â If so what is that statement and why now?

For all the Aspirants

As the aspirants step up to the podium for this historic debate, all Kenyans should embrace diversity of thought, opinion and vision. No one person, alliance or community can claim a monopoly of ideas on how best to advance the nationâ€™s interest.Â  Nonetheless, the seekers of the presidency have a unique obligation to justify their bids. These questions (and others are the debate) are just but a minute piece of the broader national discourse.

*The author is an attorney at law in the States of Minnesota and New York in the United States. He is also an advocate of the High Court of Kenya. He serves as the Chair, Peter Kenneth Diaspora.