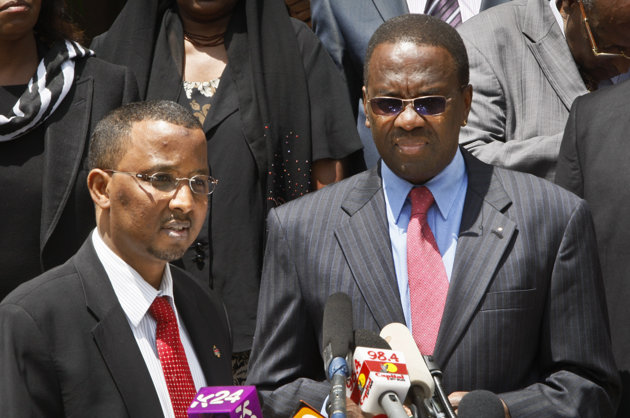 Itâ€™s so sad that even after billions of shillings were sunk into the electoral process, the IEBC, just like the ECK didnâ€™t deliver a credible election. 5 years and Billions gone to waste.

Undeterred, Raila remains the flier of the reform banner in Kenya. Take this to the bank, he would have conceded had he lost in a fair and democratic process.

As is his element he is willing to take on the system by its horns. Â And he has made tremendous progress in that front.

Remember in 1980s folks like Raila, Muite, Kiraitu et al would never have been allowed in the ballot. Now they cannot only stand for MP, but also run for President. The democratic process, thanks to visionary leaders like Raila, is in place.

However, the fight is now to ensure that all Kenyans have equal chances of being president. Loopholes for rigging are the greatest threat to our democracy, and Railaâ€™s court action is a first step in a journey towards the cleaning of our electoral process.

Like he made it possible for Kanu diehards of the single party era to be able to stand for President, start parties and so on, so will Kenyans thank him over his fight for instilling fairness and transparency in our electoral process which is the missing ingredient in our democracy.

As it appears without fixing our electoral laws, it doesnâ€™t matter how many millions of votes one wins or how many elections we have, the wielders of impunity will have their way!

The progress that a balanced Supreme Court case proceeding will do is to give CORD a chance to articulate their forensic findings on the flawed electoral process. Cord only has to prove that 10,000 of its votes were excluded from the tally.

Thatâ€™s enough to erase the 50%+1 vote requirement which Jubilee is said to have a met by a slim margin of a paltry 4,000 votes. The president elect would become a second round candidate, and we would have Kibaki for a few more months.

This will be interesting courtroom drama. Will the Supreme Court order a second round, a re-tallying of votes, or out of court settlement? Out of court settlement means a negotiated way out of the impasse, where the parties will share power as co-equal partners- on the presumption that its difficult to know who won the elections.

But a second round with sound checks and balances on the IEBC would be the ideal judgment.Â  Itâ€™s upto the courts, what they decide We The People shall abide.

The outcome is what will give us the final word. Those hurling insults to Raila should stop, because going to court is a peaceful option, it ainâ€™t criminal; Al Gore too went to the Supreme Court when the election went to the wire! Itâ€™s not about justice being done, but also being seen to be done.

Then in the Supreme Court someone would have to explain why servers had to go down. Negligence Pah! Was it after realizing that online transmission leaves traces of forensic evidence? Then thatâ€™s subversion of justice right there.

The play card of the evil forces during the vote tallying shall be unveiled to the public. Blow by blow, the evil designs of a cartel intent on capturing power â€œby all means necessary shall be exposedâ€.

By the end of all these revelations, we shall know answers o questions like: Was it with the knowledge of IEBC officials? Did those in the know report or with-hold information? What did they stand to gain? There are no secrets between 2 people, and this is even more evident when its numerous people involved in a clandestine operation.

This case is the most important thing to happen to Kenya. It is an opportunity to further reform our electoral legal framework. This case is not just about 2013, itâ€™s about posterity, itâ€™s about â€œWE THE PEOPLEâ€â€¦.our democracy is on trial.

Good thing is that in the courts, no hiding behind the veil of hate speech. In the courts no claims of defamation. Maybe perjury, but also what I am privy to is material and irrefutable evidence, which will even shock the Supreme Court Justices and the world. CORD is armed with the truth. And that truth will liberate Kenya.

That truth will save this country from falling down the cliff. Uhuru and Ruto are only hanging on a thread. A 4000 vote thread. Justice will prevail over rigging at the Supreme Court and down like thunder, the Jubilee sandbag will drop, into a bottomless abyss. IEBC members will resign en-masse.

Uhuruâ€™s legitimacy will tank, as Raila gets vindicated. With people like Raila Odinga, Kenya wonâ€™t go under. They wonâ€™t let that happen. Things have changed in Kenya, but a few things have stayed constant, and thatâ€™s Railaâ€™s principles.

CORD â€˜s little burden in court Â is to identify the traces of evidence left in the tracks of a cabal they suspect masterminded a clandestine operation like the earlier one of a 50 billion budget error. And because they were never held responsible for that earlier error, like a snowball, they have decided to go big with electoral errors in 2013. I have faith in the Supreme Court.

And Raila is right, the 2013 elections, like 2007 elections were not credible. Electronic voter tallying was the new standard in Kenya. IEBC failed to meet those standards despite massive resource allocation of huge salaries drawn from taxpayer coffers. Even the purchase of the ill-fated system itself was mired in controversy. Kenyans surely didnâ€™t get value for their money!

As I have observed previously, one thing leads to another. After they stole the 2007 elections, Annan flew in, then we had the Waki envelope, then Ocampo came, and now in self defense, the ICC duo had to secure the presidency â€œby all means necessary, credible or not credibleâ€.