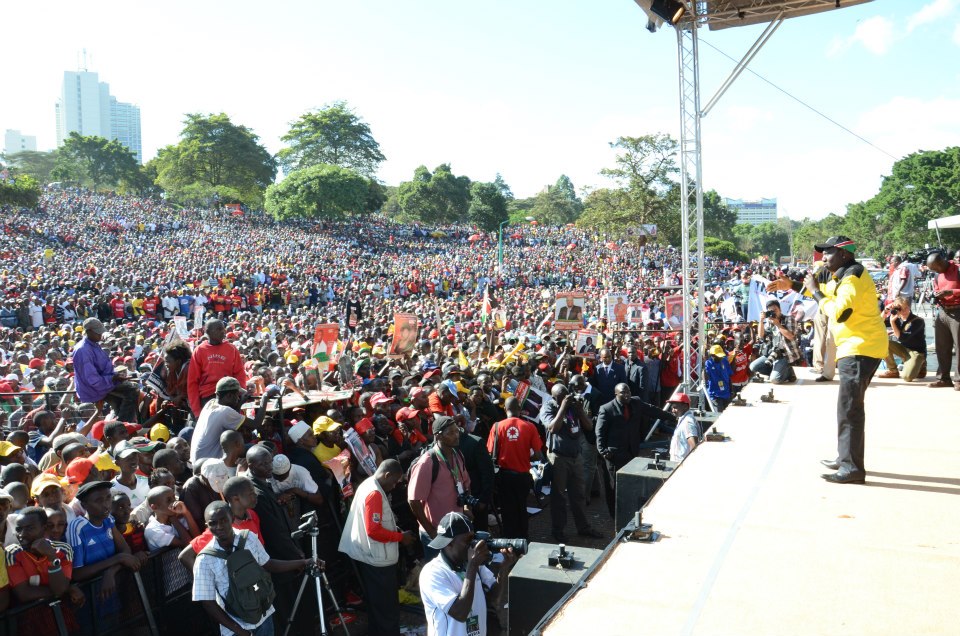 By: Rashid Wanjala for Kenya Today. (This will be a two part series opinion piece, part II will reveal Ruto’s frustrations)

That a well intentioned objective opinion poll has sent shivers down the spines of Jubileeâ€™s Uhuruto duo is not in doubt. It triggered Ruto to have a Paranoia attack right in the middle of a rally.

Ruto, whose only wins have been whenever he works with Raila, sees defeat in the horizon even before this game is over- it was evident.

The rally at Uhuru Park (which was named in honor of a dictatorâ€™s birth of a son called Uhuru) was addressed by crybabies who looked tired and beat up- underdogs, into whom reality has begun to sink.

Mwakwere, 72, he of the analog generation almost lost his voice trying to convince a reluctant crowd that he has always calculated to be on the side that wins. No thatâ€™s a lie. In 2007 he was on the PNU side that lost but rigged. Kenyans ignore Mwakwereâ€™s wet dreams.

The Infotrak poll which inundated media circles on Saturday showed Railonzo-Weta trio ahead of the presidential tickets presented in March 2013. A previous Ipsos Synovate poll in mid December also put Cord in the lead. The writing is on the wall. Those with eyes should see.

Every possible indicator and multiple sources of data is in Cordâ€™s favor, including Ruto and Uhuruâ€™s body languages. Kenyans are scared of sanctions. Jubileeâ€™s other name is SANCTIONS. Emaciation, hunger, disease, oppression, death, insecurity, business collapse of Armageddon proportions and infrastructural destruction, are all part of a package that the Jubilee curse promises.

Rutoâ€™s vitriol at Uhuru Park against a woman pollster was filled with ethnocentric and xenophobic hate against an innocent woman whose only crime was pronouncing scientifically derived data, the attack may strengthen Bensoudaâ€™s case against Uhuru and Ruto at The Hague. Ruto forgot he has a case. Talk of Ruto-nesia.

Ruto had numerous arguments to make against Info track through his sidekick Adan Dualle but as is his element he chose the destructive diatribe path that took him to Hague, the path of ethnic hate and vitriol against an organization that has consistently made accurate objective predictions including a Raila win in 2007.

That because itâ€™s led by a woman from an ethnicity that isnâ€™t his own, then itâ€™s biased when its research shows Raila would do a 52% first round knock out against Jubileeâ€™s 39%Â  , what an analog argument. Numbers donâ€™t lie.

I havenâ€™t heard Cord Luminaries make such retrogressive arguments against Margaret Ireri of Ipsos Synovate. Infact I have instead used Ireriâ€™s cooked up results as the premise of my arguments in earlier articles, without crying baby that they are cooked.

Ruto should issue a counter-thesis argument against Info trackâ€™s opinion thesis, rather than engage an innocent woman with hateful, malicious and tribal diatribes intent on stoking embers of ethnic based 41-1 mob justice against entrepreneurial private sector organizations.

We now know who pens the useless anti-Cord blog articles intent on peddling falsehoods about UKâ€™s overrated invincibility circulated by well known bloggers. From speeches to placards, watch those tapes it was all from the bloggerâ€™s drafted blogosphere, nothing based on science and/or logic.

Jubileeâ€™s strategy seems based on fiction driven blog articles that cannot in anyway match CORDâ€™s Obama like based campaign strategies that the public is evidently believing and trusting. Not when the intellectually dwarf are the TNA strategist.

Cord strategy team comprises top-secret intellectual heavyweights that I cannot reveal due to classified information. Cord thrives on the truth; smart strategy and tact- not hate speech as spewed at Uhuru Park.

For those who know Raila Odinga can acknowledge that he has always held the belief that the truth and only the truth should be the only basis upon which men prevail at elections. That he would rather lose an election than con his way into the presidency through falsehoods and distorted facts. Honor, integrity, truth are the virtues upon which the CORD movement was founded upon and will emerge victorious.

Whoever does opinion polls and finds CORD and Railonzo ahead, fine! With Raila as the leader Cord wonâ€™t betray its core values for political expediency. It was the reason it took it longest to conclude alliance talks, because no false promises or exchange of was tolerated in the negotiations.

As this happened Jubilee made catch after catch as it built its house of cards or do I say house of cash, or sand castles. They built it fast, and its collapsing fast. Scattered into the four winds.

Participants were expected to join Cord out of conscience and not manipulation, coercion or bribing. Faith, hope and love for country are the glue that holds CORD together. That is why it is enduring. That is why Cord is a fountain of peace and tranquility, without infighting whatsoever.

That is why together, Cord leadership has been able to turn around the mood of the nation from being dismissed as underdogs to now invincible â€œtop-dawgsâ€. Opinion polls have consistently showed Cord headed to a crushing cruise to victory.

Numerous leaders including Mudavadi and Eugene have been betrayed by Jubilee. Jubilee is losing members in droves, days on end, talk of member hemorrhage. Whoever Cord recruits on the contrary, it keeps. Itâ€™s called member retention. A tweak of what in corporate-speak, we call employee retention.

That is why at Uhuru Park, an air of defeat and dejection rented the atmosphere. Other than just bar talk, not a single truly digital idea has been forthcoming.Â  Among all the speakers at Uhuru Park, Ruto, obviously due to his paranoia problem, seemed the most incensed by the mood of the nation, which is overwhelmingly CORD. Watch those tapes again he was even scared of mentioning Raila Odinga by name for fear of a psychiatric breakdown. You cannot dare mention the name of the next President in vain. At least not when you plan to have URP negotiate with his government after a Round one win.

I shared the Uhuru park tapes with an award winning Canadian based Psychiatrist buddy of mine and he was like â€œan anti-anxiety drug called Haldol or Ativan could help Ruto deal with such anxieties of a humiliating loss ahead of March 4thâ€. That â€œhad he indulged in a dose of Haldol before the rally, his speech, body language and thought content would have been different. He would have been more relaxed without paranoid delusions in the podiumâ€.