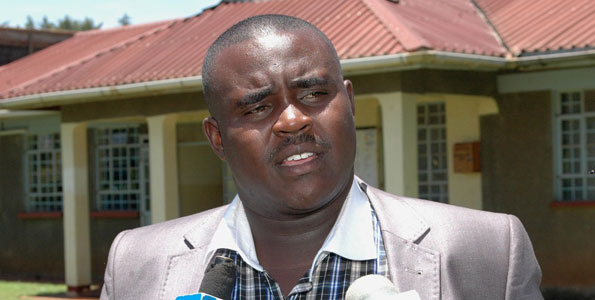 The play, shackles of Doom, scripted by playwright and politician Cleophas Malala, 27, last week lost a long battle with the political establishment in the educational sector in this country. With it went the hopes of some dozen students at Butere Girls High School.

A synopsis of a scene in this play is thus: â€œThere is a land called Kanas whose inhabitants are refered to as True Kanas. The land has oil though the poverty-stricken True Kanas are ignorant about it. Soon, outsiders arrive offering a pretty girl called Wamaitha (already three weeks pregnant with Kimaniâ€™s child) in a well choreographed marriage to a young man called Lopush, a â€œKanaâ€ in exchange of land. Her industrious community constructs the Mafuta Oil Refinery where employment is prejudiced and based on nepotism; soon the True Kanas begin to agitate for equal opportunities which lead to (only) one of their own given a watchman post in the company. Due to nepotism and unequal resource distribution, schisms develop between the two communities which violently clash leading to death.â€

To adherents of literature and drama, these hypocritical interferences are not new. In the past, they used to take a moral viewpoint, with churches and cultural purists breathing fire on literary texts which presumably did not conform to popular myths, be they religious or traditional. A recent debate about the banning of Witi Ihimaeraâ€™s The Whale Rider as a set text in secondary schools is a case in point.

The ban of this play even after qualifying in three lower stages, during which their play was adjudicated by many senior experts of theatre performances, including a professor-a pinnacle of intellectual thought- punctuates the incoming presidency in a very subtle way.

The silencing of dissenting voices, the creation of plastic sensitivities on public discourses around issues of ethnicity and land, the symbolism of the kikuyu-Kalenjin alliance on political conversations, where the kikuyu is always at the top with the Kalenjin willingly sleeping below-from the presidency down below, the determination to erect distinct socio-political boundaries between the kikuyu and the Luo through commissions and omissions of certain key institutions, like the police, or by willful interference with electoral processes, continue to rear its ugly head when we read such official chicanery as what befell Butere Girls.

Performing drama in an educational system where co-curriculum activities are seen as a waste of class time is not easy, it takes dedication, and it feeds on passion.

I took a mental flight to spend a few minutes with these girls when the news first came in. You could see the devastation; the long hours outside class, the assignments left undone, the notes to be written, the jeer and sneer from garrulous classmates who had not got chances to be in the cast, the â€˜loveâ€™ letters which will not be hand-delivered, the Kodak moments with the boys at Lenana school or Starehe or Upper-Hill; the once-in-a-lifetime state house gala, or internally, some uncompromising maths teacher who had opposed the whole thing . . . nothing ruins a high school studentâ€™s life more than a lost chance to leave the school compound.

The banning of this play dealt an academic blow to these girls. They will need prolonged counseling to revert to normalcy. Those of us whoâ€™ve experienced such a fate understand better the taunting by our close friends and â€˜enemiesâ€™ alike, and, lastly, the emotional struggleâ€¦to accept and â€˜move onâ€™ in a final acknowledgment of fate.

So did the â€˜custodiansâ€˜of our ethnic morality see it this way? Did they look at the challenge of reenacting drama? The stage fright? The heavy costuming and decoration which turn beautiful young women into old narcissistic employers in a drama scene depicting a rotten society of the wamaithas and the kimanis of this country? How about the dialogue and action during the actual acting? The struggle by the girls to maintain audience attention, and to act within their time allotment? To create a lasting impression on the adjudicators that they did their best and deserve the price? What is hate-speech in drama?

If the use of the names â€œWamaithaâ€ and â€œKimaniâ€ contributed to the banning, presumably to symbolize the greediness of the kikuyu tribe, who stands accused? Is it not true the kikuyus are known to have such tendencies? Is drama not supposed to create an illusion of reality? If the reality is ugly (as it is), should we deny it? Why the double standards?

Looking at the local TV programmes in both Citizen TV and KBC; shouldnâ€™t others also accuse the kikuyus of misrepresentation? Look at Omosh in Tahidi High or the career watchman (a luhya) in Papa Shirandula. . .look at Vioja Mahakamani?

In all these plays, the depiction of others are only peripheral, only the kikuyu are seen as model judges, model teachers (Mr Kinuthia) and perfect urbane grand-mothers! Ondiek Nyuka Akuota is the worst depiction of a Luo. Where are the kikuyu thieves, drunkards and tribalists? When you finish watching these plays and the cast list begin scrolling on your screens, thatâ€™s when you realize all those producers, editors, script-writers, cameramen, directors, managers et cetra are either a Mwangi, Njoroge, Maina, Thuku, Kamau, Waithera, Wambui etc! Why has the other communities not raised the ethnic bar and sent a protest a note to Mzalendo Kibunjia?

Dikembe Disembe is a social commentator, writer and media critic; Your feedbackÂ  on the comments section here below.