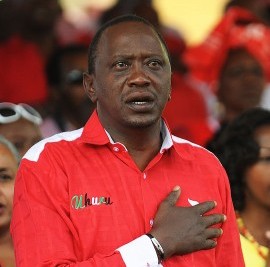 May I re-confirm the death of justice and democracy in our country! A few days ago I wrote about the botched birth of the new baby and how the ‘doctors’ were working trying to save her life in Our Country’s largest Justice referral hospital ICU! It turns out, the ‘surgeons’ of the law, despite glaring evidence of mischief in the electoral exercise; put a knife through the baby’s heart bringing an end to an otherwise much anticipated recovery!

The Supreme Court of Kenya wasted a whole two weeks of our time when they’d have as well delivered their verdict on day 1! It’s unbelievable they threw away the baby with the bath water! In their unanimous decision, they again promised to deliver the rationale for their decision in another two weeks! It’s nonsense!

From History we know that good leaders are an endangered species:

The list could go on and on. We however count ourselves lucky today since Raila is still alive!

In Kenya particularly, we’d got to a point where we going to begin to dig deep for answers to many of our questions. With the way we’ve been shortchanged, there’s no chance that Uhuru will lay bare the truth about the corruption and murders during his father’s and mentors’ presidencies! Historical injustices both from post-colonial times, mysterious deaths and land grabbing will now be covered even deeper!

Officially Kenya now consists of two provinces- and impunity will serve those who do not belong!

Uhuru is a tribalist first and foremost, a greedy land grabber and a selfish elitist opportunist completely detached from the common Mwananchi! Uhuru has no regard for the rule of law and brings back era and aura of his father and former dictator President Moi! Just watch him refuse to attend his court cases bluntly! There will be no thought for the 2007/8 victims!

With Uhuru, Kenya stepped back in time, Kenyans however, will give Uhuru a rude awakening during this parliament and most definitely the next round when Peter Kenneth will trail again!

Now that itâ€™s done, let me congratulate The Rt Hon Raila Odinga! Raila IS a champion of democracy and because of him, I can spit and cough and not risk my life!

There’s a huge Leadership role for Raila Nationally to promote civic Education, continue the fight for democracy and justice. It’s very clear we have a very long way to!

Raila’s only mistake was the wrong advisors, too many hungry foxes around him and utter wicked scavengers like Miguna! Musyoka, wako and some other spent cartridges didn’t help. Raila would have forged an alliance with Peter Kenneth, Gitobu Imanyara and such sensible figures who’d have delivered votes for him! Turks like NyongÃ³, Orengo, Kosgey weren’t enough!

Nonetheless Raila has been formidable and will be remembered for his tireless, non-partisan and real contribution to our Country! And for, Raila is the best president we were cheated off! I remain strongly supportive – and a diehard admirer of Agwambo, Tinga, Hummer- RAO- The Engima!

And now that we inevitably have to accept the verdict, I have a few suggestions for Uhuru!

Let me promise you that we will hold you accountable should you follow in your father’s and Moi’s footsteps!

Unite The Country. Be Inclusive of ALL our tribes! Kenya is made of 8 regions, not 2!

Market Kenya abroad- No Kenyan should need a visa in Africa

Tell us what happened the the political leaders who have died in mysterious circumstances in Kenya in the last 50 years! We don’t want to punish anyone or revenge but to start to heal.

Scrap the nonsense about primary school laptops! Start to think like a common Kenyan- 99.99% of us were not born at state house! Children need drinking water and if possible, milk and nutritious biscuits so they can learn!

Let’s have public services that deliver!

Deal with traffic carnage on our roads- regulate training, licensing, policing, vehicle registration and improve the roads, signs, educating the public to change the current culture and attitude!

Make it a law – 18 year olds are offered IDs without corruption and passports are issued to all Kenyans without bribing anyone!

Control our borders right from the Nairobi International Airport! And while you are there, please rename the Following:

Prove to us, it’s not Kamau wa Ngengi’s reincarnation! Show me, we haven’t gone to the dogs! And if you did nothing to worry about, I’ll personally come along with you to The Hague, to support you, as you prove your innocence!

I know, injustice is the oder of the new world order, and I want to commit you Uhuru Kenyatta and William Ruto in Prayer!

And Oh, I had completely forgotten about Mwai Kibaki! The thing about Kibaki is that there’s nothing for which to remember him. Even his own bothers and sisters live in squalor! There’s no way he’d rembered the man who said “Kibaki Tosha”!