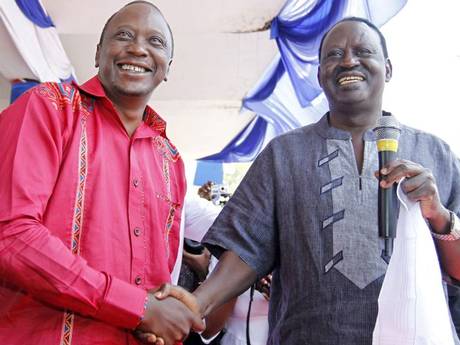 As we head to the polls on March 4th, and if discussions on social media are anything to go by, then we are in deep trouble as a country. No doubt that many Kenyans are praying for peace to prevail post March 4th.

It is a shame that majority of us are going to vote along tribal lines, very unfortunate that even the elite middle class are part of tribal merry. A little comforting that folks in Rift Valley are now free to chose any other candidate not necessarily the arrogant Willing buyer turned wailing buyer!

A quick stock taking of major developments since the 2007/2008 Post Election Violence reveals that nothing much has changed in terms of lifestyle, many Kenyans are staying in the same estate, driving same make of a car and same diet, zero change. However for a few Kenyans, life after PEV got even better; here are the highlights!

He went back to Statehouse/Harambee House with 70% powers (contrary to the agreed 50%). He enjoyed a 2.3 Million monthly salary, paid no rent, a presidential motorcade, super state security and other trappings of power, he continued to dish out state jobs to his Mt Kenya/Muthaiga golf club friends, awarded himself a massive pension more than any other president in the world; a dream pension most super power presidents can only wish for. All was and will be paid from your taxes!

He Â became Prime Minister, got shortchanged of his supposed 50% share of government, enjoyed a monthly salary of over Kshs 1.5million, got a big office, enjoys state security and state serviced vehicles among other benefits of his office. He travelled abroad to get investors to Kenya, pushed Kibaki to appoint better qualified and competent Kenyans, pushed for the new constitution, got cleared of any wrong doing in the Kazi Kwa Vijana mini scandal.

He served all Kenyans irrespective of tribe, gender, religion etc. He embraced an open door policy at his PB house office where all Kenyans with grievances converged; Nairobi hawkers who mostly hail from Central Kenya camped there, Teachers, Nurses, Matatu operators, just to mention but a few.Â  He was abandoned by tribal lords in the name of ‘Pentagon’.

Uhuru became Deputy Prime Minister – he much deserved it after helping Kibaki cling to the presidency, got paid a high salary, security and state vehicles, formed KK (later renamed it Jubilee Alliance) to help ‘Stop Raila’ from winning the presidency hence maintain status quo for a cosmetic implementation of the constitution.

Uhuru pushed for the appointment of Eugene Wamalwa to the Ministry of Justice & Constitutional Affairs with the aim of diluting the constitution, bought all ODM pentagon members, paid William Ruto a handsome 3.8 billion for the Kalenjin vote, frustrated Mau resettlement by withholding funds at the treasury to discredit Raila Odinga, selectively allocated only Kshs.10, 000 to Kisii IDPs while other IDPs (Kikuyu) pocketed Kshs.35, 000 + land for resettlement.

As Minister for Finance Uhuru oversaw the worst exchange rate ever in the history of Kenya shillings vs the dollar, the economy nosedived. Cost of living went up, killed KANU and PNU, got indicted by ICC, poached leading media staff from Citizen TV/Radio, built a formidable TNA party,

Uhuru hopes to be the first president in the world to rule Kenya via Facebook, Twitter and Skype from the ICC. He also hopes to get Kenya new trading partners like China, North Korea, Syria etc just in case Kenya is slapped with sanctions like Zimbabwe.

The case at the ICC may collapse, the Prosecutor has since confessed that Uhuruâ€™s men bought out all the crucial witness.

He became Vice President, Muthaura gave him all the protocol powers, got his friends jobs in the Kibaki government, he just moved into a mini statehouse worth over Kshs.100m, joined KKK but quickly realized Kenya is bigger than three tribes, he is set to be the first deputy President under the new constitution in the March 4th elections.

Ruto moved out of ODM, joined UDM and then URP, ran for presidency theoretically long before the campaign period, bowed out of the race and sold his Kalenjin support to Uhuru Kenyatta, engineered a maize scandal,

Ruto voted for the Hague Trials against Local Tribunal,Â  apparently 90% of prosecution witneses were provided by the PNU government agencies with collaboration of local NGOs, though he blamed Raila it later emerged and became clear that it was Martha Karua and the NSIS who framed him,

Ruto voted with Kibakiâ€™s PNU to defeat important legislation in parliament, got heckled in Baringo, Kuresoi, Rongai for shoving his nominees to the electorate. Joined Uhuru Kenyatta as running mate and hopes that the ICC will acknowledge that his tribesmenâ€™s claim for historical land injustices is buried history.

He became Deputy Prime Minister even though he never deserved it, got paid a high salary, security and state vehicles, paid no taxes, got kickbacks from the purchase of city council commentary and has since been made a state project with easy cash for campaigns with a sole purpose of ‘Stopping Raila’ from becoming president.

Members of The Pentagon became ministers and in 2012 Uhuru paid them to join Jubilee Alliance (former KK), they are currently cash bathing in Kenyattaâ€™s ill gotten fortune.

After helping Kibaki cling to power was later forced to resign, refused to apologize for his role in the 2007 rigging, together with her PNU counterparts and government agencies framed William Ruto, Henry Kosgey and little known Kass FM radio presenter Sang at the ICC.

ECK and the commissioners

The commission got a new name IEBC, retained most of its staff, former chairman and vice chairman Samwel Kivuitu and Kihara Mutu respectively have since died RIP. Other commissioners are running their consultancies/businesses.

Still counting our losses through:

Think hard before you vote or engage in violence over politics! Vote Wisely, Vote Kenya! #ChaguaPeace