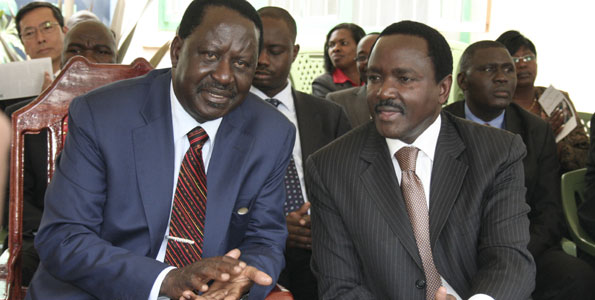 RAILA hasÂ  told us TO MOVE ON but he has not told us where to; well, I will move on to the unknown! But even as I move on to darkness, I put forward to Raila Odinga, Uhuru Kenyatta, parliament and senate that we should not misuse tax payers money anymore in the future in the name of elections.

The truth is, we cannot democratically elect a leader. Apart from 2002, Kenya’s elections have always been decided in the boardrooms of Windsor Golf Club or Kabarnet Gardens way before unsuspecting Kenyans line up in the gruesome weather conditions to ‘elect’ leaders of their choice.

The â€œelectionsâ€™â€™’ we hold, just like the Zimbabwe version are a mere ritual and or national/international public relation stunt. There are those that are black listed by the who is who in the status quo and you will hear them telling you publicly that “I may not know who is gonna be president, but I know is not going to be”.

Even courts led by “some six people” are a mere public relations gimmick. Kenyans can remember that (even) as “some six people were pretending to be at work, eating public money for nothing, invitations to the swearing in ceremony for one candidate were already at the government printer. Kenya’s institutions are in place just for the formality, to meet UN standards (Kenya being a member) but not to practice the standards.

I put forward that elders from Mt. Kenya region should meet with their counterparts from the Rift Valley every 5 years to discuss who is best suited to take over from who. This will save Kenyans the frustration and annoyance at â€œelectionâ€ outcomes. It will save the candidates time and the shock of working hard to win elections while others work hard to be declared winners. Kenyans will accept the decision of the elders and ‘move on’.

First business of the house therefore should be to amend the law. Let them use their tyranny of numbers to change the constitution and the clause requiring elections. And do not tell me about referendum on that clause because there is no such a thing and even it there was, the outcome would be obviously known.

With this, I beg to move on the unknown.