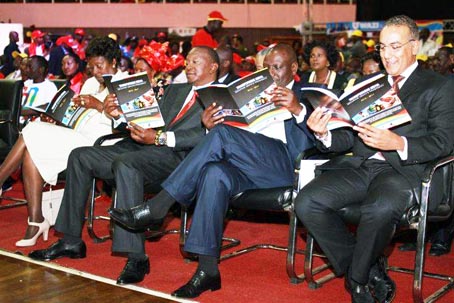 After the pomp and glamour that saw various coalition parties launch glossy manifestoes, we quickly moved on to other issues and forgot any interrogation of the blue prints as it could be in mature democracies.

The Obama message to Kenyans and the developments at the ICC have taken centre stage at the expense of a detailed scrutiny of the promises of the leading presidential contenders. The debate should focus on viability of proposed projects and whether they are realistic or not.

Letâ€™s take Jubilee Coalitionâ€™s manifesto for starters as a classic example; they seem to be promising heaven that will be virtually impossible to deliver.

One would expect the new constitution, equityÂ  and devolution of power to feature prominently, but these are conspicuously missing in manifesto,Â  but instead, they have promised affirmative action to ensure that under-represented and marginalized groups are properly represented in every respect, resettling the IDPâ€™s and ensuring that 30% of all appointees to public bodies and are women.
The jubilee manifesto does not state how they will efficaciously deliver the implementation of the spirit and letter on regional balance in all government appointments as per the new constitution. Promising this through affirmative action is totally deplorable.

Jubilee promises to deliver one fully equipped health centre for every 5 miles radius in the country. If eHealth-Kenya.or.ke today lists a total of 2358 of the Medical Health Centers in the entire nation, how many more will be required to cover every 5 miles in the next 5years in delivering this pledge.

The proposed level 3 facilities are expected to be staffed approximately by 1 physician and 12 Nurses. Therefore, the practical element of fulfilling this pledge does not only face infrastructural challenge but a huge human resource problem to go with it. Can Uhuru really defend this? And where would the funding come from?

The rot in the police force is well document; one would have expected that emphasis on reforming the police could be core, in to have a modern efficient and effective force that will ensure peace in a country ridden by Alshabab terrorists and gun wielding criminals.Â  The Jubilee manifesto offers no mention of the Police reforms. However, top on their list as solutions is provision and the installation of CCTVs in all major cities. How will this enhance security in Barargoi?

On Education: â€˜Every primary school child to be given a solar-powered laptopâ€™

The â€˜solar-powered laptop for every primary schoolâ€™ is another interesting Jubilee manifesto pledge. The idea is wise considering that up until today there are schools in Kenya where standard 1 to 4 have direct access to sun. However, if there are torrential rains or flash floods and the laptops are not waterproofed; the futility of the wisdom of Jubilee Coalition technocrats will be openly exposed.
These are just but a few positive criticisms I have found after a quick perusal of the thick document. I will shortly dispatch my critic of the CORD manifesto.

Running up to the soon to be aired presidential debate, I welcome all patriotic Kenyans to scrutinize the manifestos of all leading contenders for indeed â€˜the devil is the detailsâ€™.

The Author is a Progressive Political Activist in the UK.