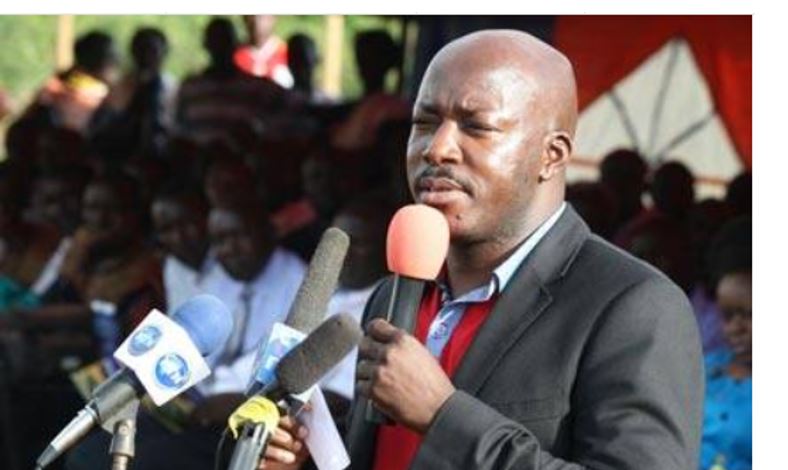 Photo Ken Obura at a past political event.

Who is this man Ken Obura? That was the question that many folks asked themselves when the fresh faced young candidate threw his hat into the ring to duel for the newly carved out Kisumu parliamentary seat.

Few people gave him any chance. His was a long overambitious shot. After all, he was up against previous Member of Parliament and well oiled businessman and wheeler dealer, Reverend Ken Nyagudi and a host of wealthy Kisumu businessmen including Abdul Abdi.

In capturing the ODM ticket for the cosmopolitan constituency, Mr. Obura has confounded pundits and critics alike. ODM is the preferred party in Kisumu and his ascension to parliament, barring anything drastic is given.

What many folks don’t know is that Ken Obura has been in politics for a while now. He honed his skills at the University of Nairobi where he vied for the powerful position of secretary general. He ran an aggressive and flamboyant campaign but owing to the ethnic politics of the University at the time he lost narrowly. In spite of that loss by the narrowest of margins, Ken Obura refused to fade away into oblivion and went ahead to form the official opposition.

The SONU constitution did not provide for an official opposition, technically making Ken Obura’s mission to look like that of a lobby group. That notwithstanding, he had support and his presence was felt. He proceeded to actively check the SONU council especially on issues of transparency and corruption.

Obura did not graduate from the University with a degree in political sciences or other social science course but one in the sciences. He nonetheless retained a keen interest in politics and joined other like minded young luminaries the likes of Jakakimba, Ahmed Papa, Don Bosco, JeffNyamboga, Flavian Kubasu, Mwange Ifedha, Ketta, Sophie Gedo etc etc who founded the Young Kenyans for Raila07, a youth movement that campaigned for the Right Honorable Prime Minister in his presidential bid in 2007.

Folks who know Ken Obura closely will tell you that he is an aggressive, fearless and daring go getter. He is particularly put off and offended by unreasonable, if unnecessary red tape in his pursuits. Like the United States Governor for New Jersey, Chris Christie, Ken Obura is forthright, blunt and likes to speak his mind unfettered by fear or paranoia!

Ask him about his mentor in politics and he will tell you straight away that it is the right Honourable Prime Minister Raila Odinga. Indeed, like the prime minister, the young MP to be generates extreme passions among folks who know him. The late Vice President Michael Christopher Wamalwa Kijana once spoke about Raila Mania and Raila phobia. On the date that he captured the ODM ticket, social blogs were awash with comments that illustrated these points.

Hate him or like him, Ken Obura is a guy that is fun to be with. He has such a sense of humour that an hour long session with him will tickle you so much to leave your ribs aching.

Like his mentor Raila Odinga, the youthful candidate is also an enigma of sorts. He cuts the mien of a playful boy, a fact that may have contributed to his rivals to underrate him. But behind that boyish trait is a calculating, sly and scheming politician with a single minded focus and attention to detail. Another thing that most folks and his rivals may not know is that he began to plan for the Kisumu seat as soon as the constitution was passed.

While folks celebrated the passage of the constitution, Ken Obura scoured the document for opportunities that the new document would present. He spent hours with his friends and advisors strategizing on how to exploit the new opportunities for youth leadership.

Kisumu Central constituency is not just the capital city of the former Nyanza province. It is a business hub for the whole of Western region and is a conduit for trade for the East Africa region owing to its proximity to Uganda and Tanzania.

Kisumu Central has many challenges including unemployment, poverty, disease, lack of capital, the water hyacinth menace among others. In his manifesto, he has indicated that he has the panacea to mitigate these problems. He appreciates that the leadership in Kisumu county must come together to ameliorate the suffering of the masses regardless of Political party affiliation and particularly the youth .

In his campaigns Obura promised to reach out to the yet to be elected governor, senator, other elected representatives, technocrats and the president to be Hon. Raila Odinga who is his personal friend to develop Kisumu.

Does he have the quality to represent Kisumu town Central?

That remains to be seen but signs are that he is up to the task. The youthful alumni of Maranda High School and who calls the University of Nairobi his alma mater is an eloquent and avid debater, a brilliant planner and wise schemer. He is a successful businessman

Having won the hardest duel to win the ODM nominations is a great relief to Ken Obura. He has one foot in the debating chambers of parliament but he must not rest on his laurels. He can continue to consolidate the gains but the reprieve also gives him the chance to join the presidential campaign for the prime minister. That will give him the forum to meet other successful candidates and the prime minister’s henchmen. That will be a good bonding opportunity to obtain useful contacts that will come in handy for him in the noble mission to represent the folks of Kisumu County.