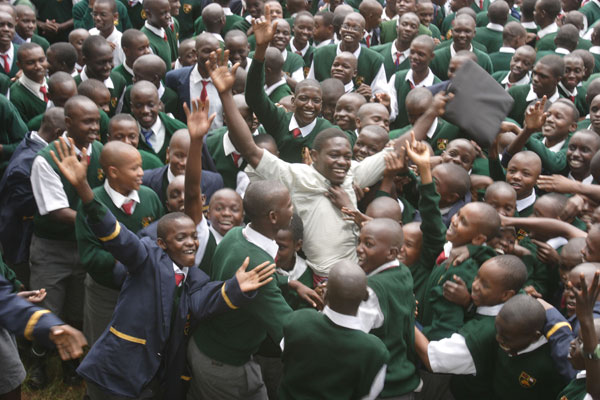 Maranda High School has been taunted by folks who went to schools that rival them in that neighbourhood. The reason Maranda High School and their old boys have become the butt of jokes is that they have not been ranked in the just released K.C.S.E results. They have not been ranked because some 23 students were involved in exam irregularities. That is a eupehemism for cheating. They cheated in computer studies. What is that?

However beyond the unlucky 23 students, the other students posted amazing performances. It is even more amazing that the school enrolled over 400 students. That is almost double the number enrolled by some big national schools. I have no doubt that Maranda High School would have been among the best schools in the country were it not for the Ys.

That said, I am friends with some amazing folks who are alumni of Maranda High School. They say Tinga went to Maranda High. He is amazing, isn’t he. Sammy Muga and intelligence are bed fellows. I respect the dilligence and work ethic of Charles Agwara, Advocate. I know Eng Ochieng Edison McOwino is a terrific and intelligent fellow from the discourse I have had with him on various issues. Hon. Ken Obura is a terrific politician and of course we have Jeff Adero taking KICC to greater heights of excellence.

I mention these individual old boys of Maranda High School because the debate on performance has been hijacked by the schools. It is young hard working individuals who make a name for the school. Never mind that even at Alliance High School which came first, there are possibly some students who did not work as hard as the rest and will not get the University pass mark.

Individuals make schools when they perform well but foremost, they make better life prospects for themselves. It is why some individuals who did not get the privilege to go to privileged schools but worked hard nonetheless have achieved good life prospects for themselves. In this category, yours truly takes the opportunity to blow his trumpet. Yours truly scored exceptionally some thirteen years ago and is now building the nation in his field. Mbara Ochieng Kennedy. I know few folks who are as intelligent as this proud alumni of some school in some dusty village. John Odullah, I salute you. Silas Chepkeres Jakakimba, you have demistified the myth that you have to go to Maranda High School, Kisumu Boys, Maseno, Kanga et al to be anybody. Last but not list, I target my plaudits Jeff Nyamboga, a terrific individual who defied the odds to become a celebrated entrepreneur, accountant and lawyer competing with the best in Europe!

So folks, let us celebrate the individuals more than the schools because it is they who make the school. For parents, let us instill discipline and hard work in our kids. I am so proud of the Nyong’os. Where did Lupita go to school? Perhaps that does not matter any more. All that matters is that she was brought up well. ‘Trained well’ as she would put it. Let us train our kids and younger siblings because wherever they go to school, be it Tonga High School in Gwasi, St. Michael’s Nyandema in Kadem, Gogo in Karachuonyo, Kakiimba Sec. School on Mfangano Island or Maranda in Bondo, they all have a VALID DREAM!