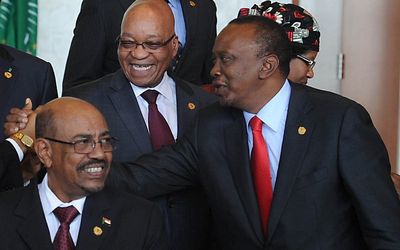 While Uhuru Kenyatta became president of Kenya through a game of treachery including erroneous constitutional interpretation of chapter 6 on integrity to give him and his deputy a clean bill of landing, Kenyatta and Ruto still remain a stigma and an international shame and a global ridicule on our once respected nation and a hub of regional peace.

Uhuru Kenyatta is accused at the International Criminal Court( The ICC) for among other things, crime against humanity, which include the funding of the forceful transfer, circumcision, genocide, destruction of property and many others, while his deputy who faces the same counts is also facing the counts of grabbing IDP property, the issue that the Kenyan courts in their treachery watered down to trespass. Even at that, trespass isa crime punishable by law.

African leaders converge in Washington DC at the invitation of Barack Obama the president of the United States, under the umbrella of US-AFRICA LEADERS SUMMIT on the 4th to the 6th August 2014.

Among the issues to be discussed is trade and investment, democracy and Security. While I have no issues with the 50 African states invited, I remain having issues with the invitation extended to Uhuru Kenyatta on behalf of Kenyans. I at the same time hail the exclusion of Omar El Bashir of Sudan exclusively for his involvement in crime against humanity and his case at the ICC.

While ElBashir and Uhuru Kenyatta are both one and the same, I do not see the qualifications that guarantee Uhuru Kenyatta to attend this prestigious US-African Summit. How will a person accused of crime against his own people, a person who doesn’t believe in a democracy, a person who has divided his people on tribal lines, a dictator worse than any dictators in the world history, be bestowed the honor to attend a summit on behalf of a nation he has so impoverished? The nation he has led with an iron fist….a nation whose democracy he has watered down, a man who has a record of gross violation of freedom of the press? Has Africa, moreso Kenya,lacked men and women of integrity to represent us?

This is not an African Unity Summit. The inclusion of an ICC indictee is an insult on the integrity ofAfrica and the impoverished populace. America believes in democracy and good governance for her people. Wining and dining with violators of the same democracy, indictees of crime against humanity is erroneous. I do not see why ElBashir would not be invited, if Uhuru Kenyatta was. For they are comrades in crime against humanity at the ICC.

Meanwhile, those who believe in human rights and the human rights activists must converge to receive Uhuru Kenyatta at the Washington DC with rotten eggs on his face, to compel him to stop tampering with the evidence at the ICC, and to instead match there and clear his name. It is long overdue. It’s been day and night, innocent innocent innocent, yet he has failed to give justice the space to pursue evidence and exonerate him if he is really innocent. His delayed justice is becoming our global shame. His clearance is long overdue.

The views expressed herein DO NOT NECESSARILY represent those of Kenya-Today.Com.