There is something about journalism ethics that Kenyan media take for granted. Broadcast journalists in this country have turned the screens into catwalk runways showing off their beer bellies, disproportionate hips, perspiring underarms, bean-stalk legs, cow-dung hairstyles, and rodent teeth. With little regard for professional ethical codes of conduct guiding this once noble profession. Take the case of the Awasi sex-for-water story that has roused the rabble this passing week. I never went to the School of Journalism but I do know that one of the principles of journalism is to serve the public interest first. All the attempts to highlight a human interest story of national concern were washed away by Julie Gichuruâ€™s tasteless remarks about a people struggling with the vagaries of life. It was biased. It was done in bad faith.

There is something about our journalism that needs divine intervention. There is no way you can set out on a journey to Awasi town â€“ Kisumu County, crossing Kiambu, Nakuru, Bomet, Kericho Counties with more than one month of preparation, making prior contact with local community gatekeepers, policymakers and affected women, perform background checks on the news subject, to go and do a below 5 minute news item using stereotypical language as catchphrase to drive viewership. If sentimentalism is what Citizen wants to thrive on, I am of the opinion that they rebrand to a gutter media organisation and focus on showing pornographic content and garbage news items. At least the few Kenyans who still watch prime time news would make a wise choice given the prior information at hand.

I am speaking about Citizen who loves making fun of the people of Nyando. They love that place, it is the bedrock of comic relief. Before the Awasi sex-for-water clip, there is this woman whose belongings were swept away by River Nyando floods Willis Raburu loves making fun of. The one of â€œSerikali Saidiaâ€ infamy. If you want to know why I stopped watching prime-time television, my stomach kept churning with rage watching a reputable media house make a mockery of a vulnerable womanâ€™s predicament. They have remixed that desperate cry into fun to attract viewership. As if that isnâ€™t enough, last time a team travelled back to Nyando to undress the Awasi people and make fun of their predicaments. Julie Gichuru, of all the women media personalities, asked the people of Luo Nyanza to stop making noise about the referendum and ask their leaders to serve them.

I donâ€™t know which journalism curriculum Julie Gichuru went through, but I do know she never adhered to the following basic guiding principles;

(a) They shall report and interpret the news with scrupulous honesty by striving to disclose all essential facts and by not suppressing relevant, available facts or distorting by wrong or improper emphasis.

(b) They shall not place unnecessary emphasis on gender, race, sexual preference, religious belief, marital status or physical or mental disability.

(c) They shall do their utmost to correct any published or broadcast information found to be harmfully inaccurate.

Lets begin with (a) above.

â€œThey shall report and interpret the news with scrupulous honesty by striving to disclose all essential facts and by not suppressing relevant, available facts or distorting by wrong or improper emphasis.â€

I have replayed that clip a million times. Nowhere is any mention of the efforts the Nyando political class have made to address the water problem that is the subject of that news item. Citizen wanted to show the world that all the Luo people are preoccupied with is disturbing Uhuru Kenyattaâ€™s Kikuyu government and nothing else. I love that Julie Gichuru played the tribal card, because nothing else appeals to the emotions of viewers other than reminding them that if you donâ€™t cooperate with Uhuru Kenyatta you are bound to sell sex and die of AIDS while Kikuyus are busy stroking the belly of their anointed son and belching all the way to the granary. It sells, all the time. Regardless of whether you wear pancake makeup or wash your face with soap jelly.

There was no attempt whatsoever by Citizen TV to do a background check on the history of water scarcity in the area. No attempt was made whatsoever to speak to the area representatives on what steps they have made to follow up on the water projects initiated in Nyando. No attempt whatsoever to ask the water vendors where they get their water from as opposed to the women walking to the River. They set out to Awasi with one agenda â€“ to gather another clip that will put the Luo in their rightful place, the place where successive governments have always put them. The place of suffering loudmouths. 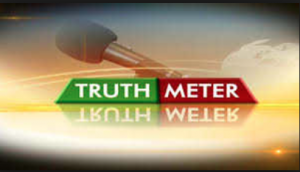 Julie Gichuru can give all the excuses in the world to absolve herself of blame. She not only disparaged the Luo community in general but also stripped the dignity of the women of Awasi, in particular. And Citizen can take that clip and make fun of it in their weekly humour section of #Truthmeter all they want, because that is all they are famous for â€“ making fun of peopleâ€™s misfortunes. And they can call that Awasi mama and make a remix out of this sex-for-water and play it for times on end, make money out of it, and laugh all the way to the bank. I also expect her to go to Murangâ€™a and interview jigger-infested Kikuyu sufferers. If equity in news coverage is to be observed, it is only fair that the grey-haired octogenarians of Kilifi who are being lynched by locals be made fun of and record remixes at #Truthmeter producshizzle, the witches of Kisii being torched indiscriminately must also be included in that album.

Lets make fun of the downtrodden, letâ€™s blame them for their surnames, letâ€™s show them how stupid they are. Because we are supposed to live off their suffering to earn big bucks. There is a reason why the media sets the news agenda. If they decide that theirs is to mock the weak, we shall have no choice but to ask them to keep Luo Nyanza out of their coverage. We are better off with a media blackout than a stereotypical, ethnic-laden, socialite media houses. My people deserve respect, na si tafadhali.