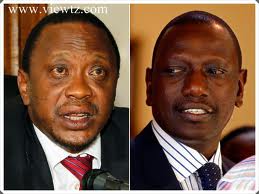 Heads are rolling at the Jubilee campaign secretariat. Announcements to fire top Jubilee strategists and managers are being prepared with a press conference scheduled for early next week. Uhuru rather than acknowledge his poor leadership, is shifting the blame to his campaign team which has been struggling to match Railaâ€™s tech campaign juggernaut.

The strategists are blamed for giving wrong advice on the Obama message saga that saw Uhuru issue a statement welcoming Obamaâ€™s remarks. Uhuru at a rally in Turkana exuded confidence that there will be no sanctions contrary to his position that Kenya can prosper by trading with China. More than five powerful trading partners including France, USA, Britain and Switzerland have confirmed sanctions if ICC accused are elected.

It is not lost to many that the French Navy off the Somali Coast were crucial in the Kenya Defence Forces march into Kismayu last year, USA and Britain provided massive logistical support to KDF. With Sanctions fear of Alshaabab roaming large and taking over the city is not an exaggeration.

Thanks to the histrionic and narcissistic Mutahi Ngunyiâ€™s reckless remarks that â€œthe west can go ahead and prepare the sanctions packageâ€ the West is now up in arms in affirming the long held belief that sanctions are a horse in this election. Â The French, the British, EU, the Switz, US etc are on Jubileeâ€™s case for fronting a candidate they canâ€™t do business with.Â  And they warn a round of sanctions. They donâ€™t want to, but they wonâ€™t have a choice.

Ngunyi ever since being fired as a columnist by Nation due to wrong predictions has been a man in pursuit of hand-outs, Uhuru akirusha mifupa, anatafuna . He is a man attempting to shoddily re-invent his relevance by now doing Uhuruâ€™s bid. He also uses dummy names in online tabloid blogs, Facebook and Twitter to besmirch anything but Uhuru. I will soon disclose his dummy name.

An intellectual prostitute, he mislead Statehouse insiders that Mudavadiâ€™s was a viable candidature, with a sole intention of dividing the non-Gema vote as confirmed by his shoddy PowerPoint presentation which was intended to be sugar, but turned out to be poisoned chalice for Uhuruâ€™s campaign even after being paid 2 million.

It has boomeranged. Its only premise is that Mudavadi divides the CORD vote, and that the 2 big tribes trump the rest of Kenya in voter numbers. Itâ€™s obvious the Kalenjin vote will be shared 60:40, due to Achicha rebellion. We the Luhyas, are CORDed to the bone, because as Ngunyi said, a vote for Mudavadi is a vote for Uhuru. And after chasing our son, we canâ€™t stand Uhuru, full stop.

Ngunyiâ€™s tribalism lies have been questioned by even IEBC chairman who wondered how one can estimate tribal voter numbers when IEBC didnâ€™t use tribe as the basis of registration. In a Citizen TV debate, TNA chairman Sakaja sounded intellectually wanting in his defense of the indefensible shoddy work by Ngunyi.

Thanks to Ngunyi, the Jubilee campaign secretariat is now in disarray, finger pointing over who brought them into this fox-hole, a predicament that has seen them trail in every opinion poll conducted by multiple polling agents.

Right now the hi-tech 72 hour CORDâ€™s internal tracking poll I delved into in the article https://www.kenya-today.com/opinion/raila-odinga-campaign-secretariat-2013 shows that the minority tribes are more galvanized behind CORD, a coalition of Safari ants army of minorities who constitute 65% of the country is now solidifying, which means voter turnout will be huge in the non-Jubilee zones, and Raila would mop up much of that vote.

Ngunyiâ€™s shoddy work reignited embers of nationhood among the safari ants- millions of them who will be lined up behind Odinga and not the big tribal chiefs, that Ngunyi in his Tyranny of Numbers averred can dictate to Kenyans with disregard to the safari ant army of minorities. Ngunyi forgets Moi floored Kibaki twice, because of this conglomeration of the safari ants.

It is a well known fact that top TNA strategists commissioned the Mutahi Ngunyiâ€™s political wet dream. Their problem is that CORD has consolidated the perception that it is the winning coalition, and this has been confirmed by every credible opinion poll. The greatest headache for Jubilee has been how to deliver a winning opinion poll.

Smart Octopus came, and the public was like â€œfrom the scary name Octopus to the deep accented presenter was seedyâ€- sounded like a greedy commercial enterprise out to get a slice of the 10 billion shilling Jubilee campaign budget. Smart Octopus is not even registered though with a temporarily office in River-road.

One of the key tenets of polling science is reproducibility, because if different polls can reproduce same results that Raila is leading, then it only confirms the unthinkable to TNA/Jubilee- That Raila is leading and that the methodologies employed thereof are objective.

As Obama would tell you when he tried to run for State House Senator in Illinois for the first time, name recognition is important in politics. That is why branding is important. Itâ€™s why Moi lead in elections, followed by Kibaki, and after Moi, Kibaki followed as president. It boils down to name recognition.

Railaâ€™s name has had the most media mentions, and since Kibaki Tosha declaration, he has consistently been on the winning side, testament to his good judgment and insight, which are key tenets in leadership.

Railaâ€™s name is therefore a household brand, from the skycrappers in Nairobi, to the Manyattas in Maasai homesteads.Â  This is why he is leading and will win the election. His is the unrivalled name recognition of the most popular man alive in Kenya today.

Some URP strategists are not in talking terms with their TNA counterparts due to the troubles befalling Jubilee. URP is blaming TNA for CORDâ€™s continued gaining of ground in Kalenjin land.

Delayed cash processing for URP activities in Rift Valley TNA secretariat, Ngunyiâ€™s shoddy work, which even Wakili Murkomen as a Political analyst finds silly, and the sidelining of URP strategists by TNA are some of the grievances over which top URP and TNA strategists are not in talking terms.

URP strategists believe that TNA side has been making miscalculated decisions. And URP teamâ€™s persistence and noise to Uhuru has gotten Uhuru to now say enough is enough, with the infighting.Â  Rumor has heads are scheduled to roll come next week.

Onyango Oloo is said to be a lonely man being watched closely by Machel Â Waikenda who discharges most of Olooâ€™s job due to suspicion he is an ODM mole who has been misleading Uhuruâ€™s decisions, so that Raila can squeak through.

The ping pong blame game goes on and on. Meanwhile Cord secretariat continues to display a strong and unified campaign machine that is engineering a Tsunami like political wave that will sweep all the dirt to the ocean.

With 3 week to the election and Uhuru trailing, how Uhuruâ€™s to be announced new campaign team will catch up with CORDâ€™s well educated, sophisticated, tech-savvy dedicated, constituted and gelled campaign team and machinery is not known.