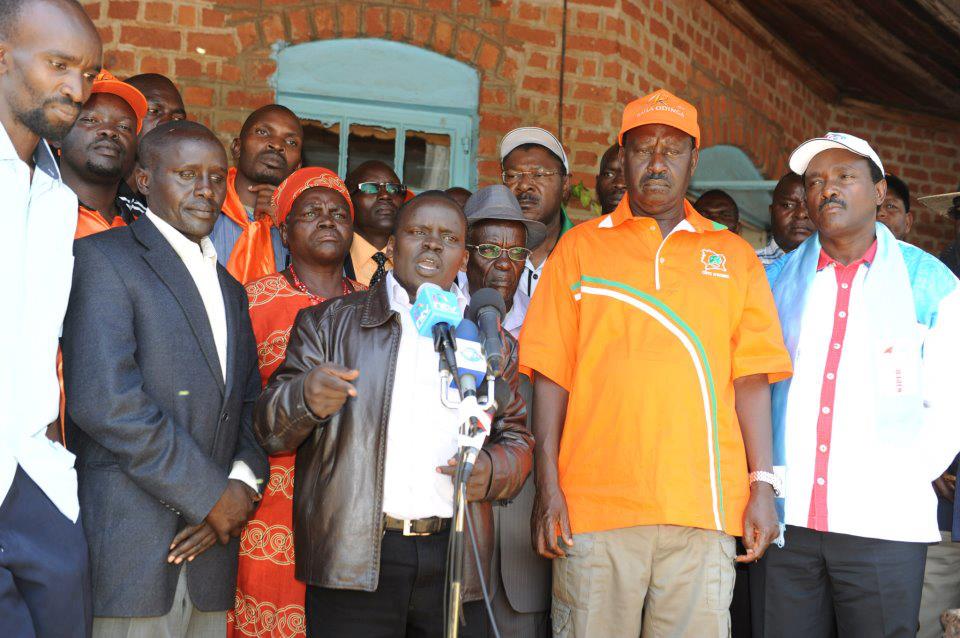 Who is Joshua Arap Sang? For many people, he gained either fame or notoriety, depending on which side of the political divide you belong to, when he was charged for crimes against humanity at the International Criminal Court, alongside better known Kenyans.

Before then, he was a popular radio presenter at the vernacular radio station that broadcasts in the Kalenjin language, Kass fm. While listeners to Kass fm were familiar with his voice, The Hague court brought the images of a short dark man of medium built to our living rooms of other Kenyans.

After the acquittal of the veteran politician, Henry Kosgey, Sang and Ruto are the remaining only ICC indictees from the Raila Odinga side of the coalition government.

And now again Sang has come to the limelight, this time not for ICC related issues but to debunk the myth and dispel the rumour that it was Raila Odinga who had orchestrated their problems at the ICC.

Sang is not a politician. He is an indictee of the Hague court just like Ruto, Uhuru and Muthaura. That makes him believable and even an authority on matters ICC. Through his counsel Sang has read, seen and listened to all the incriminating evidence, and so when he says the case was a set up by the Mt Kenya elite, that should be gospel truth!

Political observers will realize that since Joshua Sang came out to exonerate Raila from accusations that he orchestrated the tribulations of the Oâ€™campo six, now Bensouda Four, neither the Jubilee coalition nor William Ruto has come forward to respond to him!

What else did Sang say and what are the effects of his revelations?

Other than disclosing that Raila was innocent on the accusations that he took anyone to the ICC, Joshua arap Sang also stated that the true culprits were in the PNU side, to which Uhuru belonged. He added that the problem of historical injustices, especially those related to land was most prominent in the Rift Valley and it was unlikely that Uhuru would be neutral referee or arbiter to deal with it decisively.

Joshua arap Sang is not a politician. He is not in any direct contest with Ruto for any political seat or interest. But Sang has a massive platform and an influential one at that: he is a radio personality. He has a huge loyal audience who listen to him- more powerful than Caroline Mutoko and Maina Kageni combined otherwise why could the Kibaki regime set him up to the ICC case. He is eloquent, articulate and persuasive.Â He is believable and, he says he is speaking from his heart, from his conscience. Sang is speaking out his convictions! and its resonating well with the Kalenjin masses.

And the Kalenjins are listening. Keenly! The ground is becoming increasingly volatile by the day. All this, with a few days to the general elections.

To be fair, it is not completely true to state that Sangâ€™s revelations were completely surprising. The Kelenjin all along knew the accusations against the Prime Minister were propaganda. Propaganda is allowed in politics, and the Kalenjin community would not have minded propaganda against the Prime minister if it is designed to advance the political progress of one of their own; William Ruto. The Kalenjins love Ruto; he is pragmatic and a mobilizer. Like Sang, he is eloquent and articulate. He is a machievallian!Â  Would it be safe to say that while Sang represents the conscience of the Kalenjin, Ruto is their political face?

Rutoâ€™s Â initial decision to run for the presidency resonated well with the Kalenjin populace. They even advanced some math, even if implausible and remote that he could come second in the first round of the presidential contest and pull a miracle in any run off. To be honest, the Kalenjin donâ€™t necessarily crave for the presidency just yet. Until just about ten years ago, Daniel Moi, a Kalenjin had been president for two and a half decades. The Kalenjin were just content without one of their own being president, even if that ran counter to Rutoâ€™s personal ambitions.

They were content for Ruto to build a political base gradually. Our multi party political experience shows that the person, who eventually became president for example Kibaki or built an almost national constituency like Raila, did it over time. Raila has run for the presidency twice before. Kibaki ran twice before clinching it at the third attempt. There was nothing wrong for Ruto to bid his time.

The Kalenjin were quite unhappy that Ruto denied them a chance to vote for him, to build him gradually for the national office some day. If he had run, he would have given them a chance to vote for arap Mibei, a man they are fond of, in the second round. By voting Ruto in the first round and giving the ballot to Raila in the second round, the Kalenjin would have killed two birds with one stone.

It is these issues that have been simmering in the mind of the Kalenjin in the streets. It has been festering like a swollen wound and through arap Sang; it has found an avenue to burst out. And it is bursting out with a bang!

What the Kalenjin elders and professionals are saying is that they love Ruto. He has been a voice to them. He is charismatic; he has a political future and they are happy for him. They would like to nurture him, like a child, for greater things to come. But like a loving parent nurturing his child, there is a time for tough love in the form of disciplinary measure, when the child displays truancy. Ruto has displayed political truancy. He strayed from the Kalenjin political script and they are going to show him tough love by voting Raila Odinga on 4th March, 2013!