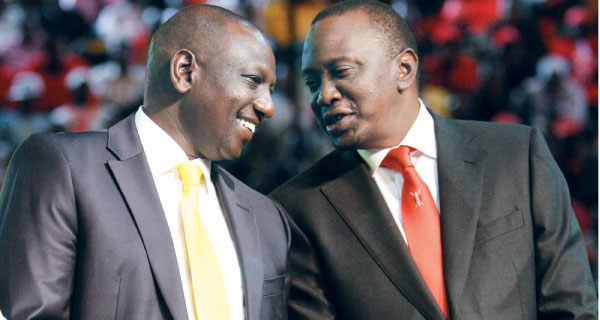 By John Githongo for the Star

Kenya celebrated its 50th anniversary as an independent country last month. I was struck by how low-key it was considering the scale of the milestone.

This was partly because of Nelson Mandelaâ€™s death and subsequent funeral. It isnâ€™t in the best of taste to throw too big a party when the continent is mourning its most respected and beloved son.

However, it is also the case that the past nine months since the Jubilee coalition controversially won the election have been challenging ones.

The swagger and hubris of May to September has been somewhat tempered. One simple reason for this is that it is easier to run a campaign than a government; especially a government that you know contains within it a massive bloc of officials whose resentment of you is virulent and seethes below the surface.

Thus it is that those who were thumping their chests in May today plead to be given time to deliver; for the public to cut them some slack as they grapple with multiple governance challenges.

That has not, however, tempered the hubris of commercial types unable to smell the political coffee, who continue to believe that Kenya can grow its way out of its unresolved fundamental political contradictions.

This administration has emerged to be an alliance between the Gikuyu and Kalenjin elites, their followers and the corporate sector narrowly defined.

The youthful Nandi Hills MP, Alfred Keter, has been persistent in warning Deputy President William Ruto essentially that â€˜the Gikuyu are out to use and dumpâ€™ the Kalenjin in the political alliance that is Jubilee.

While there are some observers who have dismissed this as the mere posturing of coalition partners grumbling that they arenâ€™t being allowed to â€˜eatâ€™ enough (partly true), others have argued its indicative of a deeper malaise among the Kalenjin vis-Ã -vis their already totally unlikely and deeply uncomfortable political marriage. I tend towards the former view.

The allianceâ€™s durability is heavily dependent on impunity with regard to grand corruption. The more the pigs can gorge themselves at the trough, the less whining one will hear out of this regime.

Political events have a habit of knocking the wind out of the sails of a new administration. Then again, the statements of key government officials regarding issues like the ICC and security in particular have been so beyond the pale they have alarmed even Jubileeâ€™s sympathisers. The lies have been so transparent that they have left many observers confused.

The Westgate saga in September, for example, saw the reputation of Interior Cabinet Secretary Joseph ole Lenku take a battering.

But even this damage might have been better contained had it not occurred in a context where the youthful â€œdigitalâ€ regime was battling significant challenges on multiple fronts, some of them self-made. Its credibility was first dealt a massive blow by what the kindest of critics might term the incompetence of the electoral body, followed by a Supreme Court judgement that left significant swathes of the country disgruntled and unconvinced about the legitimacy of its mandate.

Distracted by the â€œpersonal challengesâ€ of its top leadership in the form of the ICC, it further lost opportunity after opportunity to unite the country behind its ambitious agenda, so much so that the nationâ€™s Golden Jubilee celebrations were marked nationwide, particularly outside Nairobi, by more ambivalence than celebration.

The scale of NARCâ€™s victory in 2002 and the diversity of the coalition in those in â€˜pre-tyranny of numbersâ€™ days were such that Kenyans allowed the Kibaki administration massive political leeway.

Blunders were excused and even delays in implementing promises were met â€“ at least initially â€“ with public patience and understanding.

Even when the President was taken ill, and a fatal air crash injured and killed some of his ministers early in his tenure, despite the start of squabbles within the coalition over the infamous MOU that was never honoured, the nation was still willing to allow the Kibaki regime time and space to implement the series of significant policy reforms it had promised.

To be fair, Kibaki came to power in radically different circumstances and on the back of a political machine much of which had considerable social capital having spent two decades in opposition.

It was a time of great hope, even for those who had voted for his rival. Despite the fact that Kibaki himself and several of the most influential of his officials had spent most of their professional lives in government rather than outside it, the new regime was perceived as pro-reform.

It rode on the credentials of those who had consistently fought for political transformation for much longer, paying dearly for their defiance and activism in honing a post-Moi change agenda. It is worth remembering, in contrast, that in the latter part of those years of struggle, Kenyaâ€™s fourth president Uhuru Kenyatta and his deputy William Ruto were in KANU proper.

Ruto first became a household name in Kenya in association with KANUâ€™s notorious youth wing, Youth for KANU â€™92. As for Kenyatta, no less than Moiâ€™s chosen heir, it might have taken ten years to bring the second presidentâ€™s dream to fruition, but clearly he is on track now to carry out his mandate to extend the Moi era for, as he himself pointed out recently, another twenty years.

JUBILEE: THE HONEYMOON THAT NEVER WAS

Nine months since they came to power, Uhuru and Ruto do not seem to have been granted such a grace period. Their honeymoon with Kenyans – if there ever was one – was the most short-lived in Kenyan history. As a result, from the get-go even simple problems have deteriorated into crises.

The confrontational aggression that characterised the elections right through to the swearing-in of the new Executive has spilled over into the everyday; everything it does is contested. We have, for example, seen multiple events of industrial unrest among entire groups of public servants such as teachers and medical professionals.

We watched our main airportâ€™s arrivals terminal burn down and Senator Mutula Kilonzo die in circumstances that still remain unclear.

Of all the changes anticipated by the constitution, security sector reform has been the slowest and most vexatious. The terrorist attack on Westgate Mall in September was so incompetently handled that it left the reputation of the Kenya Defence Forces (KDF) badly dented and government officials looking confused and inept.

Then, across the country, an apparent collapse in security, combined with the messiness of the transition into devolution has seen deadly violence break out in Tana River, Mandera, Moyale, Bungoma, Trans Nzoia, Mombasa and other counties. Just as troubling, the police seemed unable to unravel the mystery of a bloodied and recently decapitated human head dumped outside the National Police Service Commission offices with a message to the Chair of that Commission on it.

The current police vetting exercise has raised more questions than answers; not only has the public been flabbergasted by the secrets that have come spilling out, the critical issues of the timing of the exercise and the sensitivities of demobilizing even a section of any disciplined force do not seem to have been prepared for.

Hence the anxieties that prompted a prophecy of a dire future for officers so publicly exposed as dishonourably retired, with no prior discussion as to livelihood and security options.

The regimeâ€™s response to growing articulation of public dis-ease has been to aggressively move to contract democratic space leading to brazen attempts to muzzle the media, manage civil society and generally exhibit a political thin skin that has been surprising, exhibiting intolerance to criticism that harks back to the 1980s.

The unapologetic ethnic insensitivity with regard to public appointments, and the defiant attitude with which criticism has been fended off, seems to be a calculated message dismissing as inconsequential and petty all those who question the regime. And then there has been the rather unusual development in the form of an unexpected article by the Presidentâ€™s speechwriter, Eric Ngâ€™eno, complaining about sabotage by old-school bureaucrats in the system.

The last time a relatively junior official railed against colleagues above his pay grade with such confidence was in 1983, during the Moi era, when the then chief inspector of motor vehicles, Kuria Kanyingi, went on the offensive with the â€˜traitorâ€™ narrative. History reminds us that this was concocted to remove the then powerful minister Charles Njonjo from public service in a manner that also ended his political career.

The general feeling of many observers is that there was no way Ngâ€™eno could have been speaking for himself; the bets are on that he has clearly been given the nod to cry wolf loudly and wring his hands wildly for the public. Some have argued that he is simply laying the ground for a coming purge of the civil service.

Others speculate that internal contradictions within the coalition forged by the ICC are beginning to cause a very public fraying at the political edges, an opinion that is gaining currency with the repeated amplification of dis-ease alluded to earlier, led by the relatively junior first-time member of the national assembly, Alfred Keter.

The Executive has fast-tracked all manner of economic projects while the grand political one of nation-building seems to have been parked for a while.

Whatever happens at the Hague, the ICC process will change this order of priorities. At the end of the day, Kenyans are beginning to come to terms with the fact that the 2007/8 post-election violence and other atrocities that have helped define the most powerful resentments in our society will ultimately require a comprehensive political solution for true closure to be found.

Dishing out cash and title deeds wonâ€™t cut it, nor will rewarding sycophancy and political support at the expense of national unity. In this sense, it is a crying shame that the Bethwell Kiplagat – led Truth and Reconciliation Commission was still-born.

Kenya doesnâ€™t have an Archbishop Desmond Tutu, Still, one prays that ultimately someone that the political elite will actually listen to – our religious leaders perhaps – will have the wisdom and courage to speak the truth to power and the selflessness to do whatever it takes to bring about true reconciliation in Kenya.