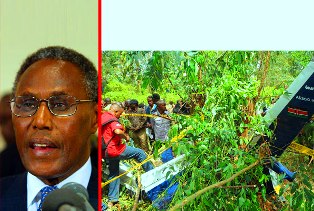 Mohamed Ali to me easily passes as the journalist groomed and made for Africa. To begin with his enthusiasm is infectious, his passion for investigative journalism is disarming and above he is a petite ball of energy.

But wait a minute, journalism and politics are twins. They supplement each other with no much certainty on which actually breast- feeds or suckles the other.

Journalism to most of us is a divine calling, its more than standing in front of a camera and mumbling some words that fuse vagueness and pomposity. It is not a conventional course it a religious undertaking.

Is the timing meant to energize the â€œmove on campaignâ€? Is there anything that informed the decision to air it just on the eve of the so called inauguration which lacks significance among the bigger percentage of populace?

Is it another grain in the greater scheme played by our local media to change raging public debate on governance and the just concluded election?

Iâ€™m not pouring scorn on the findings of this rare and informative work done by this genius of our time. But we must learn to discern interpretative facts from truthful facts, intended meaning from designated meaning.

The intended meaning of the Jicho Pevu thing is more than what actually meets the eye. Boldness is what differentiates a failed leadership and a staggering concoction of balkanized majority from minority region. Ali could have been bold enough to release the piece when it was most needed as timing still to me has watered down the message.

They are still moving on Ali, and youâ€™ve assisted them to echo their moving on campaign even with such glaring impunity at the national union of twoâ€™s.

True to Stephen L Carter words, integrity is like the weather; everybody talks about it but nobody knows what to do about it.