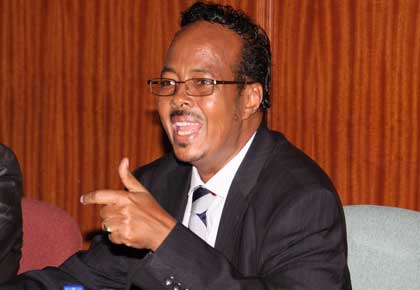 Jail Me For Flying My Country’s Flag? Oh Really?
Reducing things to absurdity, that’s it.
BY DIKEMBE DISEMBE
As I grew up from childhood a decade ago in a village in South Nyanza, nothing can be so memorable than the school assembly days. The teachers of that generation had managed to introduce certain compulsory activities at school, like bringing them dry firewood, slashing around their houses, tending their gardens, harvesting their crops, fetching them water, washing their utensils, and when their houses were not sparkling shape- smearing with cow dung etc.

Using cow dung to smear teachers’ houses! I can see my “urban” friends making jokes about this. If you were so lucky as to be raised with cerelac and diappers, Tv and electricity; daddy and mummy; thank your mother and father, some of us first read these things in books. It was always educative reading about Mrs Kamau’s family and children – Tom, Mary and Peter (by then we did not know Mrs Kamau was a Kikuyu) – and their ‘beanbags’. Poverty, which was communal, made learning a privilege.

The beauty of growing up in the village was punctuated with these crazy rules and outlandish laws. That was the era of corporal punishment. No day was perfect for corporal punishment than on ‘assembly days’- the mornings of Fridays and Mondays.

But on Mondays and Fridays, some good things also happened. Things like when a “bad teacher” had been transferred to another school, or when the DEO would be coming to visit; or the school milk was being distributed, or when the FLAG was being hoisted!The hoisting of the flag!

The hoisting of our country’s flag, in my school, was reserved for the brightest pupils. If you could touch the flag, you were uniquely gifted. I was gifted but had one other problem: I could not do the drills. It took me long to know my left from my right; which made me useless in so far as scout trooping was concerned. From std. 1 through to std. 5, I always confused my left-right sides. The scouts teacher summarily dismissed me from ever trying to be a scout, which meant I would never be a policeman which meant eventually that I had to work hard to be something else, looks like i am succeeding! But do I say!

Be that as it may, I developed a lot of respect for both the flag and the scouts. My family then emigrated to a town-setting, thoroughly interfering with my village experiences. In town, interestingly, the scouts were not as bright as the village boys. I saw nothing special in them save for the sophistication and the shouting which accompanied the raising and lowering the flag. Their drills were more confusing- apart from the left-right turns, they added an about-turn, which made the whole thing scary. I tried for a while to rejoin the scouts but abandoned the whole thing. I concluded the teacher who had dismissed me from scouting may have done a permanent damage to the part of being which needed nurturing to make me a great future soldier.

First forward to now and an MP has just drafted a bill in parliament that seeks to jail people found “flying” the national flag. How selfish can people be? In a country were political pettiness is legendary, this law beats allthe others.

My friends the national flag should not be used in exclusivity. Last month after visiting an electoral agency of the state of Ohio, the electoral officials gave us as gifts little flags of the United States! In homes, hospitals, churches, bars, courts, large farms, supermarkets, recreational parks and cemeteries, the people of the united states live by the flag of the United States. They go to war to defend the flag of the united states. In every meeting we attended where public servants were deliberating on community issues, they first face the flag and swear by it.

Then you jet back home and find a useless Mp by the name Aden Keynan banning the use of the national flag. You find governors begging to use the flag. SHIT!

If THEIR Kenyan flag will land me in jail; I will use MY American flag – the star sprangled banner!