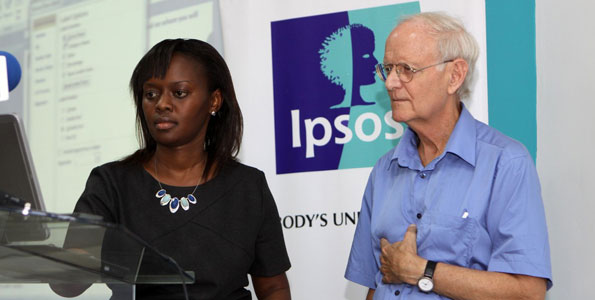 The ongoing “pang’ang’a” about who won the debate isnâ€™t what’s important, what is significant is the elitism in the wordsâ€those who watch TVâ€.

One of my degrees is in a Science based discipline, and I can tell you that basing sampling on those who watch TV is absolutely lacking in scientific basis. Only in a cable based environment can you truly tell how many watched TV. Did you factor in the demographic composition? How was the sample picked? And within how long after they had watched TV did you conduct the poll?

In CNN they assemble a group whose demographics represent the diversity of the American people in a room. In a room because, you want such an environment controlled. You want them to not be contaminated by partsan media for the case of Kenya this could be like media propaganda spewed by Uhuruâ€™s K-24 TV.

If you interview people after two (2) days of watching Uhuru owned channels, and media houses, several of them, would be indoctrinated through pro-Uhuru adverts in between, that there can only be one outcome, an Uhuru win in the debate. Such are not credible interviewees.

If that survey was truly done (which I highly doubt) and those were indeed the results, then it would only mean one thing. That Central Kenya has more TV-owning households, is testament to favoritism, and tribalism that has for long bedeviled this country. Itâ€™s the trickledown effect of cabinets that are 60% the Presidents community. That is what we need to fix.

And what would that mean? That the region that has produced 2 out of 3 former presidents is doing better the rest of the nation. They can afford more TVs. That is what it means. And that now they are showing that off to the less to do regions that have never produced presidents, by lacing it up with well crafted and cooked up polls- by commissioning polls that confirm nothing else other than TNA strongholds have more TVs.

We expected the debate to be a source of rejuvenating of our nationhood, but too sad it turns out itâ€™s a source of spitting at the misery of the strongholds that donâ€™t produce presidents. It is dangerous politics that will take our nation in a bad route when the wounds of 2007/8 havenâ€™t even healed. This coming after Mutahi Ngunyiâ€™s tribal arithmetic beamed on television across Kenya, is dangerous politics. Am saddened at this height of irresponsible political brinkmanship.

I find the polls methodology of the post-debate polling wanting and bankrupt in polling science. I hear the echoes of a candidate who has consistently trailed in opinion polls, re-inventing opinion polling science, to find new ways of having a few polls however unscientific they are to make him look like he is leading. We saw it with the deep accented presentation by OCTOPUS.

It is these counter-measures that make you believe that Raila is indeed the leading candidate. Itâ€™s the desperation of a campaign team that has given up on credible international best practice of polling science, and has chosen the dark route of polling brinkmanship. Like singer-song writers sitting down and cooking up numbers. So sad.