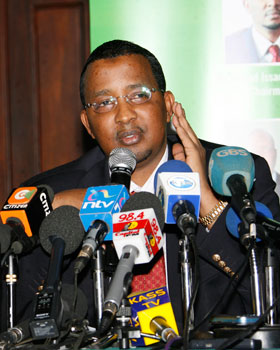 The assassination of an election adjudicator is among the highest-profile acts of political violence, and conventional wisdom holds that such events often has substantial political, social, and economic effects on a country.
TheÂ  breaking news earlier this week that the administration police officers attached to IEBC Chairman Issack Hassan were shot at in his official vehicle by police in Hardy, Karen under unclear circumstances is seriously alarming.

Is Hassanâ€™s Life in Danger?
It is reported that both the police forces [police and AP] were aware of the impending attack on Mr. Hassan life.Â  The four AP officers shot at in Hassanâ€™s official car by the police from Hardy Police Station are said to have been officers redeployed from Security of Government Buildings (SGB) Uhuruâ€™s camp as reinforcement to their two colleagues guarding Hassanâ€™s residence.
The perceived â€˜communication mishapâ€™ between these two police forces geared with the best walkie-talkies and wireless phones points towards the hands of â€˜some dark forcesâ€™.

Consequences:
The possible consequences could be very serious because if we are to investigate the full extent to which Hassanâ€™s assassination ahead of the polls would cause political instability to Kenya as a nation, the incident will be treated differently.
With the political tension that is thickly saturating the nation following the emotive campaigns touching on land and ethnicity, the assassination of the polls chief would inevitably lead to a political unrest or a civil war.
The reason for this is because in such past cases internationally; there is an interactive relationship among assassination, leadership succession, and political turmoil: in particular, we find that assassination’s effects on political instability greatest in systems in which the process of leadership succession is of a pioneering new constitutional era.

Instability, Political Unrest, Civil-War e.t.c
In the event of a successful assassination attempt on Hassanâ€™s life, the nation will be pushed back to the brink of precipice of the last Post Elections Violence in 2007 and wanainchi will be freshly starring at the abyss once again.Â  The uncertainty that gripped Kenya during political assassinations of JM Karuki,Tom Mboya and Robert Ouko will be revisited but only nowÂ  compounded by the fresh memories of the existing Internally Displaced Persons [IDPs] from the last PEV.
It will be prudent for the government to move swiftly in completing the full investigation of the incident in Karen earlier this week and issue a statement immediately to reassure the nation.