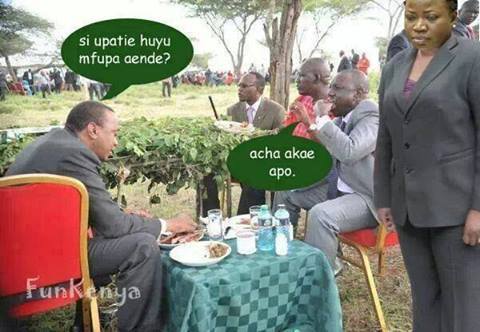 Some times, and those times are many, I have been left with this wonderful feeling that we Kenyans are the greatest and most wonderful people in this continent. A president sits down to devour nyama choma with his deputy and you, “hungry, salivating but happy”, cheers on.

On the other side, a sh.1 billion home (foundation) is being erected on a hillside overlooking one of the most poverty stricken cities in this hemisphere and you, “hungry, salivating but happy”, cheers on. The only difference is that the ‘you’ in the former and the ‘you’ in the latter are politically, geographically and socially ‘worlds the same but worlds apart’. The similarity: both are “hungry, salivating but happy”.

As I thought about it, wandering in this great society utopia, I found it befitting to share with you, friends, one of the greatest propositions ever put for universal education. By education, friends, I don’t here mean the pedagogical machine that feeds us to the kindergaten teacher at year one and churns us out with a ‘Prof’ or ‘Dr’ designation years later.

I mean, friends, that other education. . .the one that gives you the ability to see what games are being played and what position you must occupy. I mean education as that greatest ‘equalizer of the conditions of men’.

“Now surely nothing but universal education can counter-work this tendency to the domination of capital and the servility of labor. If one class possesses all the wealth and the education, while the residue of society is ignorant and poor, it matters not by what name the relation between them may be called: the latter, in fact and in truth, will be the servile dependents and subjects of the former.

But, if education be equally diffused, it will draw property after it by the strongest of all attractions; for such a thing never did happen, and never can happen, as that an intelligent and practical body of men should be permanently poor. Property and labor in different classes are essentially antagonistic; but property and labor in the same class are essentially fraternal”.