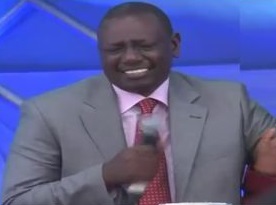 In the previous part I discussed Borderline Personality and related that to why I suspect Ruto has that disease! Join me for Part 2.

Now over to Ruto, and parallels with the story in Part 1.

First of all I am a single born again Christian. Thatâ€™s why it irks, irritates and annoys me when Ruto has lately resorted to annoyingly crying in every public function to control Kenyan’s emotions. Itâ€™s about attention and control and this maladjustment and bad habit has to stop.

Ruto has to find better ways to deal with his guilt of living contradictory lifestyles. Salvation/purity vs being involved in major corruption scandals. Ruto is living a double life. Caught between ruthlessness of politics and worldly Riches, and holiness of Christianity. We must engage in this theological debate. This Davidian contradiction or is it Solomonian?

Ruto wants to taradiddle and hoodwink Kenyans into thinking that because he cries, he is a man who feels sorry for their poverty and suffering, and while actually, he is part and parcel of their problem as evidenced by the jet scandal.Â

Kenyans sweat their butts off lining up for matatus, and while it takes millions of taxpayers making Shs 9000 a month to produce Sh18m in taxes, Ruto spends all that blood money in a 48 hr lavish jet trip thanks to borderline personality.Â (kunyonya maskini is a sin and Ruto should seek medical intervention)

He cries in public but inside the flying sh 100m massage parlour, he deceptively hired with taxpayer money, he is laughing at how stupid Kenyans can be.

He cries because, after all the swindles he has committed against Kenyans, he canâ€™t reconcile that with the fact that God has been so kind to him that he is now their Deputy President. Ruto knows that he doesnâ€™t deserve to be Deputy President if ethics laws were to be followed to the â€œTeeâ€.

But power can also come from the Devil, and had his power been from God, he wouldnâ€™t be in ICC. This is how the devil does things. He gives you with one hand, and takes it with the other. He makes you President or is it 50% president, but then throws Genocide accusations against you- puts you on the road to life in prison. Ruto seriously needs to pray. And I know God loves him, and he can help him stop crying at every function.

When Kenyans are watching on TV he is crying. When making money in the corridors of power and making deals behind our backs, he is laughing. Am preaching to Ruto- he needs to repent to God- so he can be healed of this bad disease- Borderline Personality.

Ken Wafula, according to a press release, has recently received threats from Ruto aides for his role in fighting for justice for the ICC victims who were displaced in 2007. Rather than follow Godâ€™s teachings, Ruto hasnâ€™t ordered his aides to stop threatening Ken Wafula with murder. Threatening or even imagining Murder is a sin.

Ruto and UhuruÂ knelt at Swearing-in ceremony not because of humility but DECEPTION. It was aimed at deceiving Kenyans, that now “we have a God fearing duo in State House”.

Uhuru, his kneeling partner is, according to the authoritative Business Daily, accused in court of working in cahoots with James Gichuru to intimidate Standard Chartered Bank to terminate S.K. Machariaâ€™s Royal Card Services credit lines, which led to S.K. Macharia incurring losses and subsequently closing his business. http://www.businessdailyafrica.com/Corporate-News/Uhuru-entangled-in-SK-Macharia-Sh690m-legal-row/-/539550/1882110/-/r4vqv4z/-/index.html. Thatâ€™s your president. Dangerous man.

Welcome to UhuRuto’s politics by deception. The image building driven by insincere gimmicks. Playing with God to achieve a political end. Breaking commandment number 3. â€œDo not take the name of the Lord in vainâ€. Wonder how far this sacrilegious impunity will go. Crimes against God.

Ruto knows for sure that he is one of the most hated men in Kenya. Most of them hate him due to the sins he is alleged to have committed against his own people through corruption cases in which he has been accused.

He wants to use the name of God, and little tears to cleanse his name. He now has made enough. But he will have to return all the goods first, if he is to be accepted in the Kingdom-itâ€™s well laid out in the bible. Thatâ€™s all am saying.

Ruto at the University of Nairobi, as the Christian Union leader, heÂ playedÂ the same game to win Moi’s heart. He knew Moi loved God-fearing people. And so he pretended to be God fearing. Doing anything including playing with â€œGodâ€™s nameâ€ to get his way. Ruto should pray to God, rather than play with God.

As soon as he got wealthy he backslid. Then started abusing Moi- Â the hand that fed him. The bible teaches us to be thankful to those he uses to uplift us. He was not only thankless to Moi, but also to concoct lies against Raila who helped catapult him into a national figure.

We all know that he has been at the center of numerous scandals. And the very first Jubilee Government scandal features Ruto in the “jet massage scandal”. Â

I hearÂ every timeÂ you backslide, you get allocated 7 more demons. So letâ€™s calculate how many demons does Ruto have? He keeps backsliding and I know at least 5 times.

Â·Â Â Â Â Â Â Â  I could even add the Mutunga scandal/ and the 2013 election lack of transparency, plus his involvement in the airport VIP scandal but I donâ€™t wonna scare Kenyans. So (letâ€™s stop at 35 demons)

So besides his Recce unit security, this dude probably has 35 demons hovering around him, if the 7 demon addition rule is to be believed. Thatâ€™s a National Security risk right there and that is why we need to pray for our DP everyday before we sleep.

Even if he were to cry a Tana River or quote all manner of biblical verses, IÂ don’tÂ trust Ruto with half the Cabinet and Nation’s budget. I can bet by 2017 he would be the richest man in Kenya. Just being near Moi between 1992 to 1997, made him one of the wealthiest in Kenya. For every million he gets he makes it 10m through dubious means (alleged). Ruto needs Jesus, for real, and I mean it.

A hallmark of Borderline personality, which Ruto has, is wasteful spending.Â We saw it with Ruto’s Sh18m jet scandal.

It is hypocrisy, for a man who has the hallmarks of borderline personality as evidenced by crying unnecessarily with the intention of controlling, obsession with lavish spending and kneeling to manipulate unsuspecting Kenyan population.

Kneeling is my preferred position to pray at, but when the intentions are to cover-up for other sins, then I ain’t buying that.Â I wonâ€™t be swayed by hypocritical gimmicks, unless Ruto renounces corruption, deception of my God and embraces reform.