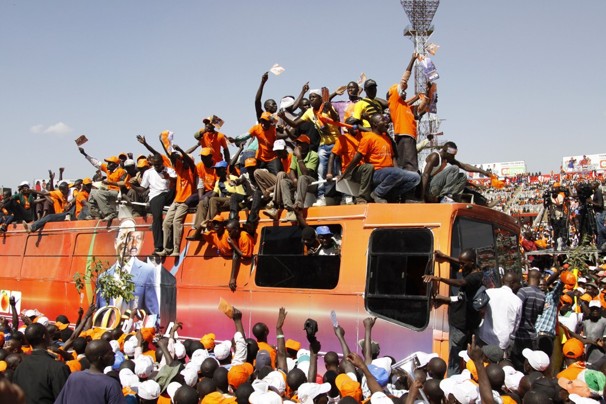 By Oscar Obonyo for the Standard

Reflecting on the campaigns, some allies of the former PM confided in us about an election victory that was within reach but which the team bungled. Although most senior party officials insisted Raila won and his victory was â€œstolenâ€ and the rigging validated by the Supreme Court, some who were at the nerve-centre of the CORD campaigns have for the first time admitted some flaws, which systematically weakened their cause.

Through multiple interviews, we established competing interests, internal wrangles, overconfidence, suspicion, turf wars and lack of a coherent command structure and understaffing played a major role in chipping away at the commanding lead Raila had at the end of last year.

Some pointed out that Raila lacked the ruthlessness of a politician out to succeed. â€œSome party bigwigs were messing up the campaigns and the former Premier knew it but failed to crack the whip, probably for fear of hurting anyone at a critical time when he needed everyone on board,â€ said a close confidant of the former PM who did not wish to be named.

â€œHe was looking into the interests of other politicians and forgot his goal of winning the presidency,â€ he said.

Some insiders also feel Raila spent too much time and resources trying to woo Central Province even when it was clear his support had dropped over time from 15 to 6 per cent. They say Raila went out of his way to portray himself as a national figure at the expense of consolidating his lead in areas where CORD had support.

Disjointed operations in the run up to the actual day of voting did not help advance Railaâ€™s third bid for the top seat.

As late as 3pm on March 3, a couple of hours to the polls, CORD had not identified poll agents in Central Kenya. Railaâ€™s officials did not dispatch agents to the region â€” the backyard of President Uhuru Kenyatta â€” a factor some fear might have given room to illegal top-up of votes. Some of Railaâ€™s supporters are now wondering whether the error was by design or by default, raising suspicion within the secretariat.

â€œWe had no agents in many parts of the country â€“ particularly in Jubilee strongholds. Even in the CORD friendly zones, various candidates used their own resources to mobilise and pay agents. (Hassan) Joho did in Mombasa, Mutula (Kilonzo) and David Musila in Ukambani, as well as Sally (Kosgey) did in parts of Rift valley,â€ adds a national party official.

Email exchanges between Mr Eliud Owalo, the head of the ODM presidential secretariat and the partyâ€™s head of political affairs at the secretariat Ngunjiri Wambugu in the run-up to the elections give a pointer to turf wars, breakdown in communication and disagreements over disbursement of campaign funds and an overstretched team at the ODM secretariat.

In one email, Wambugu accuses Owalo of malice over his queries on the mode of disbursing campaign funds. He also raises the issue of understaffing. â€œWe have people working very weird hours, and literally stretching themselves very hard to just keep all these organised chaos focused enough to be effective without literally breaking down,â€ he writes.

He adds: â€œWith four days to go to the elections and all the work on our hands, I donâ€™t think I can cope with power plays and being second-guessed.â€

Other campaign officials concede the biggest mistake they made was to walk into the campaign as winners. They were not persuaded to work hard.Â  â€œThere were many busy bodies and professionals in the Raila campaign, who made it impossible for practical thinking and execution of affairs.

The worst was their advice that Uhuru and Ruto were international pariahs who would not be elected by Kenyans, hence our relaxed approach,â€ says a senior official. Speaking to The Standard On Sunday yesterday, Wambugu pointed out the emerging lobby groups â€” 87 including those in the countryside â€” impeded campaign coordination.

â€œEverybody wanted to form a campaign baby. I want to think they were driven more by financial gain and not the need to have our candidate at State House,â€ says Wambugu.Â  Among the main pro-Raila lobby groups, were Friends of Raila (Fora), Vijana for Raila, Youth for Raila (Y-Fora), ODM Reloaded, ODM Mashinani, Cord Effect and Integrated Lobbies (OIL).

â€œBesides, I am sure our rivals infiltrated us, I am sure they also stole some of our votes. But we created the environment for them to do this, through our petty internal wars and inefficiency,â€ says Wambugu.

But Sarah Elderkin, a veteran journalist who played an oversight role in the Raila campaign, argues it was the job of the Independent Electoral and Boundaries Commission (IEBC) and not Raila or CORD to prevent poll rigging.

â€œRailaâ€™s team, just like any other campaign team acting with integrity, has no authority or capability inpreventing poll rigging. When the party and candidateâ€™s agents are evicted from polling and tallying centres, and prevented from witnessing, questioning and signing documents, there is little that can be done,â€ she observes.

â€œI do not see why we would not have won all seats in Nairobi, partly it is because most of our parties fielded candidates in the constituencies and wards thereby sharing votes that would easily have gone to one person,â€ he said.

A CORD nominated Senator said the message was not sharp, coherent and consistent, each group were selling different messages that confused the voters.

â€œWhen this is followed by a Supreme Court that acts in a highly questionable manner,â€ she adds, â€œthe innocent protester is left with very little. Let us not engage in a charade of blaming the victim.â€

Owalo, on his part attributed the emerging fault lines to individuals who could have been working with the rivals: â€œThere seems to be a concerted effort to create the impression something was a miss within the campaign that led to Railaâ€™s â€œlossâ€™. Raila did not lose the elections. The vote was stolen.â€

On whether he was high-handed on expenditure, Owalo says his professional background and training dictates he demands adherence to good corporate governance.