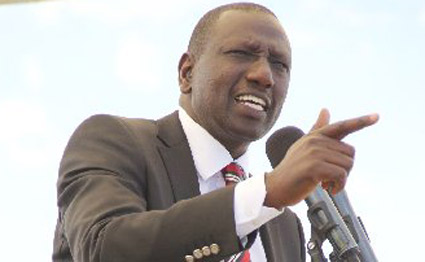 Over the weekend, Deputy President William Ruto kept on referring to CORD leader Raila Odinga as â€˜lemindetâ€™ (Luo) in his ongoing onslaught against the referendum.

This has reminded me of a period leading to ODM Kasarani in 2007 when Ruto, then Eldoret North MP, led an onslaught against Odinga that he was â€˜unelectableâ€™. It took the combined force of Henry Kosgei, Sally Kosgey, Kipkalia Kiprono Kones, Musa Sirma, Lorna Laboso, Mzee Siad Keitanny (deceased) and Jackson Kibor among others to give Odinga a headstart in the rift valley. This much, and more, we will never forget.

Recently I was invited to the South Rift Leaders forum where Bomet Governor Isaac Rutto had called his people â€“ people of Bomet County and South Rift â€“ to explain to them why the referendum is necessary now more than ever before.

The event was at Laico Regency (formerly Grand Regency), Nairobi. The ballroom was packed to capacity with professionals, students, youths, businessmen, politicians and very elderly veteran politicians from South Rift.

Let me from the onset tell you something: If DP William Ruto is going to devise, muster and use intra and inter ethnic fear, hate, pride and or deeply entrenched cultural and political beliefs, perceptions and worldviews to fight Gov Rutto and the â€˜lemindetsâ€™ of this country over this referendum issue, he is in for a rude shock.

Back to Isaac Rutto.

Listening to participants in the South Rift Laico meeting, I couldnâ€™t help but admire the organization of the event, quality of presentation, decorum, use of the kipsigis dialect (which was the default medium of expression) and the urgency and agency of it all.

From Lawyers Kimutai Bosek (presented legislative threats to devolution) academician Bill Ruto (who gave a history of the long treacherous road that devolution has gone through, from the 1960s to date), Paul Kurgat among others, referendum was given a context that William Ruto will not manage to trivialise by spewing propaganda that it is the â€˜lemindetâ€™ pushing it.

During the whole meeting, Gov. Isaac Rutto, himself a long serving legislator, asked his people to â€˜decide for themselvesâ€™ whether they want the resources and power to be moved closer to the people as aspired by the constitution, or, all of it to remain at the national level as is currently the case.

Unknown to many people, Gov. Rutto revealed to the keen participants that even the â€˜not less than 15%â€™ to counties that is in the constitution was â€˜sneaked inâ€™ by now Mbita MP Hon. Mille Odhiambo. â€œThe enterpriseâ€ had proposed â€˜not more than 15 per centâ€™!

DP Ruto is used to politics of extreme lies and petty propaganda. Sample this: In Bomet yesterday, as captured yesterday, DP Rutto was accusing Raila Odinga of â€˜selling lands when he was PMâ€™.

Thatâ€™s because currently, through cabinet secretary of lands, the jubilee alliance is on high voltage land title deed propaganda politics which is punctuated by â€˜thousands of filesâ€™ being â€˜retrievedâ€™ left right and centre.

For every file retrieved at the lands office in Nairobi, Thika or Lamu, they have â€˜launchedâ€™ it and, or, â€˜presided over itâ€™ in the media as if such files have been retrieved from James Orengoâ€™s bedroom, or Raila Odingaâ€™s rural bondo home!

Heck, all those files have been â€˜retrievedâ€™ â€“ found â€“ from, and, or, in the respective â€˜lands officesâ€™ â€“ where they rightfully were.

You accuse Raila of selling lands â€˜when he was PMâ€™. You say thatâ€™s why people should reject referendum. Seriously? I thought you were in court the other day for GRABBING poor farmer Muteshiâ€™s land and the court found you guilty as charged? Did â€˜lemindetâ€™ sell it to you? NONSENSE.

Finally, to set the record straight, I am a great admirer of the Bomet Governor. I have gone through the 10 issues he and other like-minded governors want to sort out and the support to those issues are shared.