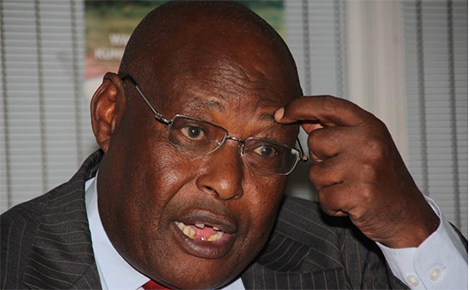 By Phil Wesonga
The appointment of Francis Xavier Ole Kaparo is an insult to the thousands of youthful Kenyans who subscribed to the fallacy of #MyDNAisTNA, and blindly swallowed the colourful Jubilee Harmonised Manifesto titled “Transforming Kenya” that, inter-alia, falsely promised to empower youth through “a deliberate and systematic effort to appropriately equip and empower the youth of Kenya to attain and realize their full potential”.

For the records, Kaparo – 68 years old today – voluntarily quit public office (as Chairman of National Environmental Management Authority) to establish the URP outfit through the most venomous tribal alliance, to pursue public office. Prior to that Kaparo had served 15 years as a KANU nominated speaker of the heavily divided 7th, 8th and 9th parliaments, where he also held the fort for former President Moi and frustrated the young turks then.

Today, more than 20 years later, the â€œdigitalâ€ Jubilee administration has adjudged him best suited to bridge the highly divided Kenyan society. As speaker of the national assembly, Kaparo frequently banished the press from covering parliamentary proceedings especially when such debates showed government in bad light.

Kaparo made no secret of his KANU leanings, often waiting for KANU to pass resolutions at their PG meetings before making rulings on critical issues. One wonders also how Kaparo will bring lose canons like Moses Kuria to book? How will Kaparo reprimand his fellow URP NEC member Duale for disparaging Luos or Kambas?

How will the Chairman of a party that did not step into Western, Nyanza to campaign ever deliver justice or cohesion to these regions? Or how Kaparo ensure an IDP like Adrian Muteshi who DP William Ruto had displaced is respected and loved by the DP and the residents of the area he owns land which predominantly occupied by Rutoâ€™s supporters? For all intents and purposes, this appointment can be interpreted as an endorsement of a return to the old order.

The Jubilee Government is showing Kenya that is not any different from the autocratic KANU government and are hell bent on making Moi era seem like childâ€™s play. Is your DNA still TNA?