Chelagat Mutai: Veteran of another liberation; not this one

I refused to mourn Mutula Kilonzo. I was saddened when George Saitoti and Orwa Ojode died in a plane crash; because no death can be so brutal like one where you stare haplessly and helplessly. Because I have an opportunity to be on a plane, the heavens can be scary, but I digress.

Â Chelagat Mutai is dead. She is dead without much social fun-fare, the usual media hullabaloo; or, our famed bipartisan respects for the political dead. Here is a woman whose death is so distant to my generation and our apathy to history.

In Marjorie Oludhe Macgoye’s Coming to Birth, the name Chelagat props up in a conversation at the M’s family where a ‘general factotum’ called Paulina feels its important for women to collect themselves and ‘riot’ over the incarceration of this ‘little kalenjin girl’, accused of inciting his constituents to forcefully invade some land grabbed at Ziwa. This is 1976; the second decade just after independence, with old Jomo presiding over the government of man in this country.

The death of Chelegat in political obscurity is a final fatal blow to the woman. That she lived to see the first 100 days of the scion of the man whose government put her behind bars is brutal;and, tragically, that the deputy to this younger Kenyatta inherited her constituency, Eldoret North, from where he ‘shot’ to the presidency, must have disturbed her to ask: “what liberation did I fight for?” and conclude in another retrospection: “was it worth it?”

Sometime in June 2011, Chelegat reappeared in the public limelight after a long absence. She was a pale shadow of her former self; the pitiable sight of Mutai, on a wheelchair, after having called on former Prime Minister Raila Odinga for medication vindicated all those women who sung KANU songs and wore both Harambee and Nyayo apparels.

Mutai’s sorry situation must have been morally comforting to both the men and women who gave the struggle for freedom, and rebirth of multipartyism, a wide berth. Her final rest has proven many kenyan reactionaries of that era-today’s wealthy elites of the Kenyattas, Mois, the Koinanges, the Mungais, the Barngetunys, the Omamos, the Gichurus, Michukis, the Biwotts and so many others that sycophancy and loyalty paid off; for these named few can afford the best medication in any part of the world for both the misfortune and the physical infirmity which befell Mutai.

Often, when history repeats itself as a final tragedy, it gets ruthlessly brutal. It devours noble causes, exacts human dignity as its revenge; annihilates the collective memory of the glorious vistas our pasts and sends a threatening message to the future that just as pious Karma, she, history, is a roving fiend, a bitch!

Â Mutai will be eulogised in the weeks to come by very queer people living here in Kenya. Hers will be another of those rare occasions when death puts a smile in our faces; because I can see the hassle that her painful end will excite among the many politicians fighting to control the common sense of the average CORD and Jubilee supporter.

Sometimes, we just have to admit it. The revolution to which Mutai gave her last ‘full measure of freedom’ was a flop; independence to both the landless of the Rift Valley and a great many in other parts of Kenya never really materialised, and we have mounds and mausoleums to show for our admissions; death tombs of the brave men and woman who had to die so we could have this country, this nation, and this government as we know it today.

Â Yes, Yes, Yes; let me admit it here again: Chelagat Mutai is a veteran of a liberation, sadly, it is not the one we currently ‘enjoy’ 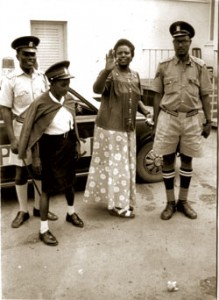