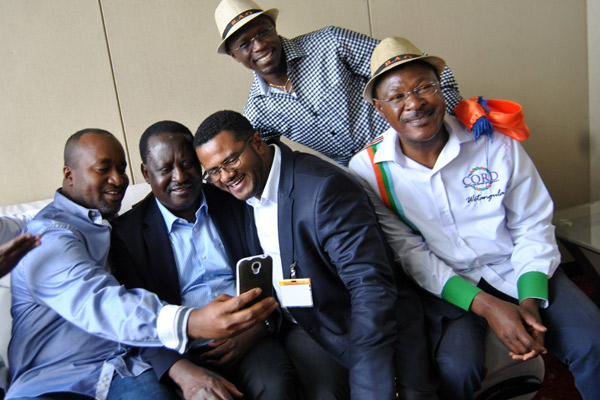 By Hon Ababu Namwamba
Mr President, I salute you, and do pray this finds you well. I write to you both as a patriotic citizen of our land, and as a leader duly elected to represent the people of Budalangâ€™i in our National Assembly.

Please grant me your indulgence to address you on this unfolding referendum debate. Sir, you obviously know you reign over a country faced with truly daunting challenges. Ethnic divisions and tensions, particularly, continue to poison our national relations and discourse.

Kenyans seem more divided today than ever before, as frustration, disillusionment and fear push more of our people into despair. There is widespread feeling that your Government is insensitive, unjust, opaque, arrogant and exclusionist . . . largely a preserve of the elite of the two tribes at the heart of your Jubilee Alliance.

Whatever your advisors and court jesters may tell you, these sentiments are real. And please do not mistake the apparent â€œcalmâ€ to mean people are at peace. Martin Luther King observed that true peace is not merely the absence of tension: it is the presence of justice. A vast segment of Kenyans feel injustice everywhere.

From the high cost of living worsened by punishing taxation and unemployment, to the skewed sharing of the national cake. Mr President, Kenya yearns for a healing moment. The country craves demonstration of leadership that is strong but accommodative, bold yet patient and humble. Leadership that is valiant enough to break the glass ceiling and go beyond small-minded political jingoism and short-sighted tribal xenophobia.

Leadership visionary enough to cherish inclusivity, aware that be it verdant green or barren dry, a tree makes not a forest. Many Kenyans would love to see you and opposition leader Rt. Hon. Raila Odinga reach out to each other and engage objectively on ways to fix what ails our land, especially the vexing challenge of bridging the ever widening ethnic chasm. I believe both of you mean well for the country, or donâ€™t you? Which brings me to my chief reason for writing to you, Sir. Mr President, it is a historical fact that yourself and Rt. Hon. Odinga have previously joined hands to achieve some important milestones for this country.

In 2005, you rallied together to defeat a bad draft constitution in a historic referendum of November that year. From 2008, you worked together in the grand coalition government, helping Kenya move forward after the post-election pogroms.

In 2010, you both sailed in the same YES vessel that delivered the Constitution that governs Kenya today. Now your big brother Raila has proposed that we take a fresh look at this Constitution, to improve it to better manage affairs of our country. I respectfully implore you to give this proposal some serious consideration. Do not dismiss it with the kind of cavalier attitude displayed by some of your acolytes. I will give you three reasons.

One, this is a superb opportunity to smooth any wrinkles in our Constitution. I co-chaired the Parliamentary Select Committee that struck the political compromise on the draft in Naivasha, ahead of the August 2010 referendum. Both you and your deputy William Ruto were key members of that committee.

We all held the view that the draft should have been refined by the Committee of Experts and Parliament, which did not happen. Mr Ruto then went on to lead the NO campaign that strongly opposed this Constitution. Could there be a better opportunity to do the clean up than this? Democratic constitutions such as ours are sacrosanct. But they are neither holy writ nor divine edicts like the Bible or the Quran. They can be made, unmade and remade. That is why every constitution provides for its own amendment, or even replacement.

The American Constitution, which has pretty much been the yardstick for many libertarian constitutions since it was adopted at the Constitutional Conference in Philadelphia, Pennsylvania on September 17, 1787 provides some useful lessons. Since coming into effect on March 4, 1789, it has been amended 27 times, with over 10,000 amendments introduced in Congress since 1789. But the key point here is the timing of the maiden change.

The historic first ten amendments were proposed by Congress on September 25, 1789 â€“ just six months after the constitution came into effect. Any argument that it is too soon for us is baseless. Two, rallying the country around a national agenda as important as revising our Constitution may just turn out to be the catalyst needed for the journey of healing the historical wounds that are ripped open every election cycle. We never quite seized the moment in 2010. But success is a journey, not a destination.

On this journey, we must appreciate that no single individual, however powerful, no single political formation, however influential, no single community, however populous, can achieve much on their own. Three, a referendum that helps seal the new dispensation while planting seeds for unifying the nation would undoubtedly cement your legacy for eternity. You will not be President forever.

Leave an indelible mark on Kenya; be the commander-in-chief who marched the country across the Rubicon, from the wilderness of uncertainty to the promise of a united nation at peace with itself. The buck stops with you! Thank You, Sir.