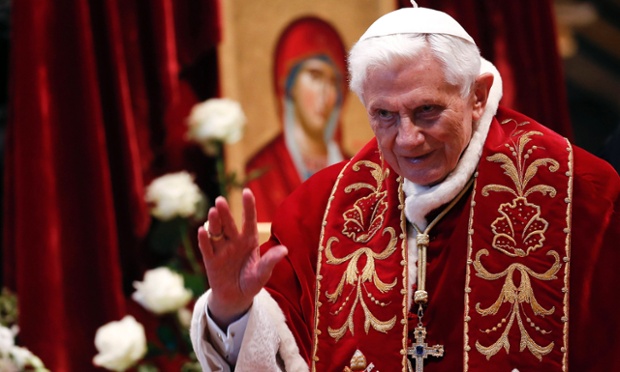 Pope Benedict XVI announced Monday he will resign on February 28 because his age prevented him from carrying out his duties, an unprecedented move in the modern history of the Catholic Church.

These are the main reasons the pope gives for his resignation in his statement this morning:

â€¢ His “advanced age” (he is 85) means he is no longer able to carry out all his tasks adequately.

â€¢ Both strength in mind and body are necessary for the job of pope, he says, and in the last few months such strength has deteriorated in him.

He also announced in the statement that he would renounce the office of Bishop of Rome at 8pm on 28 February.

He says a conclave will have to be convened to elect the new pope.

And he says he wishes to continue to serve the church “through a life dedicated to prayer”.

“After having repeatedly examined my conscience before God, I have come to the certainty that my strengths, due to an advanced age, are no longer suited to an adequate exercise of the Petrine ministry,” the 85-year-old pope told a meeting of cardinals.

“In order to govern the bark of Saint Peter and proclaim the Gospel, both strength of mind and body are necessary, strength which in the last few months, has deteriorated in me to the extent that I have had to recognise my incapacity to adequately fulfill the ministry entrusted to me,” he said.

“For this reason, and well aware of the seriousness of this act, with full freedom I declare that I renounce the ministry of Bishop of Rome, Successor of Saint Peter, entrusted to me by the Cardinals on 19 April 2005, in such a way, that as from 28 February 2013, at 20:00 hours, the See of Rome, the See of Saint Peter, will be vacant and a Conclave to elect the new Supreme Pontiff will have to be convoked by those whose competence it is,” he said.