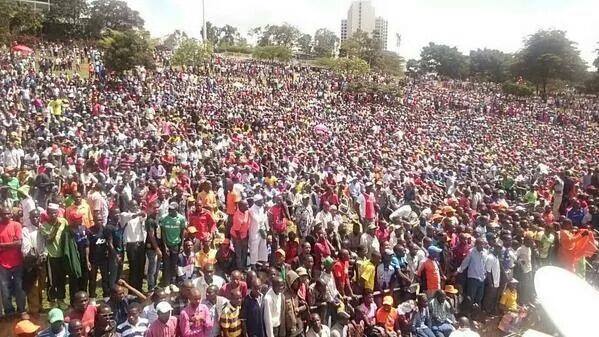 Most of the views being proffered by Kenyans on both sides of the political divide on the significance of the Uhuru Park meeting today are parochial and narrow minded, limited to the short term political interests of TNA and CORD. But something more significant happened today.

In every constitutional democracy, the supremacy of the people is greater than any government or institution. The people retain the power to address their government or other institutions directly, regardless of the fact that they have elected a National Assembly. This they can do by petition, picketing or demonstrating. In extreme cases, they can result to civil disobedience.

The Kenyan Constitution 2010 for the first time asserted the supremacy of the people over government, institutions and even the Constitution itself.

So what happened at Uhuru Park today? The opposition, exercising the constitutionally right of the people to demonstrate against the government, brought together like minded Kenyans to send a message directly to the government about their dissatisfaction with it. The government in power respected their right to do so and the police licensed the rally and provided security for it.

Similar meeting are planned all over the country.

If they are all well attended, then the message will be clear to the government that the people are not happy, and that regardless of how many legislators it controls, the people remain supreme and could result to civil disobedience against it.

And no right thinking government would want to challenge the supremacy of the people over it by quoting parliamentary majorities and constitutional provisions.

So, are you still asking what happened at Uhuru Park today ?