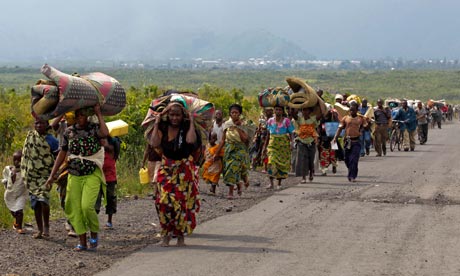 By Odhiambo Levin Opiyo via FB

Haiti and the Congo factor.
DRC has been beset by political violence for decades despite being one of the richest countries.
Even though this may be attributed to external forces and economic factors, rebellion among the Congolese is a deeply entrenched culture that dates back to the period of Kongo Kingdom.
Of the five major Central African kingdoms that were located in the Congo Basin, the Bantu kingdom of Kongo remains one of the most historic.
Its history dates back to one of the largest and longest movements in human history, the Bantu migration, starting from West Africa in around 1000 BCE.
The ancient territory lines created by the Kongo Kingdom leave the descendants of the Kongo fragmented between three present-day countries.
Many of them are in the Democratic Republic of Congo, while others are in Congo Brazzaville and Angola.
However, the Kingdom was plagued by a series of internal conflicts and experienced one of the longest civil wars that lasted from 1665 and 1709, over who was to be King.

The decline of public order created a perfect environment for the capture of Kongo kingdom subjects,who were sold to local merchants, and brought to the coast for resale as slaves.

French and English shippers sent them to Saint-Domingue in the present day Haiti and Dominican Republic.
That’s why the story of Haiti can never be told without studying the history of the Kingdom of Kongo.
Slaves from the Kongo Kingdom made up the majority of those imported into Saint-Domingue before the Haiti revolution.
David Geggus, who studied plantation inventories in Saint Domingue, concluded that in the 1780s “Congos” made up 60 percent of the slaves in the North Province, where the Haiti revolution began, and about the same percentage in the south.

They were common and influential enough among the rebels that Congo became a generic term for the rank and file of the slave rebels .
The most popular early leader of the revolution, Boukman Dutty, though certainly not a Kongolese himself, was still known by a Kikongo nickname, Zamba (probably nzamba, or “elephant,” )

Some historians have always considered the enslaved Kongolese as the ideological source of the Haiti Revolution.
This is because the civil wars that plagued the Kingdom of Kongo were fought at least in part to resolve constitutional issues and determine who was the king of Kongo and what were his powers.

Many of those enslaved and eventually sent to Saint-Domingue had served in Kongo’s civil wars or were caught up by them. And it is most likely that the issues that shaped the civil wars in Kongo might well have shaped a different civil war in the Caribbean.
In other words the Kongolese slaves brought their ideological orientation to Saint-Domingue (Haiti).

In June 1793 after a body of rebellious slaves had raided and looted Le Cap François (now known as Cap Haitien in Haiti) their leader, known as Macaya, retreated to the hills and swore allegiance to the king of Spain, who had supported the rebellion for some time.
When Étienne Polverel who had been sent to suppress the revolution tried to persuade him to return to the republic, Macaya wrote back:
“I am the subject of three kings: of the King of Congo, master of all the blacks; of the King of France who represents my father; of the King of Spain who represents my mother. These three Kings are the descendants of those who, led by a star, came to adore God made Man.”
It is therefore not by accident that the Congo and Haiti have continued to suffer cycles of violence, invasion and repression for most of their subsequent histories.

While the Independent Haiti had the totalitarian Papa Doc Duvalier, the Congo had the despotic Mobutu Sese Seko.