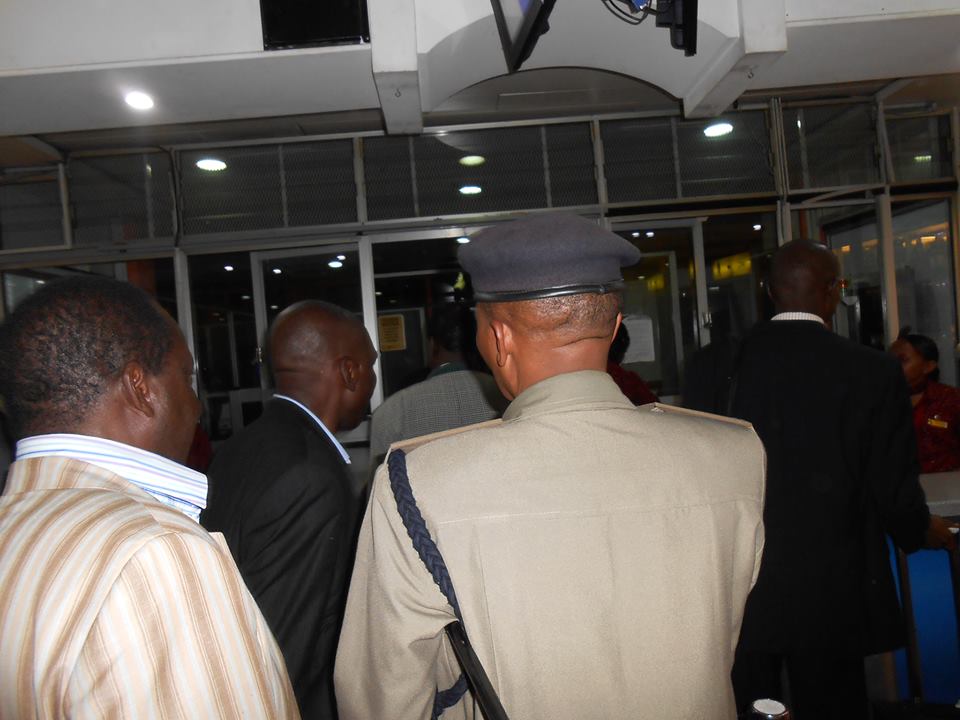 Raila Odinga going through gate 5 of terminal II at JKIA yesterday evening after he was denied VIP access.

It has come to the public notice that the Jubilee government is trying to intimidate and diminishing the person of Rt Hon Dr Eng Raila Amolo Odinga (Immediate Former Prime Minister of Kenya) and Peopleâ€™s President, the African eminent person.

Let me start by saying that Long Live Rt Hon Raila Amolo Odinga, we celebrate the good work he did in the second liberation ofÂ  this Country, had it not been for rigging you could have given better andÂ  good leadership to the country and the region at large

I want to inform Uhuru Kenyatta and his friend William Ruto that, the disrespectÂ  served on Rt Hon Prime Minister is a confirmation that they are forces of darkness keen to take this country back to dictatorship

Let me be clear that if they wonâ€™t stop such stupid thoughts and acts of denying our former Heads of States the respect they ought to be given; we will also not respect them since the reality is that we did not vote Uhuru and Ruto. They stole from us; they are still intimidating us, and are signs of death root they are showing us.

Rt Hon Raila Odinga is the immediate former Prime Minister of this republic, He won the election in 2007, but you stole from him, again in March 4th 2013 He won, you people stole from him, He is one of the Heads of this state, and he deserves right respect and opportunity given to all former heads of state.

In that reason, I want to condemn in the name of our Lord Jesus Christ the act of denying our Leader the use of the VIP lodge at the airport and Government MUST apologies for the act or else, we are seeing a looming Nation disrespect and we wonâ€™t accept it.

So whoever issued such orders should withdraw and apologies publicly. Respect is a vise viser