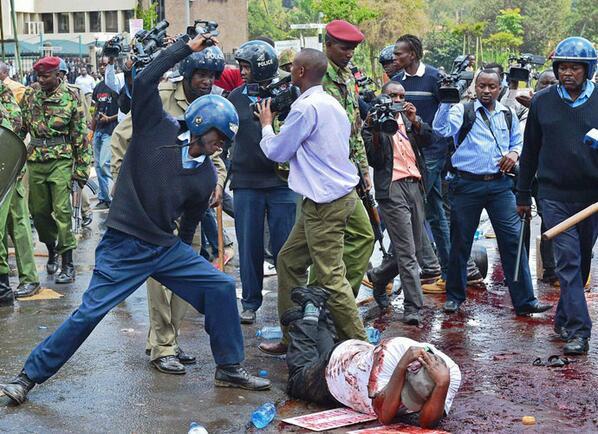 A little over two months ago, Kenyan voters were harangued into queuing up for hours in the hot sun to cast a vote. “Go out and vote” was the mantra parroted by everyÂ pundit, columnist and anchor. Someone was slapped on an internet video for saying he wouldn’t vote. The message was clear: if you don’t vote, you have no right to speak.

Well, Kenyans, in their millions did exactly as they were told but today it doesn’t seem to have made much of a difference. In fact, voters seem to have even less of a say in how the country is run than they did previously. On Election Day, we were urged to vote and then go home. WhenÂ murmuring begun about suspicious technology failures and inconsistent tallies, public protests were immediately banned. The media went into over-drive, providing non-news and calling for patience and peace.
Neither was much heard from the people of Garissa when a security operation supposedly cracking down on terrorists was carried out by what government officials called “a rotten team” and seemed to only target non-terrorists. When citizens in Bungoma decide to highlight the spate of brutal gang attacks that have claimed tens of lives in the last few days, the authorities respond with clubs and tear gas.
Even when the voting public is allowed to speak, it seems rather easy to ignore them. Howls of outrage do not seem to have any effect on elected representatives’ determination to gerrymander constitutional checks on their greed. When reminded of the recall clause, MPs smugly point out the fact that it doesn’t kick in till two years into their term. The sub-text: “We can afford to ignore you till then.”
I think the MPs scorn underscores what the citizen’s role in the Kenyan version of democracy is. An advertisement now running on Kenyan TV also alludes to it. In it, young celebrities praise us for the peaceful voting and acceptance of the outcome. “Tunawacheki! (We are watching you!)” the successful candidates are warned. The kicker: Five years is not a long time.
And there it is: citizen involvement reduced to the act of voting, the act of expressing a preference. Vote, then shut up till the next election. Military folks have a term for weapons that do not need active human guidance once deployed. Fire-and-forget. In Kenya, the prevailing sentiment when it comes to the politicians we have deployed seems to be: “hire-and-forget.”
But citizens are an integral part of the democratic system, of ensuring that the elected deliver on what they have promised, of protecting the country and the constitution. Â We may have devised systems of checks and balances as well as created institutions to these, but they all only act on our behalf. The ultimate responsibility for the defense of the realm lies with us.
However, this is not the narrative we hear. Today we are exhorted to forget politics and focus on building the nation. The voices that were urging Kenyans to participate in democracy prior to March 4 seem to have fallen silent.Â It seems that casting a ballot was all the citizen was required to do. Once you did that, you had done your part, and could go back to your normal business. There is little call to any follow-up action. Though one might still hear a few isolated voices such as the activist Boniface Mwangi or Okiya Omtata, the new norm seems to be an increasing reluctance, perhaps fear, even intolerance, to challenging the official stance.
Yet, to my mind, citizens should be doing more than keeping a silent 5-year vigil. I wish for a vibrant and engaged people demonstrating, querying, debating. Challenging official truths. Expressing passion, outrage even. Discarding the stupefying relief at surviving yet another election. We should no longer accept a role that reduces us to dumbocrats. To be seen every half decade but not to be heard in the intervening period. LikeÂ French general Charles De Gaulle, we should realise that politics are too serious a matter to be left to politicians.
Read more of Gathara’s thoughts and opinion here> http://gathara.blogspot.nl/2013/05/the-hire-and-forget-dumbocrats.html